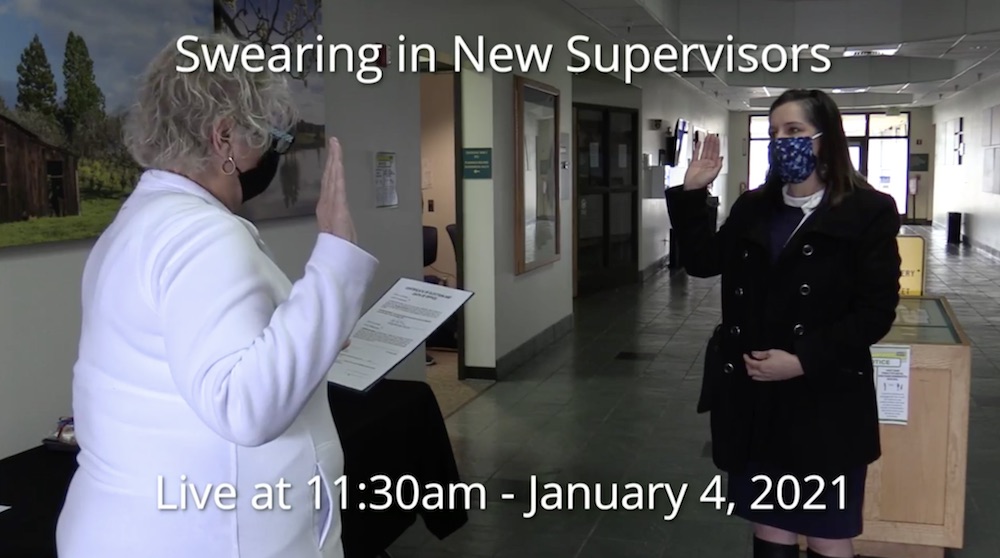 MENDOCINO Co., 1/4/20 — After a competitive primary election this March and a close race this November, Mendocino County’s two newest supervisors, Maureen Mulheren and Glenn McGourty, were sworn in this morning, and officially took their positions at 12 p.m. today. The swearing in ceremony occurred at a special in person event at the county’s administration office on Low Gap Road in Ukiah, and will mean that Mulheren and McGourty will beginning representing the second and first districts at this first board of supervisors meeting of 2021 happening tomorrow.

The election of Mulheren and McGourty meant that four out of the five current supervisors in Mendocino County are currently in their first term in the office, since District 3 supervisor John Haschak and District 5 supervisor Ted Williams were elected to the position for the first time in 2018. Dan Gjerde, who represents District 4, is the only sitting supervisor who has won multiple elections to the board. McGourty will replace Carre Brown, and Mulheren will replace John McCowen, both incumbents who declined to run for re-election.

Here’s the office live streamed video shared by the County of Mendocino of today’s ceremony, below. McGourty’s ceremony starts at minute 2:45, and Mulheren’s starts at about the 23:50 minute mark. The full agenda for the first board meeting for 2021, happening on January 5, can be found here.