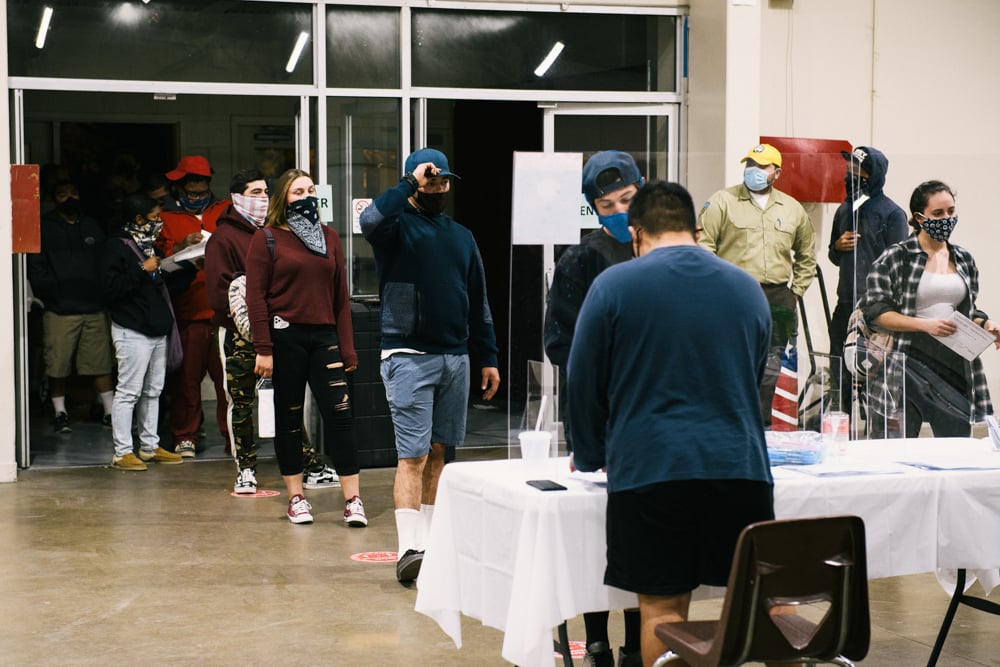 A line of voters wait at Carl Purdy Hall in Ukiah on November 3, 2020. Election workers at the polling station said they noticed a lot of young people showing up to register to vote today, that there were overall less people who voted this year than in 2016 and 2018, and that people overall were more suspicious of the voting process than in years past. (Alexandra Hootnick for the Mendocino Voice)

WILLITS, 11/25/20 — Yesterday evening the Mendocino County Elections Department finish their count of ballots (though this morning they added on last ballot), and finalized the results for the 2020 general election. There were no substantial changes since the last results came out, though a couple close elections did get decide definitively. The Ukiah City Council race saw a small upset, with incumbent Douglas Crane holding his seat, but with Josefina Dueñas beating out incumbent Stephen Scalmanini. Now officially supervisors-elect Glenn McGourty and Maureen Mulheren carried their districts handily.

In Willits both measures K & I carried, meaning that the City Willits will slightly raise sales taxes, and the school district will float a bond.

The full results can be view at the county’s website, below are a few key races. In the tables below winners are in bold.

Also at the Willits Unified School District Dianne McNeal and Alex Bowlds were elected. In the Round Valley Unified School District, Lew Chichester and Tony Tucker won. In Fort Bragg Unified Kathy Babcock and Mary Jean Makela will be school board members. In the Point Arena school district Sigrid Hillscan, Miquette Thompson, and Bob Gardiner are school board members-elect. And in Potter Valley Community Unified Shannon Aiello, Erin Kile, and Elaine Lindelef were elected to the school board. For the single short term seat up for grabs on the Ukiah Unified board Susan Ashbury was the winner.

Though our tiny county matters little to the grand sweep of the federal election, the percentages in the presidential race do say something about the political opinions relative to the rest of the country. Nationally president-elect Joe Biden won 51.1% of the vote with President Trump carrying 47.2% of the vote (as of today, Nov. 25). In California Biden won 63.6% and Trump 34.3%. In Mendocino County Biden got 66.41% and Trump 30.61%, showing Mendo as substantially more liberal than the country and somewhat more than the state.

Representative Jared Huffman did even better than his Democratic colleague racking up 70.03% of the vote in Mendocino County, and 79.3% California House District 2. Assemblyman Jim Wood, also won a large majority with 68.42% of Mendocino votes, and 71.7% of votes across California Assembly District 2.

A couple key services district races were settled. In the town of Mendocino four seats on the community services district board were up, two short term and two long term. James Sullivan and Dennak Murphy won the long term seats, and Margaret O’Rourke and Christina Aranguren won the short term.

In the Ukiah Valley fire district Robert Banks won in a blow out.

Measure K, City of Willits
Enacts a 3/4 cent sales tax to “prevent the elimination of police services; street and sports field maintenance; closing of city facilities; and loss of other essential city services.” Passes with 55% of the vote.

Measure I, Willits School District
This measure was voted on by all people in the school district which is far larger than the city. It’s a $17 million bond measure with an according hike in property tax. Passes by simple majority

Willits City Council
Willits could not drum up enough interest in the race and only the incumbents declared to run. In this race the conclusion is foregone, all three will win, the only question is in what percentage.