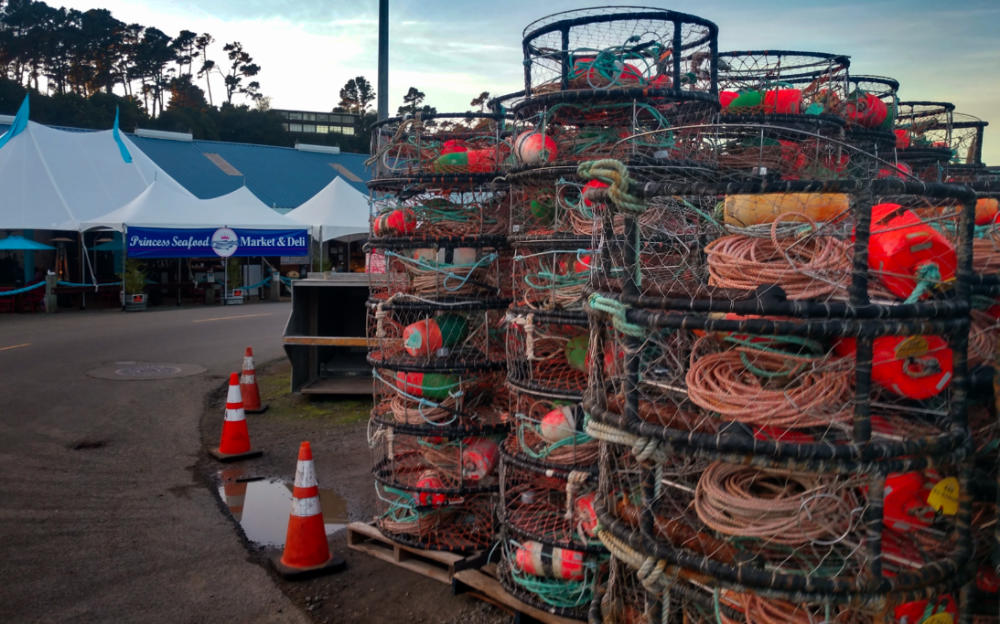 FORT BRAGG, 12/23/20 — Santa’s arrival is more likely for Christmas dinner than fresh California Dungeness crab. The commercial crab season officially opened today, Wednesday, Dec. 23, but no boats left Noyo Harbor this morning, as the crab fishers say the price offered is too low and are sticking together for a higher price. The delay could last into 2021, but hopes are for a deal to be negotiated between crabbers and processors just after Christmas, as negotiations are now postponed until then.

“We are not setting traps. Nobody is going out. We had an offer of $2.25 per pound from the largest processor and that is too low,” said Scott Hockett, owner of the Ace fishing boat and the Noyo Fishing Company in Noyo Harbor.

Hockett was on a phone call between the fishing ports up and down California and Oregon this morning where everybody agreed they would not fish for crab until higher prices can be achieved. “From Cape Falcon South, [in northern Oregon] everything is tied up. We are all trying to back each other,” said Hockett.

Last year the wholesale price was $2.87 per pound Hockett said. This year the fishers seek a price in the $3+ per pound range, according to a story in the San Francisco Chronicle.

Retail prices of crab can vary between $6 and $16 per pound in local grocery stores, when available. Despite the season being closed, Princess Seafood Market & Deli in Noyo Harbor had crab for sale this morning, from Washington State, for $9.95 per pound. On the other hand, Harvest Market at Mendosa’s in Mendocino said they wouldn’t have crab until the first of the year.

The initial price crabbers get from processors is key to the whole season in crab fishing because most of the catch comes early, local crab fishers say. Crabbers say as much as half the haul for the season can be caught in just the first few days of the season.

Hockett said there have been higher offers from some smaller processors but the fleet is working together to get prices that can cover their costs. The state’s largest processor, the Pacific Seafood Group, set the price at $2.25 per pound earlier in the week — and Hockett says the price Pacific Seafood sets determines the price for the entire market.

Rick Harris, Regional General Manager for Pacific Seafood provided a statement to the Mendocino Voice about the matter:

“We can’t speak for other processors, and we are one of many buyers, but we’re actively working with the fisherman who fish for Pacific Seafood and the fishermen associations in the ports where we do business. This year is especially challenging for all parties involved given the significant drop in demand due to restaurant closures and event cancellations. The associations have communicated to us that they would like to postpone crab negotiations until after Christmas. Discussion will continue after Christmas and Pacific Seafood looks forward to deliveries of fresh, Dungeness Crab soon.”

There are about 30 crab boats that fish out of Noyo Harbor, Hockett said. “Insurance is more expensive this year, crab traps are more expensive, our costs are all up,” Hockett said. He said although restaurants are shut down, the crabs sold in the first few weeks mostly go into the freezer.

“The retail price consumers pay for Dungeness crab reflects all the costs incurred along the way from harvesting, processing, distributing, and storing the crab while adhering to strict regulatory rules to ensure food safety and high-quality product. “

“Government closures of restaurants and ‘stay at home’ orders have caused restaurant and food service demand to fall by more than 70 percent. This in turn can cause excess inventory to build up. At the same time, the pandemic has resulted in strict restrictions on employment leading to labor shortages and increased production costs. These concurrent pandemic factors of lower demand, higher inventory, and increased costs are putting pressure on everyone in the supply chain — fishers and processors alike,” Ogan said.

The season had been delayed due to worries about migrating gray whales becoming entangled in the ropes that are used to tie surface floats to crab pots on the ocean floor.

Ryan Bartling, scientist with the California Department of Fish and Wildlife, said the grays have most all migrated South to their breeding waters and other great whales are not currently being seen off the coast.=

“Whales are always present off our coast but abundance varies depending on the time of year, even across species. Most Humpback and Blue whales leave our coastal waters during the winter months. Gray whales begin their northern migration in the late winter and early spring months,” said Bartling.

The next big peak for gray whales is in March. Bartling said the crab fleet goes where the crabs and the crab buyers are.

“There are about 550 permits in California and typically we see about 450 boats participate each year. The fleet is somewhat mobile and does transit the coast on the hunt for crab and to fulfill specific markets. That said several local boats stay close to their home port and supply local markets including dockside sales,” said Bartling.