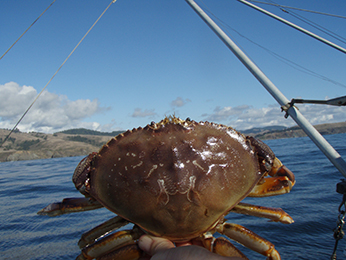 MENDOCINO Co., 10/29/2020 — The commercial Dungeness crab season will be delayed until December 16 in Mendocino, Humboldt and Del Norte Counties, the California Department of Fish and Wildlife announced last week.

This is the second delay. The original opening date was November 15.

“The quality test is to assure that we have filled out crab in time for the scheduled opener,” said Juhasz over the phone. “We just didn’t have a valid enough sample to make a good judgement from the rounds we were able to do. We are going to attempt one more test in order to have a better idea of whether or not the quality is sufficient.”

According to the Tri-State Dungeness Crab Committee, Department of Fish and Wildlife management areas must sample at least 300 total pounds of crab in order to accurately represent the whole fishery. Then, the Department must find that at least 24% of the crab’s total weight is meat, in order to open the season.

The Tri-State Committee, which includes Washington, Oregon, and California, was created by the Pacific States Marine Fisheries Commission to increase coordination in the industry.

CDFW scientist Christy Juhasz explained that the crabs they did sample passed the test, but that they weren’t able to collect the 300 pounds of crab required by the Tri-State Committee.

“This is indicative of a low crab year,” said Juhasz, “But we don’t know what that will look like when the season begins.”

Under these circumstances, no one is allowed to take Dungeness Crabs in these areas. If they do, they will be banned from participating in the season for the first 30 days that it is open.

The next round of testing is on December 1, and Juhasz is hopeful that they will be able to acquire enough crab to get a proper sample and open the season as soon as possible.