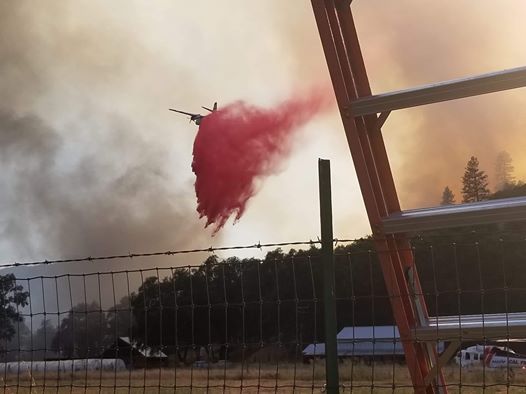 UPDATE 8/12/20 7:10 p.m. — The Mina Fire is now fully contained at 177 acres in size, according to Cal Fire’s evening update. The fire did not grow significantly after it began on August 10 at around 5 p.m., and the cause is still under investigation.

There are currently 28 personnel on the scene, and some will stay on the fire for the next several days, and potentially into the weekend; Cal Fire notes “fire suppression repair has begun to minimize the effects of the fire’s damage.”

UPDATE 8/12/20 7 a.m. — The Mina Fire near Covelo is now 90% contained and has not grown since yesterday. Crews remain at the scene to deal with hotspots and shore up containment.

UPDATE 8/11/20, 7:05 p.m. — The Mina Fire outside Covelo is now 70% contained, according to Cal Fire’s most recent update, and fire personnel will remain on the the scene overnight to watch for “hot spots” and continue mopping up. The fire did not increase in size over the course of the day, while crews made good progress on containment, which increased significantly from 40% this morning.

The agency shared this map of the fire in the morning’s update as well:

UPDATE 8/11/20, 1:30 p.m. — The Mina fire near Covelo is 50% contained and is at 177 acres. Crews are working to increase containment depth while managing hotspots such as burning trees, stumps, and other hazards. There are 15 engines, three water tenders, and four hand crews working the fire. One structure was destroyed, and there were no injuries. The cause of the fire is still under investigation.

Evacuation warnings in the area were lifted by the Mendocino County Sheriff’s Office last night.

UPDATE 8/11/20, 12:35 p.m. — The Mina Fire remained at 171 acres in size, and is now at 50% containment. Containment increased from 30% to 40% overnight according to this morning’s update from Cal Fire, at around 7 a.m, and the forward spread of the fire had stopped. All evacuation warnings in the area were lifted by the Mendocino County Sheriff’s Office last night.

Smoke may continue in the area, although current air quality levels are “good” throughout most of the north coast as of the time of this update according the Environmental Protection Agency’s AirNow monitoring website.

UPDATE 9:30 p.m. — All evacuation warnings have now been lifted, and crews are mopping up, according to the Mendocino County Sheriff’s Office. Current Cal Fire estimates put the Mina Fire at around 170 acres in size, with about 30% perimeter containment. Two outbuildings and several vehicles have been damaged.

Cal Fire will likely provide an updated acreage in the morning after additional mapping. There is also now a Cal Fire incident page for the Mina Fire, which can be found here, but has not been updated since the initial post.

The evacuation warning was previously expanded as the fire “seemed to be moving north into heavier fuels on Perry Ridge,” according the MCSO. However, all evacuation warnings have now been lifted as of 9:30 pm.

UPDATE 8:20 p.m. — MCSO has issued an updated evacuation warning via Nixle, which went out shortly before 8 p.m.:

Here’s a photograph shared by Cal Fire where you can see the retardant lines around the fire:

UPDATE 7:15 p.m. — The Mina Fire is still holding at 50 acres. Crews have mitigated most of the threat to structures, according to scanner reports, and are working at creating a line on the northern part of the fire, which is also the uphill side.

UPDATE 6:50 p.m. — MCSO has issued the evacuation warning via Nixle, which you can read here. This is a warning, not an evacuation order, but residents should be prepared to leave if conditions change or if they feel unsafe.

UPDATE 6:35 p.m. — The Mina Fire is currently holding at 50 acres, and is burning several structures, primarily moving from east to west. The fire is described as having returned to the valley floor after a wind shift, and is primarily burning in timber and oak woodlands. As of this update, crews do not anticipate a high potential for needing additional resources tomorrow, according to scanner traffic.

Traffic controls are currently being set up at Mina Road and Hopper Lane to allow crews to continue to respond; a number of other intersections in the vicinity are also blocked off. The Mendocino County Sheriff’s Office has asked people to avoid the area if possible as what was called “a ton of vehicles” on the scanner in the vicinity of the fire are creating additional challenges for fire crews.

UPDATE 6:20 p.m. — The MCSO has issued an evacuation warning for the following areas detailed in this tweet:

UPDATE 6:12 p.m. — According to Cal Fire officials the fire is now 40 with a rapid rate of spread and little to no containment. Cal Fire is saying that some vehicles have burned, and perhaps an RV or trailer, but not yet any structures. The fire is growing rapidly. Officials have urged people to evacuate, but people are refusing to evacuate.

UPDATE 6:02 p.m. — Sheriff Kendall said in a brief phone interview that evacuations of that area are currently encouraged at this point, and may be ordered soon. Aircraft from Humboldt County, Red Bluff, and of course Ukiah have responded to the fire. Tribal Police are urging residents to evacuate but are meeting some resistance. An MCSO lieutenant is on his way to assist.

UPDATE 6 p.m. — A mobile home or trailer is engulfed in flames at Hopper Lane in Covelo as a result of the wildfire and authorities are beginning to urge evacuations in that area.

UPDATE 5:50 p.m. — As of around 5:40 p.m. scanner chatter indicated that the Mina Fire near Covelo had a dangerous rate of spread, but was still being estimated at 20 acres. The fire is northwest of Covelo near the northern edge of the valley floor. Many aircraft have responded, not just from Ukiah, but from Cal Fire stations north and east.

The much smaller fire near Hopland did briefly force the closer of the 175, a couple miles east of Hopland, but it is now open with one-way traffic control. “Forward progress” of the fire was quickly stopped.

ORIGINAL
MENDOCINO Co., 8/10/20 — Fire crews are the on the scene of a substantial wildfire near Covelo, and near Hopland. As of about 5:30 p.m. the fire near Covelo, dubbed the Mina Fire, was estimated to be at around 20 acres and structures are currently threatened.

No evacuations have been ordered yet but may be required if the fire continues to spread. Crews have requested two additional type one air tankers and an additional helicopter for the air response.

Another vegetation fire has begun in the vicinity State Route 175 and Pratt Ranch Road, near Hopland, and crews are responding from Cal Fire’s Mendocino Unit and multiple local departments. There is some spotting across the highway from the fire.