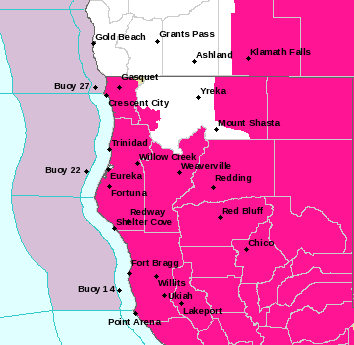 MENDOCINO Co., 8/23/20 — A “red flag” warning has been issued for the entire North Coast, including Mendocino County, as a series of thunderstorms bringing high winds, dry lightning, but very little rain, bear down on Northern California. Meteorologists and firefighters are worried that the dry lightning could bring a new round of fire starts, and that the high winds forecast to come with the storms could spur ferocious fire behavior on the part of existing fires. In some areas gusting winds over 50 mph as possible.

The storms are forecast to begin this afternoon and peak overnight.

In addition to this, warm temperatures are expected, though not as high as during the record breaking heat wave of last week. Ukiah is forecast to hit 101°, Willits 90°, and Laytonville 91°. The coast is forecast to remain cool and with good air quality, though there is a good chance that smoke will drift into the inland portions of Mendocino County. (If the smoke is getting you down considering a homemade air purifier)

Already the LNU Lightning Complex and the SCU Lightning Complex have grown to be the second and third largest fires in modern California history, respectively. And as of Sunday morning the total acreage burned by the various lightning start fires was around 1.1 million acres or around 1,700 square miles — roughly the area of Sonoma County.

Though at this point the adjectives “historic” and “unprecedented” are becoming repetitive, this weather and these fires really is without historical precedent and represents a significant escalation of the steadily worsening fire situation in California. As this situation develops stay tuned to the Mendocino Voice for the latest on fires and other updates.