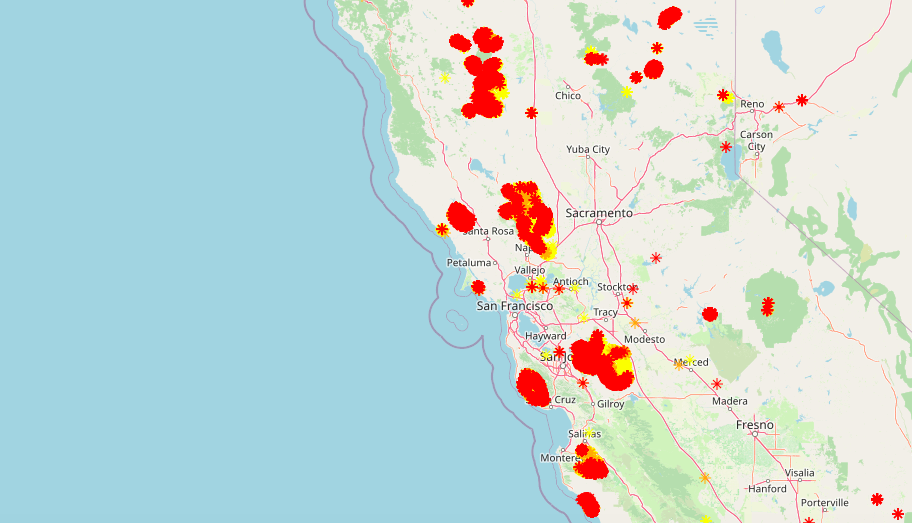 The last time the state witnessed a similar flurry of lightning strikes was 12 years ago, in June 2008, when there were 5,146 strikes in the state, a large number that pales in comparison to this year’s lightning blitz.

According to Cal Fire’s incident page, there have been 5,762 wildfires so far in 2020, meaning that over 6% of all the fires in the state this year resulted from the recent thunderstorms. According to Gov. Newsom’s press conference today, the fires had already consumed 771,000 acres as of Friday morning, and Cal Fire reports indicate at least 660 structures have been burned as of Thursday.

Additionally, according to the National Weather Service San Francisco Bay Area, there may be more thunderstorms this weekend. Moisture from former Hurricane Genevieve will increase potential for thunderstorms across Northern California. A low pressure system off the coast might strengthen these storms. The entire San Francisco Bay Area and Central Coast may be affected. “Lightning will likely spark new fires across the region, including remote areas. Wildfires in remote regions may not become apparent until warmer and drier conditions allow them to grow. Please report potential fires to local CALFIRE or SHERIFF offices,” they wrote on their update.

Climate change is increasing the scope, severity, and frequency of wildfires. Two years ago, assistant chief with the San Mateo County fire department, Jonathan Cox said, “What we’re seeing in California right now is more destructive, larger fires burning at rates that we have historically never seen.” This is a good example of that.

On the surface the cause of the fires is obvious — a combination of intense lighting storms and a record breaking heat wave that contributed to the parched fuel that makes it easier for fires to start and spread quickly.

But underneath, a more complicated question looms. Why is California experiencing these extreme weather conditions that create the perfect breeding grounds for catastrophic events like the one going on right now? Climate scientists say they don’t have the evidence to tie the thunderstorms directly to climate change, but that climate change definitely played a role in the record breaking heat, which, combined with unusual humidity that came up the coast from a tropical storm southwest of Baja, created conditions especially conducive to both stormy weather and wildfire.

Emily Williams, a geographer, PhD candidate, and researcher at UC Santa Barbara’s Climate Hazards Center explained in an interview that a lot of people point to specific events and ask if they’re happening because of climate change. But she said it’s a tricky question to answer.

“Climate change is really fundamentally changing our climate, our atmosphere, the way circulation is happening,” she said. “You can think about it as weirder weather will happen more frequently and it has been happening more frequently. It’s the combination of changes that gives you a specific event,” she said.

There’s no doubt we have experienced some weird weather lately here in California. As you’ve probably noticed, exceptional heat enveloped the state starting at the end of last week. Heat records were broken left and right, with coastal regions reaching the 90s, inland areas experiencing temperatures in the triple digits and Death Valley reaching 130 degrees on Sunday, an all time high for the area and possibly the highest temperature ever reliably recorded on earth.

“Yeah, it’s summer, and summer is hot, but this is different,” the National Weather Service Tweeted on August 18. “These are record high temperatures in what is typically one of the hottest times of the year anyways.”

These are some of the places that matched or broke daily heat records over the past few days:

“This heat wave certainly has been made hotter by climate change. It’s hard to find a heat wave on planet earth that hasn’t been,” said Michael Wehrner, a climate scientist at Lawrence Berkeley National Laboratory. Wehner wrote in a recent Climate Signals post that for most of the state, climate change has increased the temperatures of rare heat waves by three to four degrees Fahrenheit.

Wehner explained that a three or four degree difference may sound like a small amount, but it makes a big difference, because at already high temperatures, just a few degrees can make the potential health impacts of extreme heat more severe. “It sounds like a small amount, and it would be if it was a normal day,” he said. “But it’s not a normal day, it’s a very hot day.”

Last weekend, large swaths of California were under an extreme heat advisory.

“This is definitely historic,” said Emily Williams. “But these records probably won’t last long. Next summer, the summer after, we’re likely to just keep breaking these records,” she said.

According to research from UC Santa Barbara, heat waves are more likely to be exacerbated by climate change in our warmer world. Climate change has increased the odds that heat waves will happen more often, be more extreme, more severe, and break more records.

“People aren’t used to living in these temperatures,” added Wehner. “There is at least the threat of blackouts because of the electrical demand and that will put people’s health at risk. In particular, people who don’t have air conditioning or work outside, people who work in construction or agriculture, are placed at risk during these very hot events.”

Many areas are experiencing consecutive triple digit days, putting people at risk of heat related illness including heat stress, heat stroke and heat exhaustion. And the heat wave is not yet over. Nighttime temperatures are also high, offering little relief from the extreme heat, which also can exacerbate pre-existing medical conditions.

Williams noted that what is especially remarkable about this heat event is not the temperatures themselves, but the scope and duration of the exceptional warmth. Records were broken across California — in the north, south, inland, and coastal areas.

Back in California, the addition of uncommon humidity, for a state known for its hot, dry summers, to the extreme heat continues to create unsafe conditions. “That combination is quite a dangerous cocktail, and can really lead to things like heat stress,” said Williams.

In coastal California, a warmer world may often mean a more humid one as well. Williams explained that when you have a warmer atmosphere, it evaporates more moisture. So, in areas near large bodies of water, such as the Pacific, higher temperatures will increase humidity.

When it’s humid, sweat doesn’t evaporate as quickly as when it’s dry, so the body can’t shed heat and cool itself down as efficiently, which makes the heat that much more dangerous for human health.

“The humidity is not unheard of but it is unusual,” said Williams, who explained that it is due to a combination of a high pressure system sitting over the southwest, and tropical storm Fausto, which settled southwest of Baja before moving further west into the Pacific and dissipating into a tropical depression. The high pressure system helped funnel the moisture from Fausto, over 1,000 miles away from Northern California, up the coast, causing the humid weather. It’s also what brought us the thunderstorms that started Sunday morning and moved through Northern and Central California throughout the next few days.

Thunderstorms happen when there is a combination of moisture and warm air. That’s why we don’t get many in California, because it’s usually dry. But this time around, the moisture from Fausto and the heat wave created conditions conducive to thunderstorms.

The heat wave was less out of the ordinary. Meteorologist Daniel Swain wrote on his Weather West blog last week that “California will be located directly beneath a strengthening ridge axis moving building overhead from the southeast.” Ridges are accompanied by warm and dry weather. Swain continued, “In the meantime, a humid tropical air mass is being advected over the state from the southwest on the western periphery of this ridge, largely thanks to the remnants of former Hurricane Elida. This same basic pattern will essentially remain locked in place for at least the next 7 days, and very possibly longer.”

Scientists are confident that climate change, which has increased the probability of warm days, is behind the scorching weather, but they can’t say if it’s the direct cause of the thunderstorms.

For storms as rare as these recent thunderstorms were, they don’t have the information.

However, there is unquestionable causation between the lightning strikes and the fires.

Burning in and near Mendocino County, are fires in Covelo, Jenner, west of Healdsburg, Vacaville, and Mendocino National Forest. Some of the large complexes burning in other parts of the state are north of Santa Cruz, east of San Jose, and east of Monterey. To see all fire incidents in California, you can go to Cal Fire’s incident page.

As of Wednesday, Lynette Round, a Cal Fire information officer, said there were 8,900 fire personnel from state, local, and federal agencies assisting on the fires throughout the state.   At that point, Cal Fire has requested 375 fire engines from out of state firefighting agencies.

In addition to the fires, there are also rolling blackouts across the state, which started last weekend during the heatwave. PG&E tweeted last week, “Given strain on power grid during excessive heat, PG&E begins rotating power outages at direction of state grid operator- outages expected to affect approximately 200-250K customers in rotations of about one hour each.”

Every day since, there have been some combination of power outages, flex alerts, or calls for energy conservation to sustain the grid.

Round urges people to stay aware of what is going on in their communities and sign up for county alert systems. She also said to be prepared and ready to go in case of an evacuation order, adding that everyone should “have a to-go kit, get all important paperwork and everything that is irreplaceable and put it in their car, that way if they get an evacuation order they can leave at a moment’s notice,” said Round.

2 thoughts on “Are the historic heat, lightning storms and fires caused by climate change? We asked climate scientists”