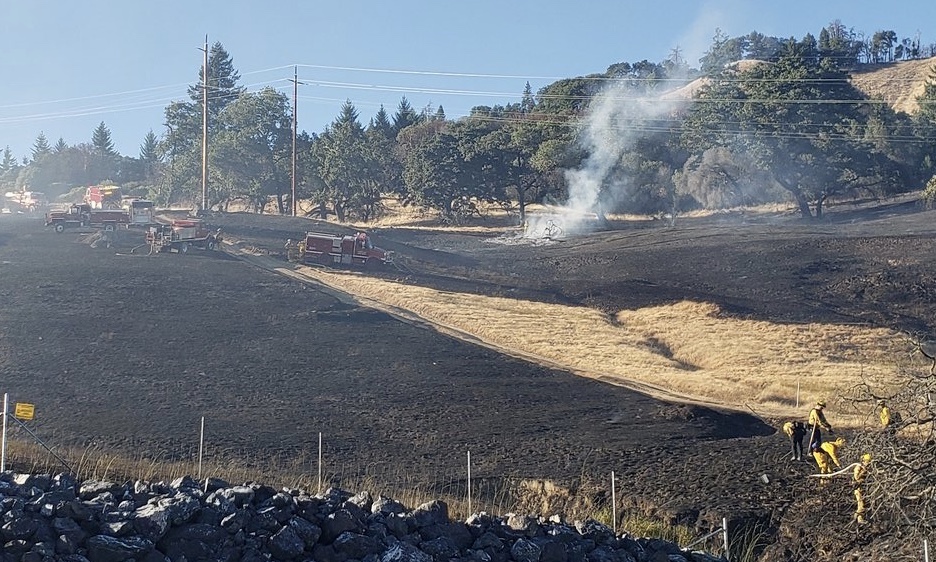 Cal Fire’s Mendocino Unit shared this video on Facebook of the scene — the fire primarily occurred on the east side of the highway, running alongside the road.

UPDATE 6:45 p.m. — Firefighters have made good progress on the fire and it remains steady at 12 acres. Scanner chatter indicates that there is hose all around the “head” of the fire, meaning the portion that was originally growing. Here’s some videos of the blaze from CalTrans and CalFire:

UPDATE 6:10 p.m. — The northbound lanes are now being reopened with police escorts through the fire zone. Cal Fire estimates the fire size at about acres and holding.

UPDATE 6:05 p.m. — The fire has grown to between five and 10 acres with a moderate rate of spread, though it has potential to grow substantially larger.

WILLITS, 8/19/20 — A new fire has broken out along U.S. Route 101 on the Ridgewood Grade called the “Red Fire.” The fire is burning about half way down the grade from the Ridgewood Summit, near where the ongoing road work narrows the highway. Firefighters are responding and aircraft are in the air above the fire. The fire is burning along the east side of the fire, and is about two acres and moving uphill. As it is located on the east side of the highway the northbound lanes are affected.

There is some indication that the 101 will be closed as the fire spreads and firefighters work.