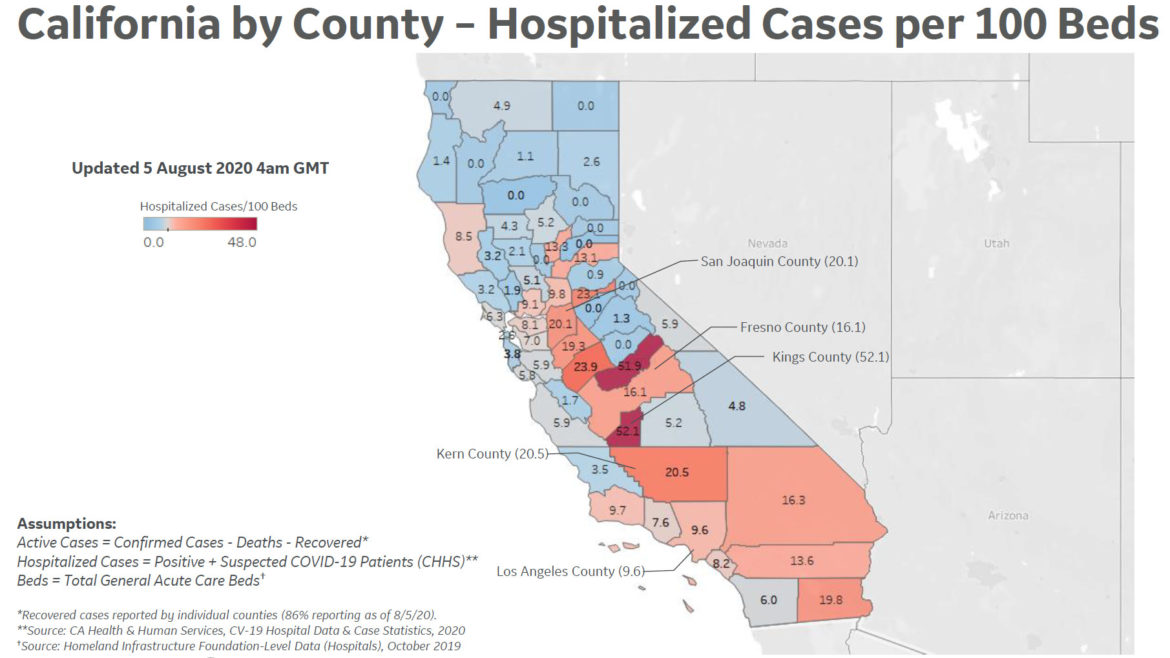 A map showing the percentage of hospital beds occupied by COVID patients in each county as of August 5, 2020.

WILLITS, 8/5/20 — One more person has succumbed to the coronavirus disease (COVID-19) in Mendocino County, bringing the death toll to 10, out of the now 356 total cases, for an observed mortality rate of about 2.8%, or slightly better than the country as a whole. Fifteen more people were confirmed to have COVID today, and the total number of people hospitalize dipped back down to nine from a high of 12 yesterday. So far there have been 23 “COVID positive” patients admitted as inpatients to one of the three hospitals in Mendocino County.

The County of Mendocino confirmed that the additional death was not connected to the outbreak at Sherwood Oaks nursing home, and occurred at an Adventist Health hospital. Adventist Health manages all three hospitals in the county and Jason Wells, president of Adventists in Mendocino, elaborated that the person was elderly and died at Adventist Health Ukiah Valley yesterday, Tuesday.

“This person was not just a number, this is a loved one a family, member and the family is still reeling,” said Wells, adding “Our thoughts and prayers go out to the family.”

In a brief phone interview Wells provided some insight into the medical fight against the disease. He noted that as of yet no patient in a local hospital has had to be placed on a ventilator. In the popular imagination, the ventilator has been firmly associated with this pandemic, as has a general understanding of it as a respiratory disease that primarily attacks the lungs. But Wells echoed the findings of doctors and scientists across the world who have noted the varied ways in which this small virus attacks the human body, often causing sudden and catastrophic blood clots, or organ failure beyond the lungs.

Wells stressed the importance of treatment in handling the disease, saying that California and Mendocino doctors have had the benefit of learning from the tragic situation in New York, developing new techniques in fighting the virus. He noted that by flattening the curve in California, there was time to prepare for the disease.

It bears repeating that that the outcomes with this disease, in people who are made gravely ill, are highly dependent on the level of treatment and care they receive. Public health officials the world over have stressed that by keeping the curve, that is the rate of new infections “flat,” hospitals will not be overwhelmed and doctors will be able to bring their considerable tools and knowledge to bear to each case, rather than having to triage and ration treatment.

Mendocino Cost Adventist Health in Fort Bragg has taken all the nine COVID positive patients from Sherwood Oaks. Though there is some lag in statistics sometimes, given that there are a total of nine people hospitalized currently, it would appear that they are currently all from the Sherwood Oaks outbreak.