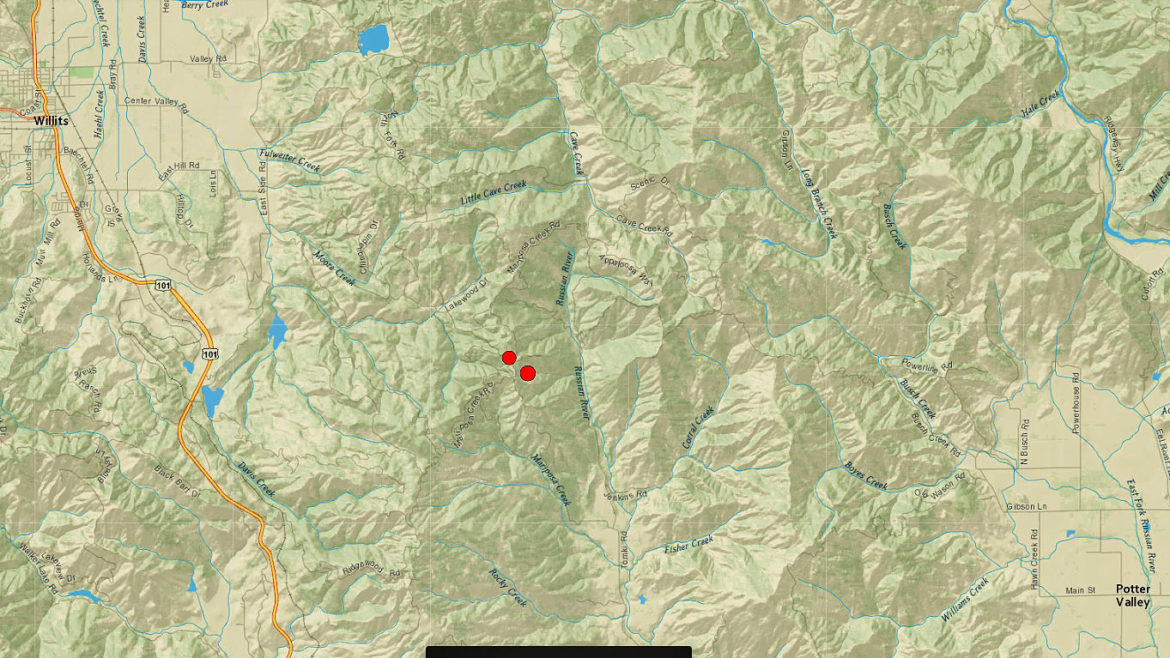 UPDATE 7:02 p.m. — Still another noticeable earthquake shook the area, seconds before 7:00 p.m. That quake measured 4.0 in magnitude according to the USGS. This quake had its epicenter northeast near the same cluster, around Tomki Rd. and downhill from the Pine Mountain neighborhood. It was followed about a minute later by a 2.8 quake, marking five total quakes above 2.5 in magnitude to have struck this tiny canyon area between Potter Valley and Willits since just before 6 p.m.

UPDATE 6:46 p.m. — Yet another moderate sized quake has shaken central Mendocino County, this one at about 6:44 p.m. This aftershock measured a magnitude 3.6 according to the USGS.

ORIGINAL
WILLITS, 8/18/20 — Two earthquakes rattled central Mendocino County this afternoon with the larger of the two measuring a magnitude 4.0 and hitting Mendocino County at about 5:55 p.m. today, according to the United States Geological Survey (USGS). The quake struck in the Pine Mountain neighborhood, about a half mile west and uphill from Tomki Rd., about equidistant between Potter Valley and Willits, and was felt as a strong shaking in Willits, lasting about two seconds. Its epicenter was about 4.7 miles below the surface of the Earth.

The smaller quake occurred a little earlier at 5:46, and measured 3.1 in magnitude, with its epicenter just a few hundred yards northwest of the larger one.

So far there have been many reports of rattled windows and shaken nerves, but no substantial damage.