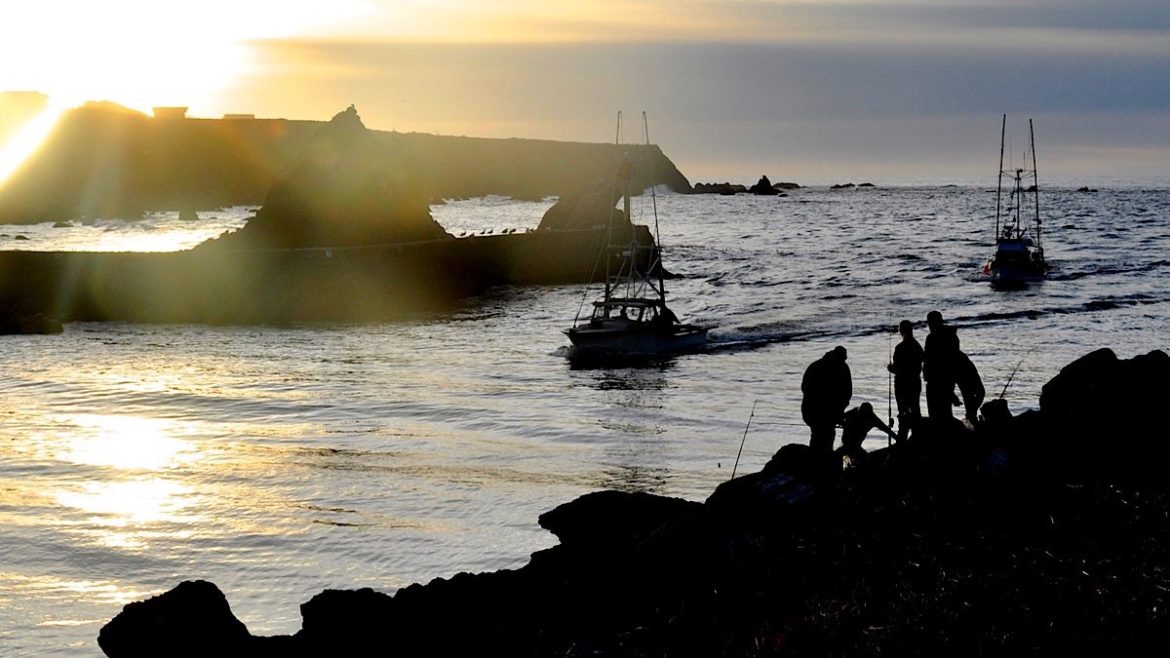 The mouth of the Noyo River in Fort Bragg. (Frank Hartzell)

FORT BRAGG, 8/31/20 — Facing the lowest Noyo River water flows ever recorded, the Fort Bragg City Council voted unanimously to declare a “stage 2” water emergency at a special meeting held by Zoom webinar Monday night. Residents of Fort Bragg are asked to reduce water use by 20 percent and refrain from watering outdoor landscaping, among other measures.

Three weeks ago, the city moved to a Stage 1 water advisory, asking residents to reduce usage by 10 percent — that wasn’t enough.

Although the city has increased its water storage greatly since the drought of 2015, river flows are now lower than even the driest years of the past. When river flows become too low, the water can become brackish and too salty to use, especially when very high tides come, which will happen in mid-September.

“Currently the Noyo River is flowing at 0.90 cubic feet per second (cfs). This flow level has dropped below the 2015 low flows and has surpassed 1977 flows,” the staff report presented to the council stated.

“Staff has not experienced flows as low as these. With this in mind, we expect flows to continue to decrease through September and into October. Our average water demand is 838,000 gallons per day. Currently, sources are providing 758,000 gallons per day,” the staff report states.

“This is a difference of 88,000 gallons per day. The numbers don’t lie. There are no two ways around this. We have to respond,” said Councilmember Lindy Peters.

Public Works Director John Smith, who brought the matter to the council, said the amount of shortfall depended on the tides and the variability of the river flows the city relies on.

“That was a snapshot,” said Smith. He said the city never expected to go below 1977 levels and that dropping water levels have come as a shock.

In 2015 the City’s water supply system could only store small amounts of water that provided enough to maintain proper water system pressure and to provide a safety margin for fire-fighting flows. Five years later, the City has added two major sources of water storage, including an additional 1.5 million gallon water storage tank and the Summers Lane Reservoir, with a raw water capacity of 14.7 million gallons. This brings the city’s total water storage capacity to 22.6 million gallons, more than triple what existed in 2015. Still, the alarming drop in river flows had the council discussing the idea of a desalination plant as a solution.

“Eventually that is going to be our water source,” said Peters, who has long championed the idea. “If we can get ahead of it, it would be a good thing,” Peters said.

“It would be really interesting and important to know where that tipping point is, how much demand do we need to truly justify moving  forward with a desalination plant?  Do you have a sense of that already?” Councilmember Jessica Morsell-Haye asked Smith.

Smith said he did not have an exact number, saying it would be nice to have the customer who suggests the plant come up with the number.

“Are you confident that stage 2 is going to suffice? The chart is a little scary,” Morsell-Haye asked.

“I am confident that if we can actually save 20 percent — yes — I’m very confident,” responded Smith.

Hotels and motels must ask guests not to request new sheets and towels every day. Restaurants must serve water only when it’s asked for under stage 2. Stage 3 would require a 30 percent reduction and has stronger enforcement, according to the discussion. Jacob Patterson provided a comment pointing out the role of climate change and rising sea levels in the future poses a serious threat into the future.

There was some discussion about enforcement, with Smith saying there were different levels of enforcement with Stage 2 including major and minor offenses.

“We are not looking at everybody’s bill and hammering somebody for not reducing by 20 percent,” explained Vice-Mayor Bernie Norvell.

“The fines and penalties come in when you violate conditions of stage 2 like defective equipment or watering lawns with overflow. That is where we are going to penalize somebody,” said Norvell.

Smith said he was aware that not watering landscaping is a challenge, as many people have invested much effort in gardens during the long summer of shelter in place.

“They are going to have to be creative and use their bathtub water, (as an example) and take it out to water the garden,” Smith said.

The City is counting on residents to pull together to conserve, as happened in 2015.

“While we’ve made major water storage improvements, we are now in uncharted territory. It is anticipated that the most challenging period for meeting water demand will extend from now through mid-October. Once again, the Fort Bragg community is being asked to come together and see us through a difficult period of limited water availability,” the staff report stated.

10 thoughts on “Fort Bragg declares “stage 2” water emergency; residents must cut use by 20%”