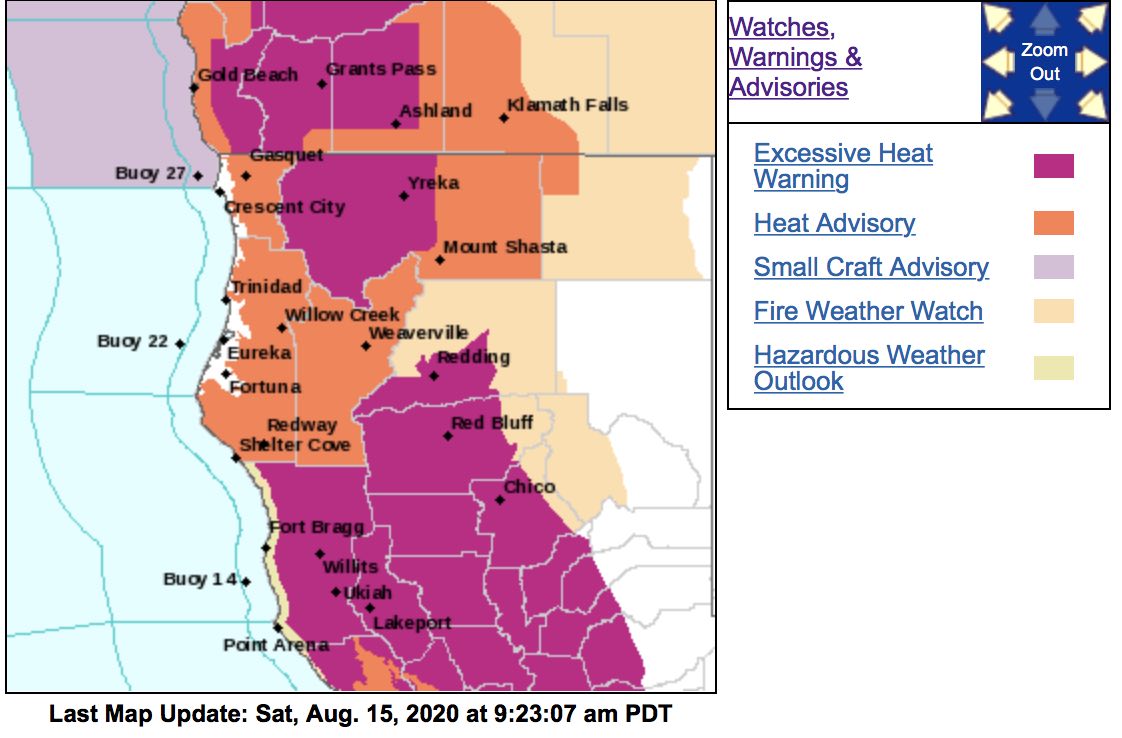 MENDOCINO Co., 8/15/20 — The National Weather Service has now issued a “fire weather watch” for portions of the interior north coast from 11 p.m. on Saturday, August 15 until 11 p.m. on Sunday, August 16. There is a potential for thunderstorms developing during across the state, reaching Northern California later today and Sunday, which combined with high temperatures and low humidity mean an increased risk of wildfires, especially with lightning strikes. An excessive heat warning also remains in effect for much of interior Mendocino County and Lake County until 7 p.m. today.

The NWS issued an elevated fire risk warning earlier this week for Saturday, but has now expanded that predicting an increased likelihood of thunderstorms and fire weather risk in Mendocino County through Sunday evening. The thunderstorms are forecasted primarily in the northeastern Mendocino County, with the highest risk in the Yolla Bolly Wilderness during the afternoons and evenings. The fast moving nature of the storms, combined with low precipitation, dry vegetation, low humidity, and high temperatures increases the risks of wildfire. If you are outside and see lightning, seek shelter immediately.

There are currently no planned power shut-offs due to increased fire risk in Mendocino County, according to PG&E’s weather forecasting website. Cal Fire, which issues red flag warnings for fire weather, has only issued a warning for the northeastern corner of the state.

The ongoing heat wave is expected to continue with temperatures remaining above 100 in inland valleys through at least Thursday. On Friday, the historic heat wave led to a Stage 3 emergency and rolling blackouts across portions of California’s electric grid, including parts of the North Bay. However, the Stage 3 emergency was downgraded around 10 p.m.

Scroll down for the original article and updates.

UPDATE 7:40 p.m. — The historic heatwave has resulted in the declaration of a Stage 3 Emergency by Cal ISO, the organization that controls California’s power grid. Such a designation has not happened since the rolling blackouts of ’00–’01. Now rolling blackouts are already hitting the North Bay, with areas around Santa Rosa and in Marin County losing power. Reader reports also indicate that Gualala in southwestern Mendocino Co. has lost power — Gualala is tied to the Sonoma grid more closely than to Mendo and is more susceptible to power issues there.

Here is the decleration from Cal ISO:

The California Independent System Operator (ISO) is declaring a Stage 3 Electrical Emergency due to high heat and increased electricity demand. The emergency initiates rotating outages throughout the state.
A Stage 3 Emergency is declared when demand outpaces available supply. Rotating power interruptions have been initiated to maintain stability of the electric grid.
The Stage 3 Emergency declaration was called after extreme heat drove up electricity demand across California, causing the ISO to dip into its operating reserves for supply to cover demand.
The California ISO is working closely with California utilities and neighboring power systems to manage strain on the grid and to restore the power grid to full capacity. As portions of the grid are restored, local utilities will restore power in a coordinated fashion.
Although a Stage Emergency is a significant inconvenience to those affected by rotating power interruptions, it is preferable to manage an emergency with controlled measures rather than let it cause widespread and more prolonged disruption.

UPDATE 8/14/20 — The California Independent System Operator, which manages the state power grid, declared a stage 2 emergency this afternoon as excessive heat drives up energy use statewide, and stating that “if system conditions do not improve,” the ISO will need to move to a stage 3 emergency, which could resulting in rotating power outages.PG&E has requested conserve power by unplugging appliances not in use or reducing energy use overall until 10 p.m. this evening.

There is a now a potential for isolated thunderstorms, particularly in and evenings “over portions of Trinity, northeastern Mendocino, eastern Del Norte, and extreme northeast Humboldt counties” beginning Saturday and lasting through Monday, according to the most recent forecast from the National Weather Service.

“The highest threat will exist over the Trinity Alps and Yolla Bolly Mountains late in the afternoon hours. Dangerous lightning, gusty winds, hail to a half inch in diameter, and brief heavy rainfall will be possible with these storms,” according to a post from the NWS. If you are working outdoors and see lightning, you should take shelter.

The current heat wave is forecasted to last between six and ten days with above average temperatures and increased fire risks due to low humidity. The Mendocino Voice spoke with climatologist Daniel Swain about the current fire risks here in Mendocino County in a recent article, and you can read his insights about this heat wave on his Weather West website.

MENDOCINO Co.., 8/13/20 — Temperatures are predicted to reach over 100 degrees in many of the North Coast’s interior valleys through the weekend, and the forecast also includes low humidity, gusty winds, and potential thunderstorms in the mountains of northeastern Mendocino County, raising the risk of wildfires, and for people suffering from heat illness.

The National Weather Service (NWS) in Eureka has issued an excessive heat warning for the majority of interior Mendocino County and Lake County from noon on Friday, through Saturday at 7 p.m, for temperatures that could reach between 100 and 110 degrees. The heat wave is expected to continue into next week for up to ten days, and may be the hottest in over a decade.

However, hot weather also means an increased burden on the electric grid, in part due to increased air conditioner use. PG&E is requesting all customers reduced electricity use as much as possible tomorrow, Friday August 14, between 3 p.m. and 10 p.m. and in response to a statewide “flex alert” to manage potential burdens on the power grid, which could lead to blackouts (full details below).

There are currently no planned power shut-offs due to increased fire risk in Mendocino County, according to PG&E’s weather forecasting website. Cal Fire, which issues red flag warnings for fire weather, has only issued a warning for the northeastern corner of the state.

The excessive heat warning for Mendocino and Lake counties lasts from noon on Friday, August 14 through 7 p.m. on Saturday evening, August 15. Sunday may be slightly cooler, above average heat is predicted into mid or late next week. There is also a slight potential for thunderstorms in the mountains of northeastern Mendocino on Saturday afternoon through evening. Full NWS forecasts for specific areas are on the weather.gov website.

Heat waves of this severity tend to only occur a few times a year on the North Coast, and so it’s recommended to take extra precautions to avoid heat illness, which can require emergency attention. The NWS recommends the following during an excessive heat warning; more tips on heat illness can be found here:

Drink plenty of fluids, stay in an air-conditioned room, stay out of the sun, and check up on relatives and neighbors. Young children and pets should never be left unattended in vehicles under any circumstances. Take extra precautions if you work or spend time outside. When possible reschedule strenuous activities to early morning or evening.

Know the signs and symptoms of heat exhaustion and heat stroke. Wear lightweight and loose fitting clothing when possible. To reduce risk during outdoor work, the Occupational Safety and Health Administration recommends scheduling frequent rest breaks in shaded or air conditioned environments. Anyone overcome by heat should be moved to a cool and shaded location. Heat stroke is an emergency! Call 9 1 1.

Here’s the announcement from PG&E regarding the “Flex Alert” called for Friday, including tips on energy conservation:

A Flex Alert is an urgent call to immediately conserve electricity and shift power demand to off-peak hours to ease strain on the grid. The ISO issued the alert in response to forecasted high temperatures and a predicted increase in electric demand, primarily from residential air conditioning use.

Above-normal temperatures for California are expected to last through the weekend and into late next week. Prolonged heat over several consecutive days is expected to drive electricity demand higher, as nighttime temperatures are also forecast to be above average.

PG&E encourages customers to reduce electricity use during the Flex Alert on Friday, especially during the afternoon and evening, when air conditioners are typically at peak use. Customers should also follow these conservation tips:

Adjust your thermostat to 78 degrees or higher if health permits or turn it off if you will be away from home. Use a fan instead of air conditioning, when possible.

Unplug phone charges, power strips (those without a switch) and other equipment when not in use. Taken together, these small items can use as much power as your refrigerator. Avoid using electrical appliances and devices. Put off tasks such as vacuuming, laundry, dish washing and computer time until after 10 p.m.

Set your pool pump to run overnight instead of during the day.