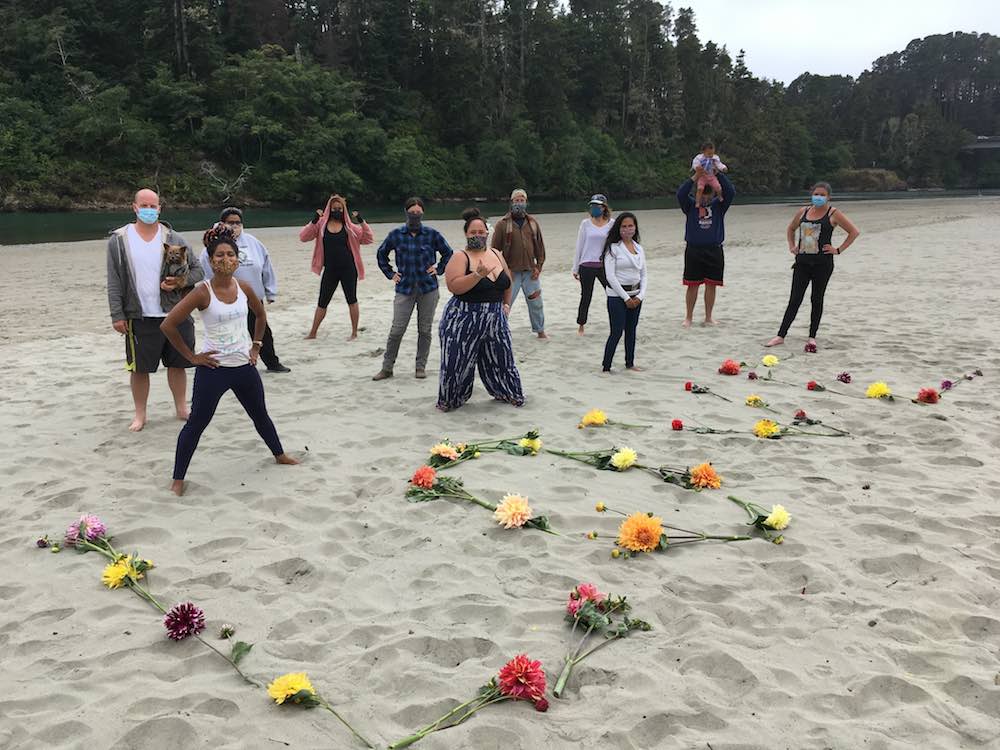 MENDOCINO Co., 6/21/20 — Colorful blankets were spread out along the peaceful Big River Beach today for Mendo Coast Black, Indigenous and Other People of Color’s  (BIPOC) first Juneteenth festivities. Music, celebration, registering voters, face masks, hand-sanitizing, and social-distancing were the order of the day. A ceremony of laying down flowers on the smooth white sand to spell out the word “Love” highlighted the event’s theme.

Sierra Wooten, spokesperson for Mendo Coast BIPOC said, “Left out of our nation’s school history books, Juneteenth has been long celebrated as the freeing of Africans brought to our shores and held in slavery. In light of everything going on, we wanted to take time to celebrate Juneteenth as the end of slavery. Even though slavery had ended, many slaves were not informed by their masters sometimes for up to two years after President Abraham Lincoln’s Emancipation Proclamation.”

It was during the third year of this country’s brutal Civil War that President Lincoln, on January 1, 1863, issued the Emancipation Proclamation, declaring, “that all persons held as slaves” within the rebel states “are, and henceforward shall be free.” In 1865, the US Congress passed the 13th Amendment, and the elimination of slavery became the law of the land.

The origin of the Juneteenth Celebration dates back to after April 9, 1865, when General Robert E. Lee surrendered his Confederate troops to the Union’s Ulysses S. Grant at Appomattox Court House in Virginia. According to JUNETEENTH.com, “On June 19, 1865 Union soldiers, led by Major General Gordon Granger, landed at Galveston, Texas with news that the war had ended and that the enslaved were now free. The celebration coined as ‘Juneteenth’ started out as a time for reassuring each other, for praying and for gathering remaining family members.”

Wooten added, “Even though Juneteenth ended slavery, we are still not free, but we are here to celebrate the freedoms we do have. Today is about good vibes, about love and even though we are carrying a lot of pain, we are trying to stay positive. We have not all been brought up with the custom of Juneteenth, and we are starting now.  Many families are breaking up over racism. We are celebrating that we have great allies who want to do the right thing.”

Mendo Coast BIPOC has launched its own petition asking the City Council of Fort Bragg to “Immediately form a task force to select a just and inclusive new name for Fort Bragg.”

“This is a process,” said Wooten. “I am personally concerned about what our Native Indigenous residents feel about this. I am sad about people who grew up here who are attached to the name. I know that is hard. The Native people here have been exploited for too long. This is a process we can all be part of.”

Ryan Bushnell started an opposing petition in Fort Bragg that states, “The Fort Bragg City Council should not make any decisions to force the community of Fort Bragg to vote on this issue. If those who are calling for a name change want to vote on it, it is up to them to follow the process and place it on the ballot.” On June 22, the Fort Bragg City Council will discuss placing a November ballot measure to change the town’s name. (See related story by Frank Hartzell.)

Mendo Coast BIPOC is also calling for the Fort Bragg City Council to ban hate symbols within the city and to declare Juneteenth as an annual Day of Observance.