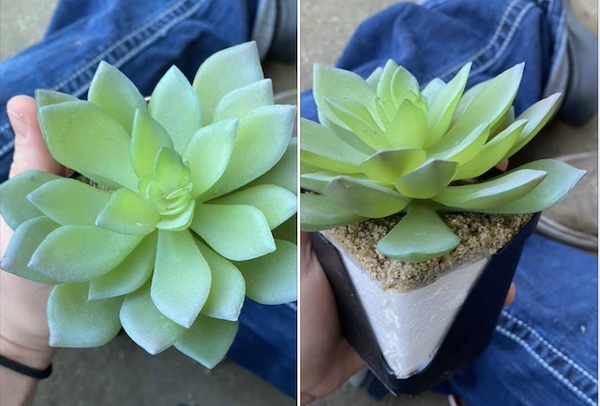 MENDOCINO Co., 3/4/20 — March 3 was a particularly busy news day in Mendocino County, with an earthquake swarm, the primary elections, and more, but it was also a busy day for Willits woman Caelie Wilkes, whose Facebook post about watering her plastic plant went internationally viral.

Wilkes posted her story to Facebook on Friday, explaining how upon going to transplant a beloved succulent, she discovered that she’d been watering — not a true cactus, but a plastic plant for whole two years. By Tuesday evening, the story had made international news, and had been featured on Good Morning America, The Late Show, and the BBC — and Home Depot had sent her some real plants, the kind that need water.

This isn’t the first time Willits has gone viral, a photo of man pumping gas into his Subaru, which had been demolished by a fallen tree made the rounds last year. But that meme didn’t make it into news articles around the world.

What separates mere notoriety from true virality is elusive — it may have been Wilkes detailed paeans of her love for her plant, including her defensiveness about her watering regimen, followed by the realization that, “I feel like these last two years have been a lie.” Or it may be her status as an everywoman, since all us have been tricked at least once by a deceptively beautiful fake plant.

Whatever the elusive “it” factor that landed this Willits indoor garden in the New York Daily News, Chicago’s WGN, and other websites, she may be Willits’ most notable celebrity — at least this week.

We reached out to Wilkes this afternoon to ask what it was like to go viral, and how it had all worked out. After her story got national attention, she explained that Home Depot in Ukiah had sent her an array of real potted succulents as a gift. Here’s what she said:

It just honestly happened so fast I posted it. And with in the first day it had like 20 shares and after that I just watched the number go up before my eyes. I has been crazy. I’m almost overwhelmed. So much positive along with the negativity. But over all I’m enjoying the fact that I’m helping people laugh and smile all around the world. It’s an honest mistake the people can relate to. I think that’s why it went so viral. And yes Home Depot sent me 5 beautiful vases full of not only succulents but a variety of plants. I got home to a beautiful surprise.

Here’s Wilkes’ original post, and here’s a smattering of the news stories she was featured in, including a clip from The Colbert Show:

Clip from The Colbert Show, starts at minute 3:30:

Update from the Home Depot in Ukiah: