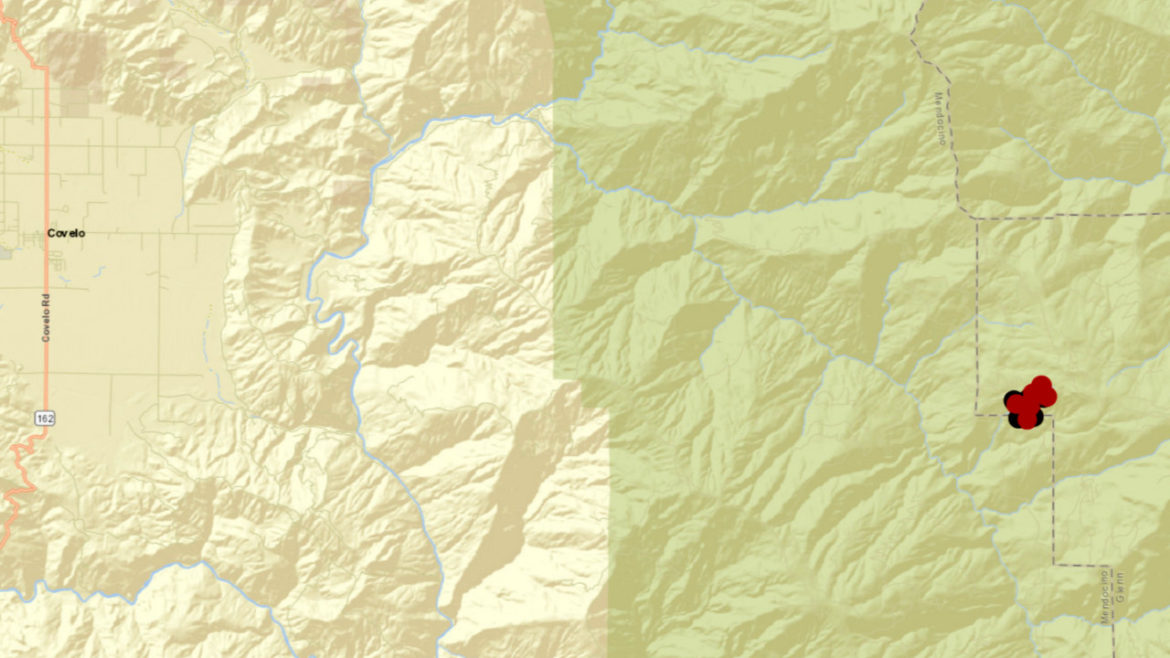 A map showing satellite detected hot-spots corresponding to the baseball fire, in relation to Covelo.

UKIAH, 2/26/20 — Firefighters from the United States Forest Service and Cal Fire, have made quick progress against the Baseball Fire, which quickly spread to 60 acres in the Mendocino National Forest, yesterday, after flaring up from a weeks old prescribed burn pile. There is no immediate danger to any structures or people.

As of this morning the fire stood at 68 acres, with 40% containment, showing little growth overnight, and was smoldering about 15 miles east-southeast of Covelo, just south of Forest Road 7, otherwise known as Mendocino Pass Road. The image above shows the location of the fire in relation to Covelo. The red dots represent hot-spots as detected by satellites. For more information like this check out the Fire Map website, from the University of California San Diego. The satellite data shows the fire apparently straddling the Mendocino-Glenn county line.

The wildfire was flared up around midday yesterday, apparently from some still hot embers from a slash pile that had been burned during a prescribed fuel reduction project back in January. This surprising development comes at the tail end of what is on track to be the driest February in recorded Northern California history, which has been accompanied by unseasonably warm temperatures. Yesterday when the fire broke out, temperatures in that area were recorded at around 70 degrees — the fire is burning at between 5000 ft and 6000 ft in elevation.

Here is the press release from the United States Forest Service:

WILLOWS, Calif., Feb. 26, 2020 — Fire crews have increased containment to 40 percent on the Baseball Fire on the Covelo Ranger District of the Mendocino National Forest. The wildfire is estimated at 68 acres and is located approximately 15 miles southeast of Covelo near Atchison campground. It has been determined that the fire started from previous pile burning on the Baseball prescribed fire project.

The fire is burning in grass, brush and timber. There are no immediate threats to property or structures.

About 75 personnel are working on the incident and resources include crews, engines, a water tender and a helicopter. Wednesday’s forecast shows the warm, dry weather continuing with a light wind around 5 mph and temperatures in the high-60s.

Information is available on InciWeb at https://inciweb.nwcg.gov/incident/6679/.

Here is our original reporting from yesterday:

On another note, as we appear to be entering an incredibly early fire season, we’ve also begun running a column from the Mendocino County Fire Safe Council — check that out below: