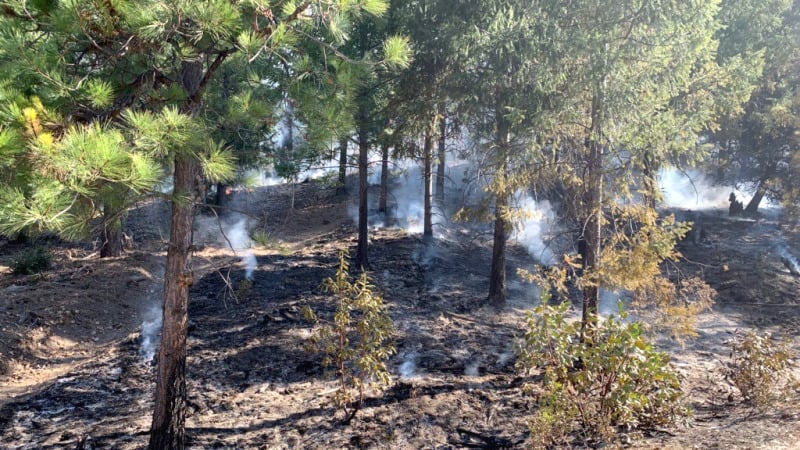 MENDOCINO Co., 2/27/20 — The Baseball Fire, located east-southeast of Covelo within the Mendocino National Forest, has not grown significantly since yesterday, though containment remains the same. Around 100 personnel are currently assigned to the fire, which straddles the Mendocino and Glenn county-line, including crews from a number of nearby National Forests, including Oregon. The blaze initially flared up on Tuesday evening in the location of a prescribed pile burn, resulting in cloud of smoke visible from Covelo, Laytonville, and Willits.

We’ll continue to update with information about the Baseball Fire as it becomes available from the United States Forest Service, which is leading the effort to control the wildfire. The morning press release can be read below; here’s our previous coverage of the Baseball Fire.

WILLOWS, Calif., Feb. 27, 2020 — The Baseball Fire on the Covelo Ranger District of the Mendocino National Forest remains at 68 acres and 40 percent contained. The fire is about 15 miles southeast of Covelo in Glenn and Mendocino counties.

About 100 personnel are working to complete containment of the fire. Assisting on the incident are engines and crews from the Mendocino, Klamath and Six Rivers national forests and from Oregon.

It has been determined that the Baseball fire started from previous pile burning on the Baseball prescribed fire project. The fire is burning in grass, brush and timber in steep, rugged terrain. The fire is spreading at a low to moderate rate in a mosaic pattern, similar to the desired effects from a prescribed fire. There are no immediate threats to property or structures.

Thursday’s forecast shows warm, dry weather continuing with a light wind around 5 mph and temperatures in the mid-60s.
Information is available on InciWeb at https://inciweb.nwcg.gov/incident/6679/.

Here’s is our article from yesterday: