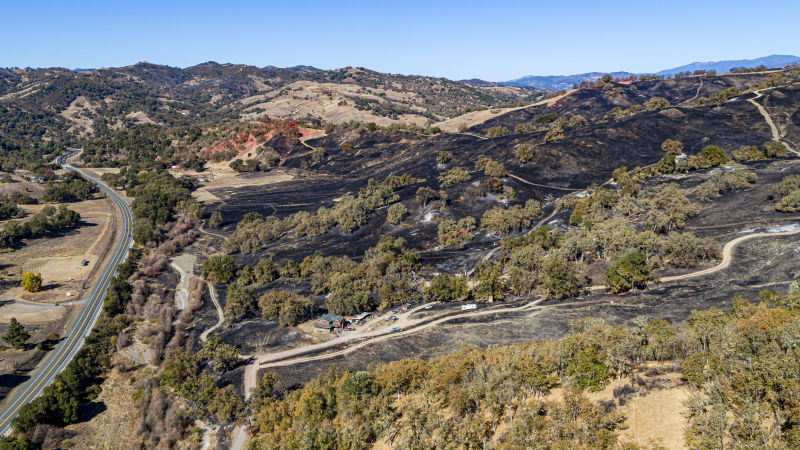 A photo of the Burris Fire which burned near Potter Valley beginning Oct. 27, 2019 -- by Vernon Budinger of Angeles Photography

MENDOCINO Co., 11/03/19 — The Burris Fire, which began at the Cold Creek Compost facility in the early hours of October 27, was 100% contained today. The fire initially smolder in the early morning hours, but flared up and grew rapidly that afternoon, ultimately reaching just over 702 acres in size, and resulting in the temporary closure of State Route 20 from Mendocino County to Lake County. The fire also spurred the evacuation of both Mendocino and Lake County residents from areas along the 20, many of whom had faced evacuation from repeated nearby blazes such as the Ranch Fire.

The Burris Fire began less than 24 hours after PG&E shut off Mendocino County’s power was fully shut off due to fire risk weather on Saturday, October 27, and now has been fully contained, although it did briefly flare up at several points, and at one juncture there were over 1,000 firefighters battling the blaze, including teams from Oregon. An official report on the fire’s cause has not been released, but authorities confirmed that it began at the commercial compost facility, where materials can reach high temperatures during the composting process.

The fire did initially result in both an evacuation order, with the county setting up an evacuation center and a large animal shelter, and the Sheriff’s Office ultimately issued several evacuation warnings that eventually grew to include all of Potter Valley and the east side of Ukiah before being lifted.

And here are some cool photos from a drone taken by photographer Vernon Budinger:

One thought on “Burris Fire, near Potter Valley, 100% contained”