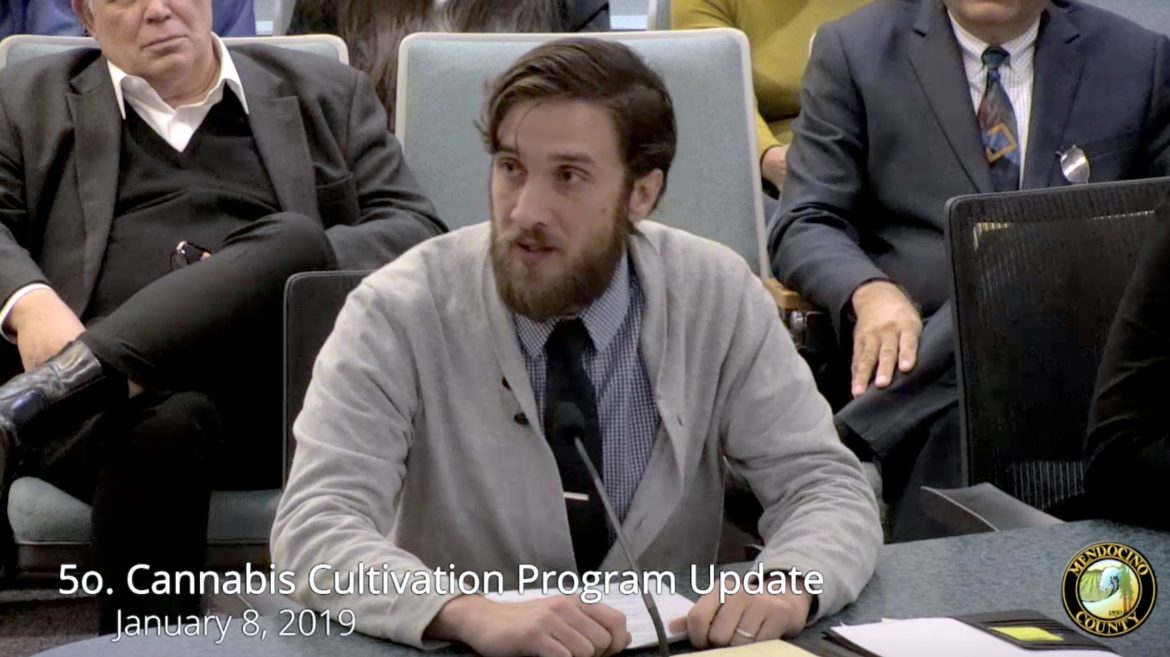 Sean Connell at the Mendocino Board of Supervisors meeting.

MENDOCINO Co., 10/6/19 — Mendocino County’s cannabis program manager, Sean Connell, who began the job at the start of 2019, resigned on Thursday. His resignation comes after approximately nine months on the job, and one day before the close of Mendocino’s “Phase One” of cannabis cultivation applications. It is apparently the case that Connell gave two weeks notice and will remain on till then.

Connell, who was previously employed in the county’s planning and building department, is a Lake County resident and military veteran. In response to a request for comment on his resignation made via Instagram account on Sunday afternoon, Connell first demurred, then said, “It’s not a refusal. I care deeply about the success of the cannabis program. However I had a conflict in leadership opinion [sic]. I wish the Director [sic] and the County all the best in the future.”

He also stated that, “I wasn’t expecting it to be out in the public already.” In a previous interview request made at the time of his being hired, he stated that he would need the CEO’s approval prior to making public statements — though it is by no means clear that this is county policy, and county personnel routinely make comments to the press.

Connell was the second person hired since the county government declared the need for the position in July, 2017; Kelly Overton previously held the job for less than four months, starting in February 2018, before taking off for a walk in the desert in June, 2018, after failing to appear for a significant board presentation.

The position then remained unfilled for the duration of 2018, until Connell was promoted from his position at Mendocino County’s planning and building department.

Asked about the timeline for hiring a new program manager, in a brief interview this weekend, Supervisor John McCowen said that, “Under public hiring practices it seems like it always takes a couple of months.” He added that he is not entirely sure that the position would need to continue to exist, “I would be very open to recommendations from the department on that…Taking one more high salary out of the permitting process would result in being able to lower the permit fees also, as long as we’re not losing efficiency. Again I think those are all things that the department has an opportunity to look at right now.”

During Connell’s tenure, a number of changes occurred involving the county’s cannabis cultivation program unit, including a shift from being housed within the ag department, to being relocated to the Planning and Building Department. A number of personnel changes have also occurred, including at the agricultural commissioner’s position, a job which has seen significant turnover since new statewide commercial cannabis regulations went into effect in 2016.

In further comments McCowen said, “It’s always a concern when you lose key people, but I believe since we’ve unified cannabis under the Planning and Building Department the program is a lot more stable and functional. I think we have a good team in place and I expect that to continue.” Speaking on the subject of the program more generally, he added, “I think there’s definite room to further streamline…some of the issues that people are concerned about and the Board is concerned about requires state legislation.”

Reached for comment Supervisor Ted Williams said, “We thank Sean for his hard work and wish him the best in his next endeavors.”