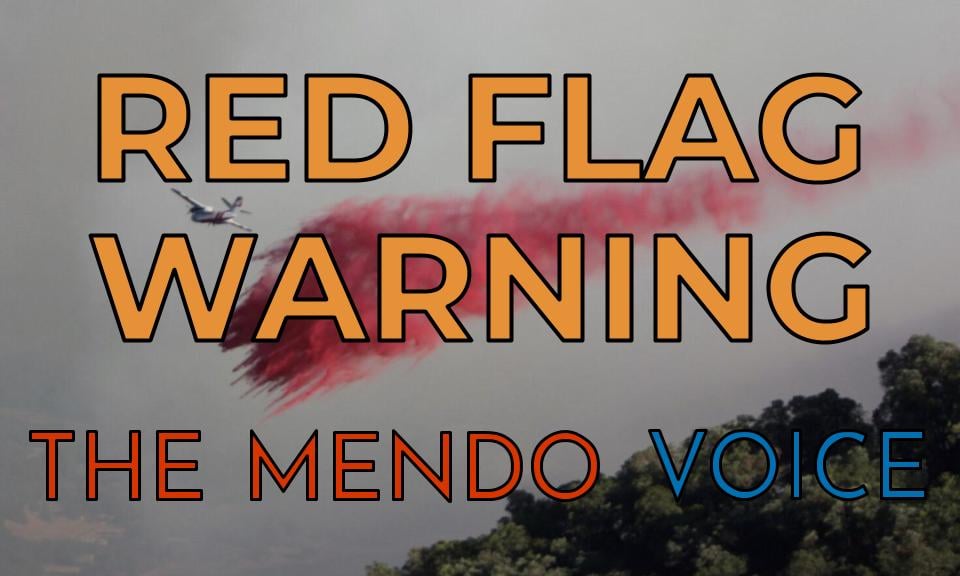 UPDATE, 3:25 p.m — PG&E has announced that while they will be turning of power to 21,000 customers in the Sierra Foothills region at 5 p.m., the are planning no outages in Mendocino, Lake and Sonoma counties.

UPDATE 9/23/19 — Pacific Gas & Electric has extended the area where there is potential for a preemptive power shut-off to large sections of Sonoma and Lake counties. (See the full map here) (To read more about the original red flag warning scroll down to the original article)

However, weather conditions could change and the warning area could expand once again. The National Weather Service (NWS), has stated that currently 3.8 million people are under the red flag warning.

It’s also not entirely clear that the there won’t be spill over from these more localized shut offs. PG&E has stated in the past that they may need shut off long-distance transmission lines that pass through affected areas, thus expanding the power shut-off area. Much of Mendocino County’s electricity comes to us via high powered transmission lines passing through Lake and Sonoma counties.

The City of Ukiah has a discussion on this and how to prepare for a shut-off at their dedicated website here.

Here is a little more detail on the specific danger areas and why, in Mendocino County, from the NWS Eureka office:

And here’s a wind forecast:

NORTHERN CALIFORNIA, 9/22/19 — A “red flag warning” has been issued, to begin Monday evening, for large portions of Mendocino County, especially the inland valleys and the hills surrounding them, by the National Weather Service (NWS). From Monday evening through Wednesday morning, high temperatures, and fast winds with low humidity, are predicted — such conditions are described as “critical fire weather.” Under these conditions it will be much easier for a fire to catch and to quickly grow into a large conflagration. (Check out this website for more details on red flag warnings)

Earlier a fire weather watch had been issued for much of the Northern California, which we reported on in this article. It was unclear if said watch had included Mendocino County, but now the watch has been upgraded to a formal red flag warning, and much of Mendocino County is include in the area at risk.

The maps put out by the National Weather Service, and the one issued by Cal Fire appear to be slightly different, with Cal Fire’s showing a larger portion of the county in danger and the NWS’s showing kind of a speckling of risk across the county. It’s like that the NWS map is more closely following pre-determined fire risk maps, and in some places that map does not include irrigated farmland in the risk area, while the Cal Fire map does.

Still the exact extent and severity of the weather — how high the temperature will rise, how fast the winds will blow, and how low the humidity will get, and where — is still just a prediction. This means we would all do well to exercise caution, and be prepared.

It does not appear that Pacific Gas & Electric is yet threatening a power shut-off in Mendocino County, or anywhere west of State Route 99 — the 99 being the informal edge of the Sierra Foothills. This page on their website (link), shows a map of California broken down by fire threat areas, with an accompanying chart showing whether areas are at risk for a “public safety power shut-off,” PG&E’s term for a preemptive power shut-off when critical fire weather is occurring. The shows our region with an “elevated” potential, which is lower than a “watch.” A “warning” means that a power shut-off is very likely or imminent. However, the chart does not appear to have been updated since this morning, so it’s not clear what the risk of a shut-off is. We will likely know more tomorrow.

During this kind of weather everyone is urged to use caution, and refrain from preforming activities like mowing the law during the heat of the day, which can spark a fire. We all remember that the Ranch Fire, which grew into the largest fire in California history, was started by a tiny spark thrown off from a steel stake and a hammer.

In the next she talks about defensible space:

We will continue to update with more information. Now here’s a few more maps, and tweets from the NWS:

And this turn in the weather is arriving right with the turn of the season as tomorrow marks the autumnal equinox: