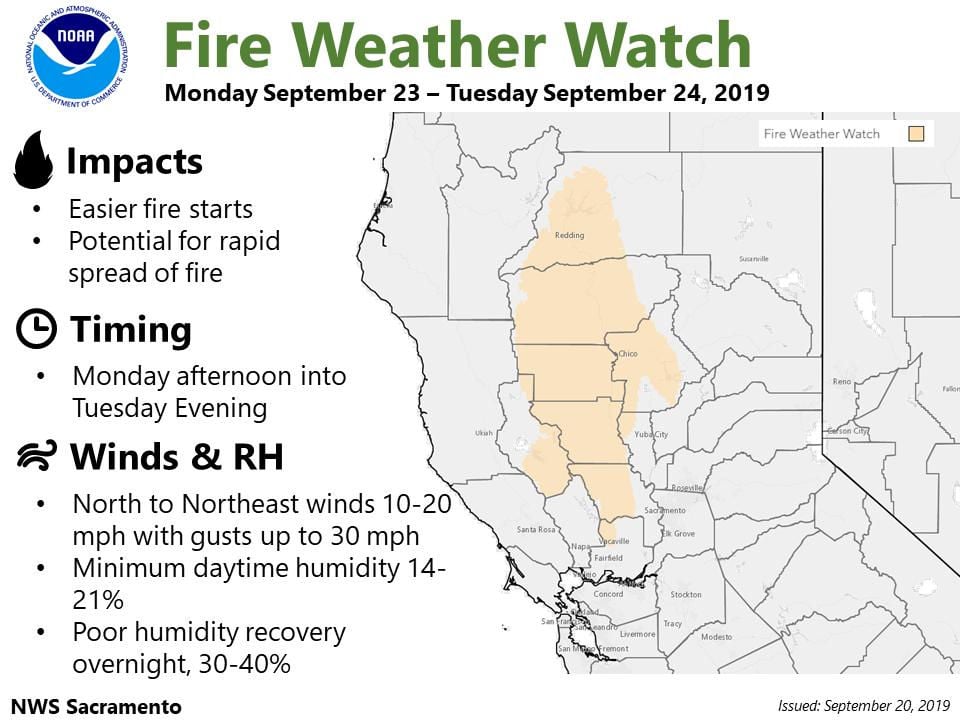 UPDATE 9:22 p.m. — The fire weather watch has been upgraded to a red flag warning. Here are the details:

ORIGINAL
MENDOCINO CO., 9/22/19 — A “fire weather watch” has been issued for portions of the Central Valley and Sierra Foothills, as well as parts of Lake and Sonoma counties. The exact extent of the warning is unclear, and anyhow somewhat inexact, and similar weather will also likely be present in the eastern stretches of Mendocino County. The watch will begin Monday evening and continue through Wednesday.

The the watch has not risen to the level of a formal “red flag warning,” nor has Pacific Gas & Electric (PG&E) stated, so far, that they will be definitely be cutting power to anywhere in the region. However, they have warned that they might cut power to a swath of customers in the Sierra Foothills region, mostly east of State Route 99. They have not issued a “watch” for Mendocino County.

Though temperatures are expected to temper today, they will again rise substantially Tuesday and Wednesday, and in combination with an expected northerly, low humidity, wind, this means that conditions will be ripe for a fire to catch and spread.

For more details on exactly what PG&E is planning you can see the map of affected areas at this link, and watch to see if the potential shut off area changes.

Part of the reason for the in-exactitude in the report that you are currently reading, is that the National Weather Service (NWS) offices in Sacramento and San Francisco have put out different maps of the weather watch, while the office in Eureka, which nominally covers Mendocino County, has not put out any such map. Thus the Sacramento map shows a portion of Lake, but none of Sonoma or Mendocino as part of the watch; while the map from S.F. shows the northern portion of Sonoma, right up to the county line with Mendocino, covered by the watch.

PG&E has a map (see the map at this link) of their coverage area broken down by fire threat zones, along with a chart showing the level of shut off urgency in these zones. According to that chart, most of Mendocino County will have an “elevated” shut-off potential, which is one step below a “watch.” A formal “warning” is the highest level on their chart. This is somewhat confusing because the NWS appears to be using a slightly different nomenclature.

We will try to clarify this situation on Monday morning, when then various offices will likely further refine and revise their forecasts, but for now it seems advisable to be prepared for some risky weather throughout the region.

And if you were wondering what to do in such cases, and what it all means, the NWS made a very nice graphic with some info:

Here is the tweet concerning the watch from Sacramento:

Here is the forecast for upcoming temperatures, with Ukiah duly noted:

And here is a word about the wind:

And for those of you who’ve made it all the way to the bottom of this thumbnail article, here’s a bonus — there’s a good chance of some rain showers later on in the week: