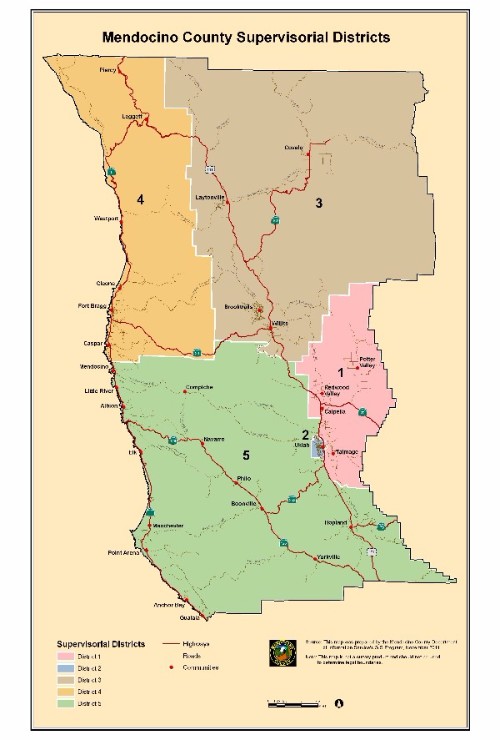 MENDOCINO Co., 8/10/19 — The California primary election will be held a little earlier than usual this year, March 3, 2020, and that means that though it’s still summer, several people have already thrown their hats into the ring, vying for the supervisorial seats from Ukiah and Potter Valley-Redwood Valley.

The general election won’t be held until Nov. 3, 2020 — 15 months from now — still, we’ve gotten several inquiries from readers, curious about who is running, and we like to listen to our readers, so we asked the county’s elections office for a list of everyone who has declared their campaign so far.

This list is not exhaustive and many people have informally announced their intentions, or at least floated the idea, without having formally declared. If you are one of those people we encourage you to email us or message us via Facebook, and we will add you to this list.

In order to qualify for the ballot, candidates must pay a fee equal to 1% of the yearly salary of the office, or $855.50 in this case — or collect a number of signatures equivalent to a percentage of the voting population. The formal filing period runs from Nov. 11 to Dec. 6, though candidates collecting signatures must collect those between Sept. 12 and Nov. 6. If the incumbent fails to file there will be an extension date from Dec. 7 to Dec. 11.

Judicial seats 2, 3, and 7 are also up for grabs this election cycle. Mendocino County holds its elections for single offices in gubernatorial years, so sheriff, D.A., registrar, etc. are not up for grabs this year. Also, we have not yet reached the period to put measures on the ballot, and there are as yet no measures announced for the upcoming 2020 primary.

The District 1 seat is currently held by Supervisor Carre Brown, of Potter Valley, though she has indicated that she will retire after this term. That district includes Redwood Valley, Calpella, Potter Valley and Talmage.

The candidates who have filed a declaration of intent to run, which is different than actually filing to run, are:

John Sakowicz, who declared his intention Jan. 12, lists his address on El Dorado Rd. just north east of Ukiah, and just inside the District 1 boundary. Here is his website: www.johnsakowicz.com.

James Green, who declared Feb. 2, is also in the Ukiah area, on Deerwood Dr. just south of Lake Mendocino. Here is his website: jamesgreensupervisor.com.

And Jon Kennedy, who declared June 26, is on Central Ave. in the Calpella area, just west of U.S. Route 101. Here is his campaign page: www.jonkennedyforsupervisor.com/

District 2, which sits mostly inside the City of Ukiah, has Supervisor John McCowen as its incumbent. Though McCowen has not formally declared, it is widely assumed that he will be running for another term.

Maureen “Mo” Mulheren, a former insurance broker and member of the Ukiah City Council, has been campaigning actively for some months, having declared on Jan. 31. She lists her resident on Washo Dr. in Ukiah. Here is her campagin’s site and Facebook page: www.mo4mendo.com, www.facebook.com/mo4mendo.

Joel Veikko Soinila, a Ukiah area real estate agent, is also running. He declared May 8, and lists his residence as Alice Ave. Here is a link to his real estate website: veikkoproperties.com/real-estate-agent.

District 4 covered the northern section of the Mendocino coast, beginning from a point roughly between the Town of Mendocino and Fort Bragg, and running north. It includes much of the forest between the inland valleys and the coast, and also the villages of Leggett and Peircy on U.S. Route 101. The seat is currently held by Supervisor Dan Gjerde, and no one has formally declared for that seat. It is assumed that Gjerde will be running for reelection.