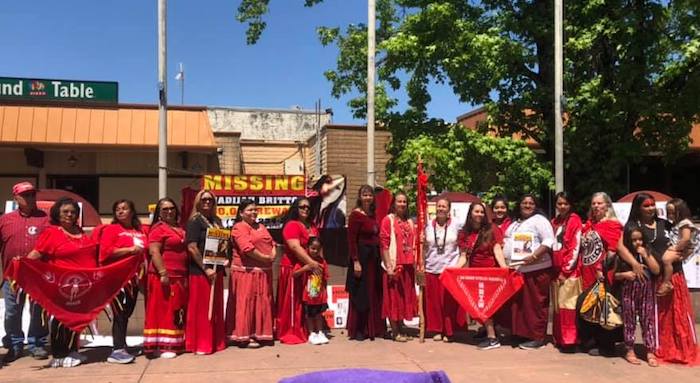 About 30 people gathered on May 5 in Ukiah as part of an international day of awareness for the MMIW movement; photo courtesy of Stephanie Britton.

MENDOCINO Co., 5/16/19 — On Sunday, May 5, North Coast residents gathered in the center of Ukiah’s Alex Thomas Plaza to raise awareness of the local indigenous women who have been killed or gone missing, as part of a national day of awareness for the Missing and Murdered Indigenous Women (MMIW). Wearing red and holding signs with the photographs of local women, the group gathered in a prayer circle to commemorate the lost women, to bring healing to their loved ones, and to educate the broader public as to the serious issues facing indigenous communities, and show their connection to other missing and murdered women across North America.

“We want to let everyone know we are going to continue fighting this and putting ourselves out there, and trying to bring this awareness to our community,” said Michelle Merrifield, the event organizer and a relative of Khadijah Britton, who has been missing from Covelo since February 2018. “We need to take care of this before this happens. We need to talk to our young ladies, and kids, and sons — so it doesn’t go this far. We need to take a stand and stop this now, to start reversing this. This is generational trauma to our people.” In Mendocino County, a number of Native American women and men are recently missing or have been murdered over the last several years, including Khadijah Britton, Nicole Smith, Rachel Sloan, and Belle Rodriguez.

Khadijah Britton was last seen allegedly being forced at gunpoint into a car by her ex-boyfriend, Negie Fallis. Her absence has drawn widespread concern, and resulted in multiple ongoing searches, including assistance from the Federal Bureau of Investigation. But more than a year later, no charges have been brought against Fallis directly relating to her disappearance, nor for a previous charge of domestic violence against Britton, to which Britton herself was the primary witness. Since her disappearance, Britton’s friends and family have emphasized that her story has much in common with other Native American women and children, and her case has been highlighted in numerous marches and other events around the state.

Fallis was jailed for a felony firearm possession, along with his accomplice, Antonia Bautista-Dalson. A substantial reward of $85,000 for information leading to finding Britton, plus another $25,000 for a conviction in her case, remains available. “Everybody’s just silent about it, no one is saying anything,” said Merrifield, of her relative’s absence. “It’s a small community, but everyone knows everybody, but no ones talking, no one wants to give names. That scares me.”

Statistics from the Department of Justice show that four out of five Native American women are affected by violence, and face homicide rates ten times higher than the national average. Exact estimates are difficult, sine law enforcement records are often incomplete or unreported in the cases of Native American women. A 2018 report found an estimated 501 minimum number of missing or murdered women across the U.S., with at least 40 victims in California, but other lists go over 700.  On Monday, May 6, California legislators designated May a statewide month of awareness for the MMIW movement. Proposed legislation called “Savanna’s Act,” has also been introduced in the U.S. Senate and in the House of Representatives, that would provide resources and facilitate increased information sharing between law enforcement agencies investigating missing and murdered indigenous women.

At January’s Women’s March in Ukiah, a number of speakers discussed the MMIW movement and its relevance along the North Coast. In Mendocino County, another Native American woman, Nicole Smith, of the Manchester Point Arena band of Pomo, was violently killed by gunshots in her home in November, 2017. Smith’s children were also shot during the incident, and as of now, no one has been charged in her death. A $25,000 award has also been offered for information in her case. The body of Rachael Sloan, a 25 year old Native American woman from Laytonville, was found in 2013 inside a refrigerator near the Eel River on Highway 162, although law enforcement could not identify her until several years later. No one has been charged in her case. Other recent deaths include Belle Rodriguez, a Round Valley woman who was murdered in 2014.

At the May 5 event in Ukiah, around 30 people gathered wearing red to honor the missing women, in concert with similar MMIW events planned around the world. They hung posters with photographs and names and performed a healing ceremony. “It was very powerful and much needed medicine for us,” said Stephanie Britton, another relative of Khadijah’s, who said the gathering drew people from Santa Rosa, Fort Bragg, Covelo, Kashia, and Hopland, who brought posters of their missing loved ones. Calling the problem “an epidemic,” Merrifield said, “It goes deeper than just holding up signs, it’s a need in our communities that we are lacking…Our big prayer that day was to envision this being stopped, this vision of all our happy endings coming out.”

Merrifield pointed out that like Britton and San Francisco resident Jessica Alva, who was found dead in April, many women face violence from their partners. “Her boyfriend was the last to see her. She wasn’t amongst strangers, she was amongst friends, and now no one is saying anything…This didn’t happen one time — she’d been getting abused, no one was speaking up for her, she wasn’t speaking up for herself. We need to get together as Native people and say this needs to stop, we need to help our young ladies.”

“My prayers go out to all the families who are going through what we are going through. I wish someone would break the silence and bring Khadijah bome. We want justice for Khadijah. Her mom and dad deserve that as well as the rest of us,” Stephanie Britton wrote in a message after the event. She went on to note the importance of speaking up, saying “I’m very honored to stand next to so many strong and brave women who are willing to stand up for all women. It’s up to us women to break the cycle of domestic violence.”

Anyone with information or tips about Khadijah Britton, Nicole Smith, or other missing persons in Mendocino County should contact the Mendocino County Sheriff’s Office tip line at 707-234-2100 or the completely anonymous We Tip service at 1-800-732-7463.

Project Sanctuary provides a 24/7 crisis hotline, shelters, and other services for victims of domestic violence in Mendocino County. Project Sanctuary’s hotline for inland Mendocino is 707 463-HELP, and on the coast is 707 964-HELP.

Project Sanctuary will be hosting a traveling art show called “Sing Our Rivers Red” focused on the MMIW movement this month, with an opening reception on Friday, May 17 at the Consolidated Tribal Health Project in Redwood Valley. The exhibit will run from May 20 – 31, more details here.