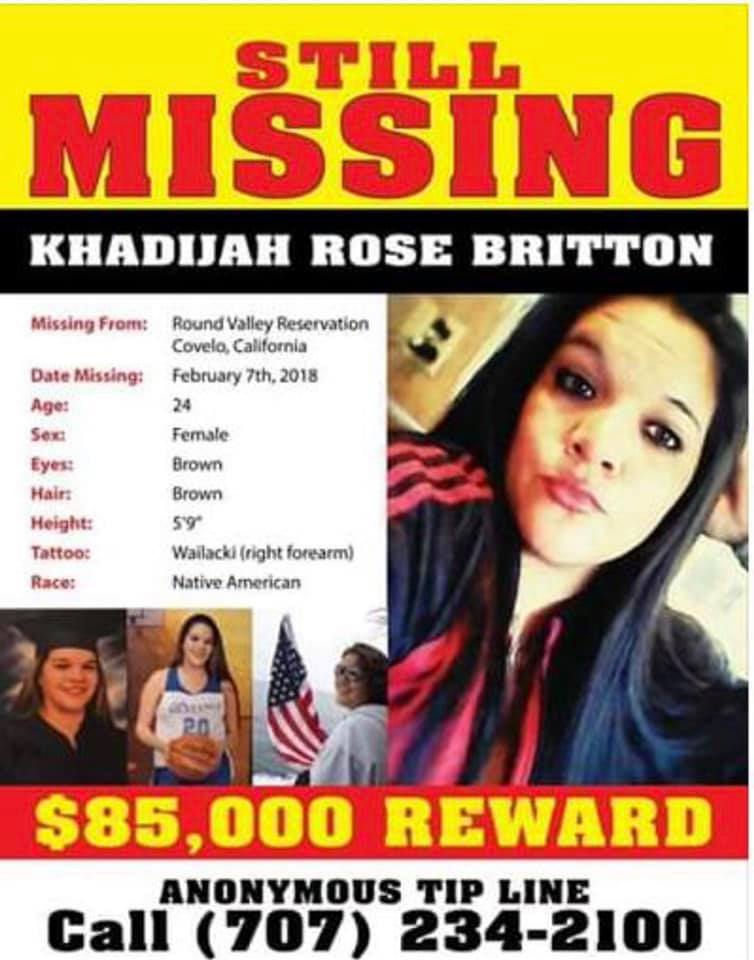 MENDOCINO Co., 4/22/19 — Khadijah Britton has been missing from Covelo for over a year, and despite the fact that the prime suspect in her disappearance, her ex boyfriend Negie Fallis, is in prison for firearm charges, Khadijah still has not been found. Britton was 23 years old when she was last seen by witnesses, reportedly being forced into a car by Fallis at gunpoint, and she would be turning 25 years old today. To commemorate the occasion, her family and friends are planting a tree in Covelo in her honor.

Britton was last seen in Covelo on February 7, 2018. Since her disappearance, there have been extensive searches by multiple law enforcement agencies, mostly recently in early March, and ongoing searches by community members. Her disappearance has attracted widespread concern, but so far no charges have been brought against anyone related to her disappearance. A $85,000 reward is offered for any information that directly helps find her, and another $25,000 is offered for information leading to an arrest and conviction in her case.

A number of videos of the tree planting today can be found in the Facebook group related to Britton’s disappearance, “Help Find Khadijah Britton.” Several people wore red to highlight the Missing and Murdered Indigenous Women’s movement (MMIW), which seeks to highlight the disproportionate rates of domestic violence and homicide faced by indigenous women in North America.

You can read The Mendocino Voice’s complete coverage of Britton’s disappearance and Fallis’ legal proceedings here.