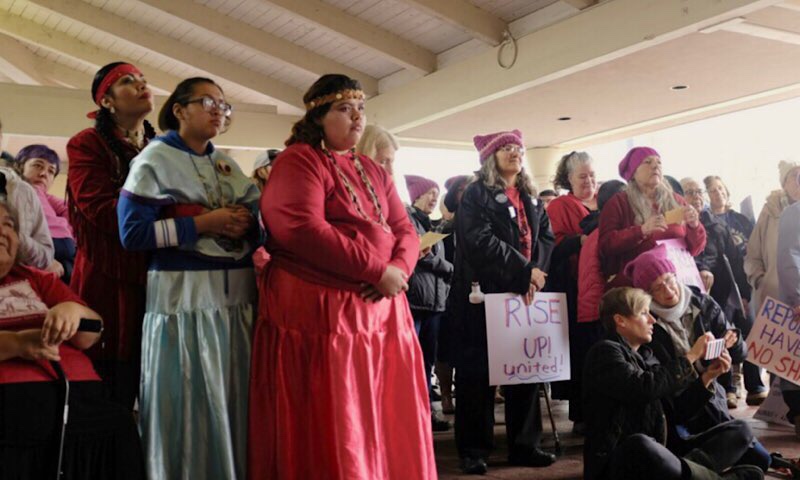 MENDOCINO Co., 1/19/19 — Around 250 people gathered today in Ukiah for the third annual Women’s March, with another march in Fort Bragg, today, in coordination with events taking place around the country. At Alex Thomas Plaza marchers stood under the pavilion to hear speakers talk about everything from family detention policies to access to health care to the importance of electing women to local government.

A number of speakers also addressed the Murdered and Missing Indigenous Women’s (MMIW) movement, and many attendees wore red to honor the missing women. Speakers including Bernadette Smith, whose sister Nicole Smith was killed in November, 2017. Smith and others called for justice for indigenous women, speaking about Nicole Smith and Khadijah Britton, a Native woman from Covelo who has been missing for almost a year. Supporters of Britton’s family also brought banners with Britton’s face to marches in Santa Rosa, San Francisco, and Reno, NV as part of a number of MMIW groups participating in the events.

We the event, and talked to marchers about why they showed up. Check out the videos below:

And here is a full video, about 1:30 hours, of the event including all the speakers. Speakers included: Bernadette Smith, Pricilla Hunter, Polly Girvin, members of the Britton Family, Jackie Orozco, Judy Shook, Mo Mulheren, Madge Strong, Debbie Ramirez, Katrina Bartolomie, along with many singers.