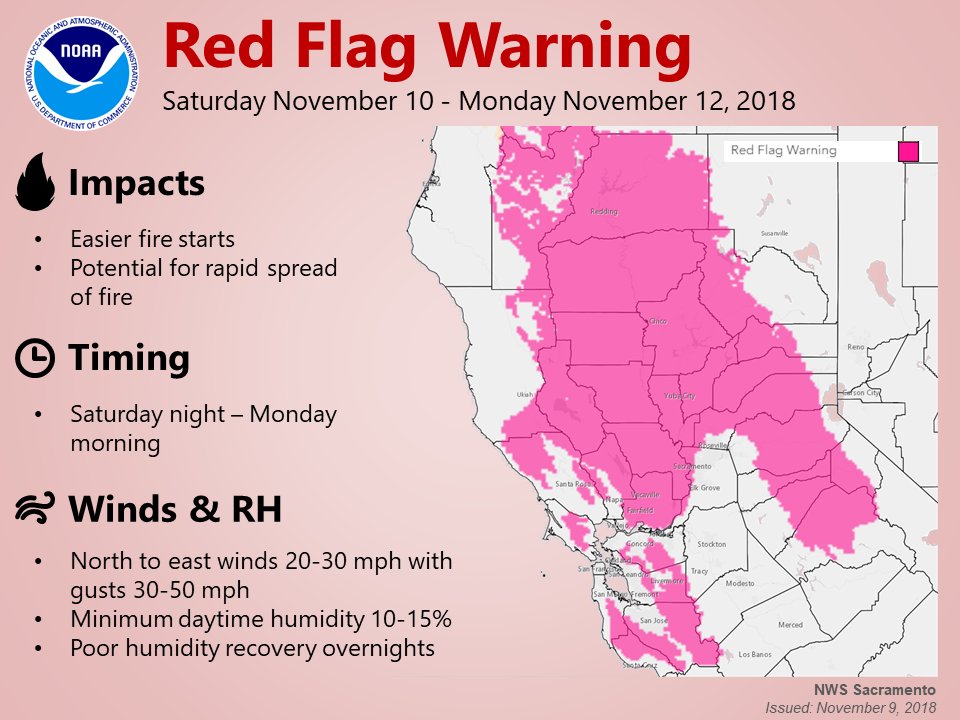 WILLITS, CA, 11/08/18 — A new red flag warning, which means that dangerous fire weather has been forecast and that there is a heightened risk of fire, has been issued by the National Weather Service for large portions of Northern California, including inland Mendocino County. The warning was issued mid-day Friday, and will be in effect from Saturday evening at 5 p.m. until at least 8 a.m. Monday morning.

A red flag warning is issued when conditions such as low relative humidity, high temperatures, and high winds are likely to occur. This weekend, the National Weather Service (NWS) is predicting that winds will increase, creating a greater potential for fire. Parts of Mendocino County and large portions of the state were also under a red flag warning earlier this week, and a number of large fires have broken out around the state — the largest of which, Butte County’s Camp Fire, brought a thick layer of smoke and hazardous air conditions to Mendocino County, prompting the closure of county offices and schools on Friday. The Camp Fire grew over 70,000 acres in 24 hours and after 48 hours is now 90,000 acres and 5% contained —- making it already among the among the most destructive fires in state history.

Locally, a smaller fire in the Dos Rios area ignited on Thursday, and there is no rain is in the ten day forecast. The NWS advisory for this weekend notes:

Another offshore flow event is expected to develop across northwest California this weekend, promoting gusty easterly winds mainly over upper slopes and ridges above 3000 ft in elevation. In addition, very dry air across the inland areas will allow relative humidity values to fall to near 10 percent during the daytime along with very poor recovery at night.

As fires continue to burn statewide, air quality continues to be unhealthy around the county, particularly in the Ukiah area, which at points on Friday had the worst air quality of any location in the United States. Unhealthy air quality is expected to continue around Mendocino County and across the region for the next several days. Residents are advised to avoid outdoor activities, and N-95 masks are recommended. Free masks will be available at inland Mendocino County library branches during operating hours.

Here’s a map of one of the red flag regions from NWS: