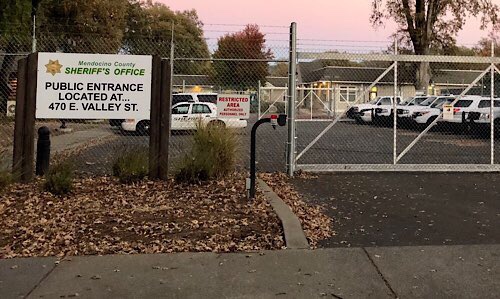 The Willits substation of the MCSO, the county offices and probation office are all located in this vicinity.

WILLITS, 11/5/18 — A bomb threat was called into the Mendocino County probation offices in Willits today — the Willits Police Department and MCSO conducted a search, assisted by Little Lake Fire on stand-by, and thankfully no explosive device was found. However, as a precautionary measure those offices and nearby offices were evacuated, and many county workers were sent home early.

Sometime around 2:45 p.m. today, the Garberville California Highway Patrol (CHP) office received a call with a bomb threat to the probation office. Often 911 calls made from cellphones are routed initially to the CHP and then transferred to local departments. The WPD and MCSO responded, though the area is within the WPD’s jurisdiction the MCSO assisted with manpower and technology. The area was searched and cleared by about 5 p.m.

WPD Chief Scott Warnock explained that such calls are not uncommon, and that while they are overwhelmingly false threats, they are nonetheless all treated seriously. A similar threat was made against the same building only a few weeks ago, and threats have been made against other county offices, like CPS, as well as against City Hall, other municipal buildings, and even against private businesses. And though the vast majority of the time such threats are just that, empty threats from angry people, according to Warnock, “We take them all seriously.”

No suspect is currently in custody, but an investigation into the threat has been started.