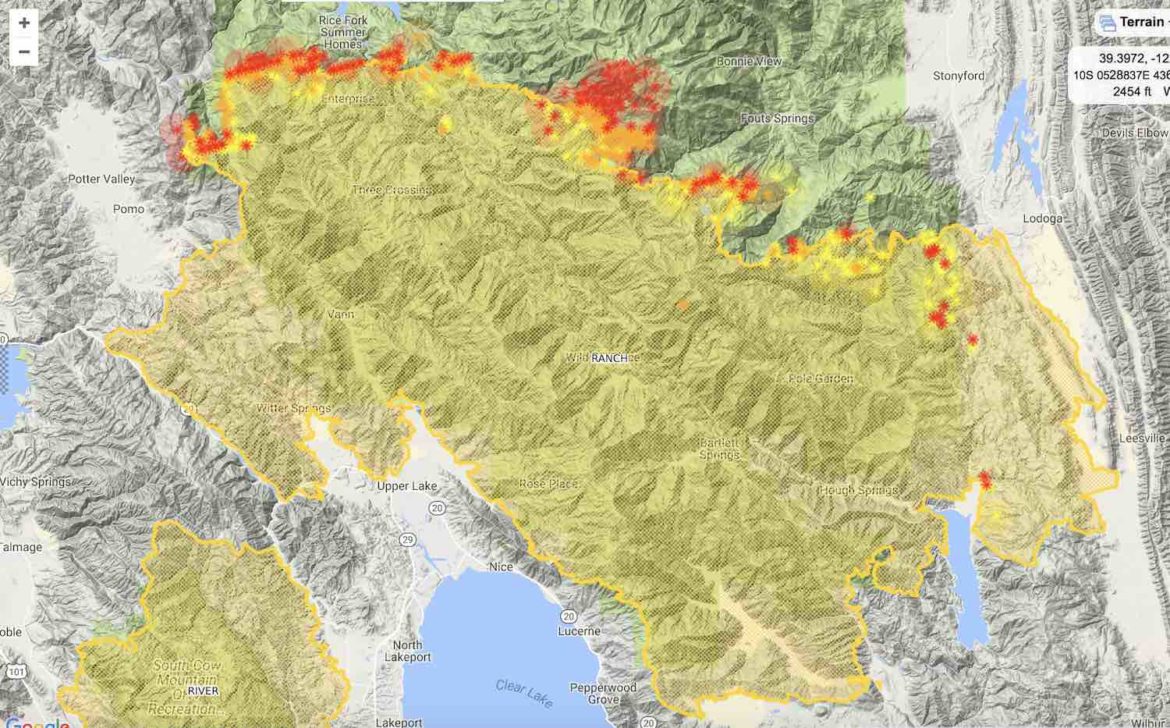 MENDOCINO Co., 8/12/18 — As of today the Ranch Fire, alone, has attained the terrible distinction of being largest fire in recorded California history. Though the Mendocino Complex, as a whole, surpassed the Thomas Fire as the record-holder several days ago, that was actually the combined acreage for both the River and the Ranch fires. The Ranch Fire is now at 287,479 acres and containment is now at 62%. The River Fire has not grown since last night and not grown significantly in several days; containment on that fire has reached 93%. CalFire puts count of the number of residences and structures destroyed at 146 and 118 respectively.

The Ranch Fire has continued to grow over the last several days, particularly along its northwestern flank in the Mendocino National Forest, where establishing containment lines has proven exceptionally difficult due to a lack of access points, steep terrain and heavy fuels loads. In contrast, the River Fire has not grown significantly and containment has been steadily increasing; crews are patrolling the perimeter to ensure that fire suppression efforts are holding, and generally mopping up.

The past week has seen tremendous successes on both the River and the Ranch Fire. On the Ranch Fire the entire southern and large parts of the eastern, sections of the fire have been largely contained with a few isolated hotspots. This has allowed for the lifting of evacuations across both Mendocino and Lake counties, all along the Hwy. 20 corridor. One indication of this success in is CalFire’s count of the structures threatened by the fires which has dropped dramatically over the last week, though about 1,025 structures remain in the potential path of the blaze.

The Ranch Fire remained active in the northwest this afternoon, approaching the Rice Forks area, and burning very actively to the south and east of Lake Pillsbury. It also put off a great deal of smoke that filled the Ukiah Valley temporarily. The Lake County Sheriffs Department re-sent a mandatory evacuation notice to residents in that area, reminding people who had not left that a mandatory evacuation remained in place, and sources in the area said the fire was approaching the south bank of the Eel River. The air attack had to be delayed until later in the day, when smoke cleared and visibility improved. The fire also has been difficult to access in the Snow Mountain Wilderness area.

The Ranch Fire is also active near portions of Mid-Mountain Road above Potter Valley, and that road remains closed. Crews are in the area building dozer lines tied into the road system in order to prevent the fire from moving westward.

In the northeastern sections of the Ranch Fire, crews are continuing to tie in dozer lines, and construct contingency dozer lines on ridges ahead of the fire.

California Senator Kamala Harris was in Middletown on Thursday, where she visited a nearby evacuation center, and spoke with firefighters at the Middletown CalFire Station, and gave a brief statement to the press.

At the CalFire station in Middletown, Harris pointed to her proposed wildfire legislation as a fix that would increase federal funding for California’s firefighting efforts, saying the state had spent four billion dollars fighting fires between 2003 and 2012.

Harris also noted that she supports local control in wildland management, saying that it was important to listen to the knowledge of local experts who had been fighting these wildfires. You can watch the video of her appearance below.

The shelter at Mendocino College has been closed, but two “local assistance centers” have opened in Lakeport and Lucerne where people can get services from a variety of agencies. The centers will remain open until August 17.

Here is the video of Senator Kamala Harris:

You can read more information about how to help and cope with the wildfires in these articles:

Info and resources for families dealing with wildfire stress

Coping after a disaster: Advice from a hospital chaplain

How to help with the Mendocino Complex, where to donate, and info about fire recovery