Banner about Khadijah Britton's disappearance hung outside the Willows' Walmart.

UKIAH, 8/27/18 — Antonia Bautista-Dalson, 21 of Covelo, plead not guilty in Mendocino County Superior Court today to felony charges of harboring, concealing, and aiding Negie Fallis, who is accused of being a felon in possession of a firearm, and who will go to trial on October 15. Fallis is the primary suspect in the disappearance of missing Covelo woman, Khadijah Britton, who was last seen by witnesses allegedly being forced into a car at gunpoint by Fallis in Covelo on February 7.

Bautista-Dalson, who is known to be romantically involved with Fallis, is accused of helping him hide several firearms during a search of a Covelo residence on February 19th, where Fallis was allegedly hiding and where he was subsequently arrested on a warrant related to a reported beating of Britton. She is also accused of hiding a wanted felon. No charges relating to Britton’s disappearance have been filed against Fallis, although he will face the charge of possessing a firearm in October. The charge against Bautista-Dalson is not directly related to Britton’s disappearance; instead, it stems from allegations that she assisted in hiding Fallis and helping him possess of a firearm, which is illegal because he is a felon. 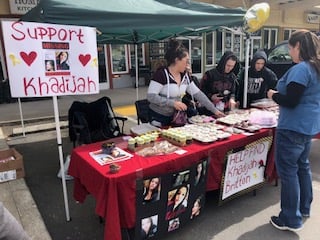 Supporters held a bake sale in Willits to raise funds to search for Khadijah Britton.

Volunteers, including friends, family, and visitors from across the country, conducted a two day search for any clues related to Britton’s disappearance on August 18 and 19, but the search was unsuccessful. Banners, flyers, and billboards featuring the 23 year old woman’s face and information about her disappearance have been put on display by the community around Northern California, from Round Valley to Willows to Chico to Lake County, with fundraising and search efforts ongoing.  A Facebook group started to help locate her has over 4,200 members, and family members have highlighted the similarities between her disappearance and other cases of domestic violence and missing Native American women around the country. Britton’s family continues to offer a $50,000 reward for information that helps find her. The Mendocino County Sheriff’s Office encourages anyone with information to contact the anonymous tip line at 707.234.2100.

Bautista-Dalson was arrested by Mendocino County Sheriff’s Office deputies on August 21 in Covelo, with a $15,000 bond, and posted bail two days later. She appeared in court today to enter a not guilty plea, and is expected to appear in court again on September 6 and then again on September 11 for a preliminary hearing. The role of Bautista-Dalson in assisting Fallis with hiding several firearms in a Covelo residence, prior to his arrest, was outlined in part during Fallis’ preliminary hearing: she is accused of assisting Fallis in hiding several firearms at the residence, and of aiding him in developing a plan to keep the firearms hidden, subsequent to his arrest in phone calls made to him while in he was in jail. Deputies later uncovered firearms after Fallis was removed from the residence.

Both Bautista-Dawson and Fallis are currently out on bail; Fallis was released in late June after being in custody since February 19. In court today around 10 a.m., Judge Ann Moorman noted that Bautista-Dalson had not appeared for her scheduled plea at 9 a.m., until another public defender noted that he had seen her public defender present in the courthouse. Bautista-Dawson then appeared to enter her not guilty plea. She will be expected to appear at her upcoming court dates otherwise a bench warrant will be issued for her arrest.

As of now, the charges against Fallis related to an alleged violent attack against Britton in January have been dropped, although they could be brought again, and no charges have been brought by the D.A. related to Britton’s disappearance. Mike Geniella, spokesman for the D.A., noted, “This is part of an ongoing investigation, and we’re not going to discuss specifics.”

You can read The Mendocino Voice’s complete coverage of Britton’s disappearance here.