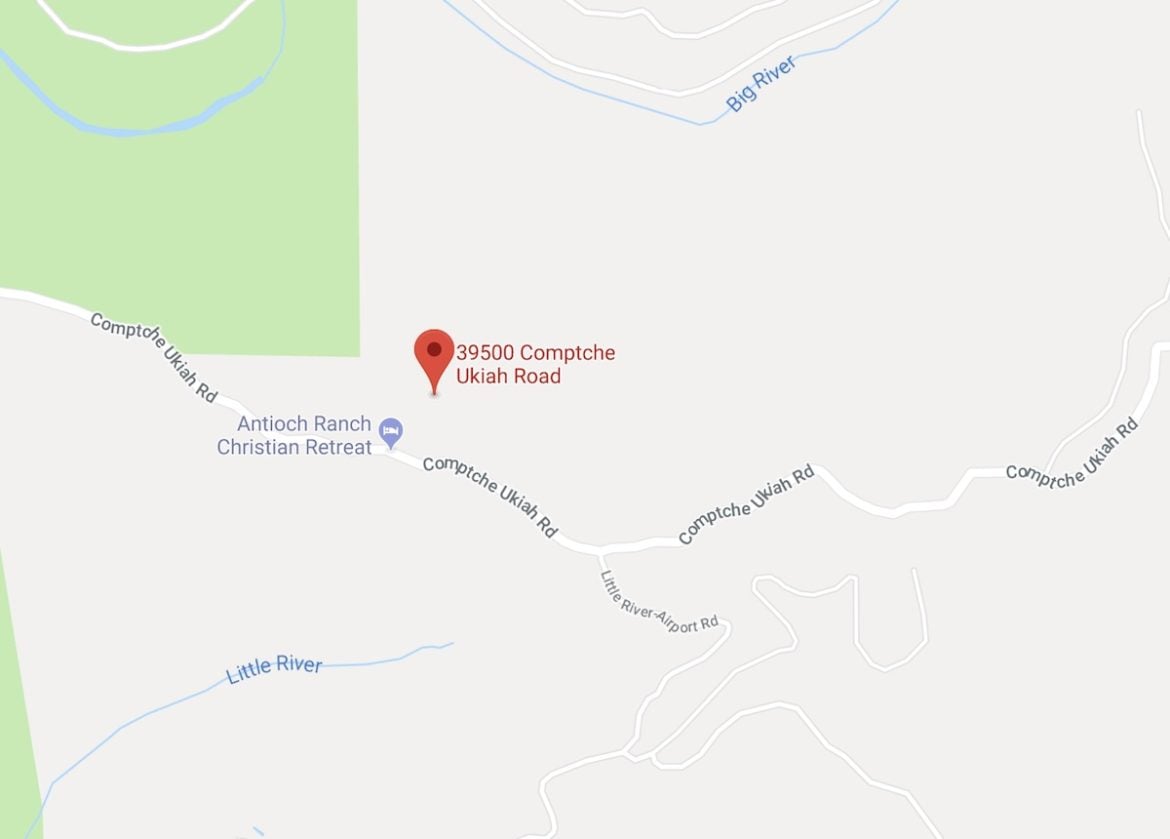 General location of the missing object given by MCSO

MENDOCINO Co., 7/14/18 — The Mendocino County Sheriff’s Office requests the public’s help in locating an object that may have been stolen from a recently deceased man’s Little River residence, and then discarded on the Comptche-Ukiah Road on July 11.

A July 14 press release from the MCSO outlines the events: two Fort Bragg men allegedly were in the middle of robbing the Little River home of a recently deceased man, Douglas Minkler, 60, of Glendora, CA, when the Sheriff’s Office was notified. The suspects, Elijah Bruce Swithenbank and Bo James Eder, both 38, from Fort Bragg, then took off on Little River Airport Road. The two men were subsequently identified while driving on the Comptche-Ukiah Road and detained by deputies. The two men were allegedly found with burglary tools and items associated with the Little River residence.  They are also suspected of discarding or hiding other objects that may have been stolen along the roads.

General location of the missing object given by MCSO

Just before the two men were apprehended by the Mendocino County Sheriff’s Office, deputies observed their car pass by an “an object similar to a box lying in the roadway between Little River Airport Road and 39500 Comptche-Ukiah Road.”  That box-like object may have been discarded by the suspects, and may be related to the investigation. Deputies returned to the area and tried unsuccessfully to locate the object in that area after the arrests. It is now believed to have been picked up and taken by another driver passing by — and the Sheriff’s Office wants to find it. Do you know what that box-like object is, or who has it? If you do, MCSO requests you contact them at 707-234-2100.

Eder and Swithenbank are currently charged with first degree burglary, conspiracy to commit a crime, and possession of burglary tools; Eder is also charged with probation violation. Bail was set at $50,000 and both have already posted bail.

Synopsis:
On 07-11-2018 at approximately 1717 hours, the Mendocino County Sheriff’s Office received a call for service for an interrupted burglary in progress at a residence located in the 7000 block of North Highway 1 in Little River.

During their response, deputies encountered a vehicle traveling on Comptche-Ukiah Road towards North Highway 1 from Little River Airport Road.  As a result of the vehicle matching the description of the suspect vehicle, deputies made contact with the two occupants and identified them as Bo Eder and Elijah Swithenbank.

Other deputies responded to the location of occurrence and determined a burglary had occurred to a residence belonging to a recently deceased person and stolen property from that residence was missing.

Deputies conducted a search of the Comptche-Ukiah Road and Little River Airport Road areas and located several more items of property concealed off the roadway.  This property was also confirmed stolen from the residence.

Both Eder and Swithenbank were transported to the Mendocino County Jail where both were booked on charges of first degree burglary, possession of burglary tools and conspiracy to commit a crime.  Eder was confirmed to be on active misdemeanor probation and additionally charged with violation of probation.  Both are being held in lieu of bail set at $50,000.00.

When responding deputies observed the suspect vehicle travelling the opposite direction on Comptche-Ukiah Road, they passed it, turned around, and caught up to it.  During that time, deputies observed an object similar to a box lying in the roadway between Little River Airport Road and 39500 Comptche-Ukiah Road.  Deputies believed the object was thrown from the vehicle by the suspects after law enforcement was observed.

Deputies returned to the area where the object was last observed and were unable to locate it.  It is suspected that the object was retrieved by a passing motorist. Mendocino County Sheriff’s Office is asking any person with knowledge of that property to telephone 707-234-2100, so it can be determined if the property is associated with this investigation.