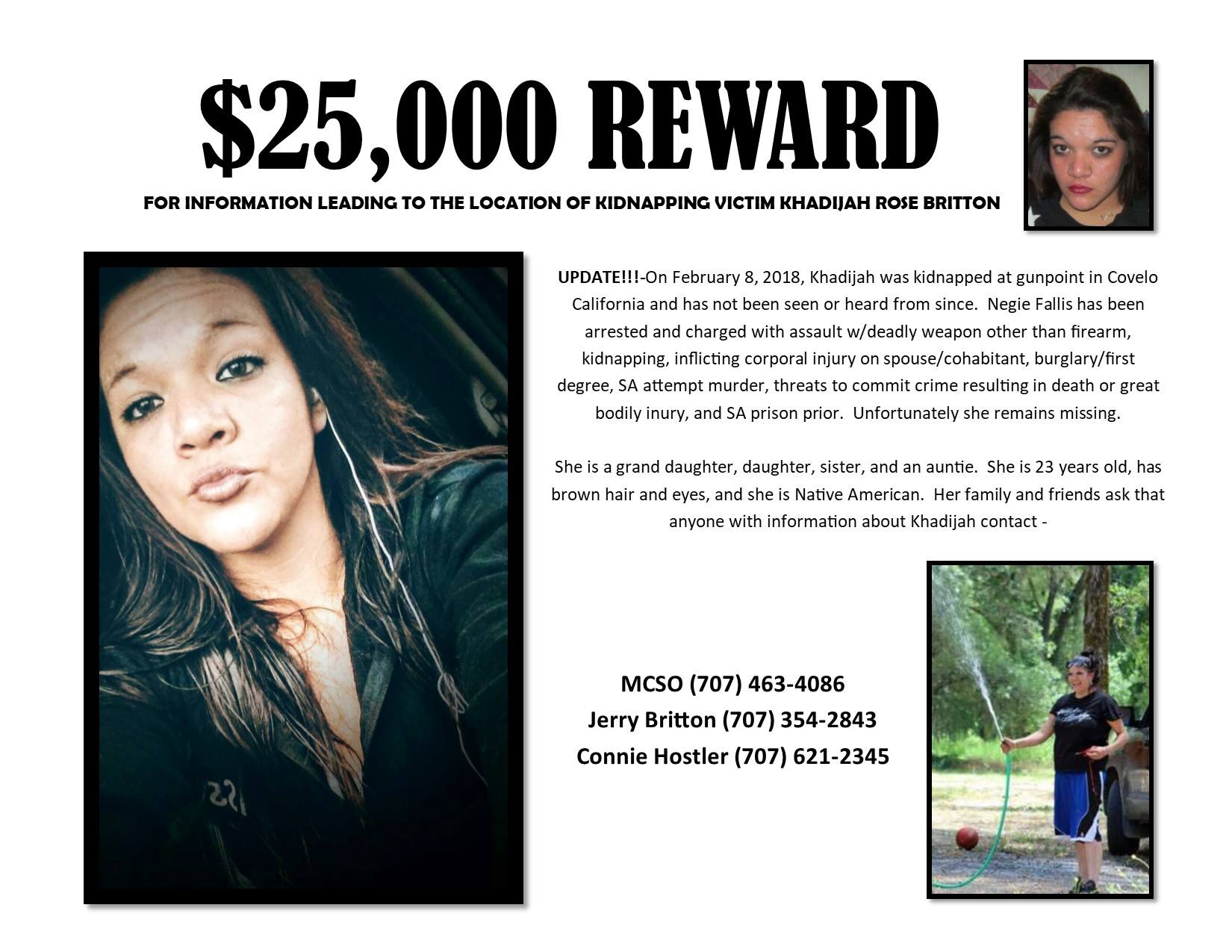 The reward has been raised to $25,000 to find Khadijah Britton.

Update 2/25/18 — The reward for information leading directly to finding Khadijah Britton has been raised to $50,000. Here is the our latest reporting on the situation, in an article published Feb. 24. Scroll down for the original article about the vigil.

ORIGINAL
MENDOCINO Co., 2/23/18 — A vigil for missing woman Khadijah Britton, 23, of Covelo, will be held on the steps of the courthouse in Ukiah on Tuesday, February 27 at 8:30am. Britton has been missing since Feb. 9.

The vigil will be held during the arraignment of Negie Fallis, the primary suspect in Britton’s disappearance. Fallis, 37, of Covelo, was arrested in Covelo on February 19.

Britton was last seen around midnight in Covelo on February 9. Her disappearance has prompted an outpouring of concern from family, friends, and community members who want to see Britton return home safely. A reward of $25,000 is being offered for any information leading directly to finding her. A Facebook group called “Help Find Khadijah Britton” has grown to over 1,600 members, and a GoFundMe page set up to assist with the search has raised almost $800 as of the time of publication.

The vigil is described by organizers as “A peaceful, prayerful gathering in front of the courthouse in Ukiah Tuesday at 8:30 am is requested to show solidarity and ask for answers.” Organizers added, “Khadijah Britton has many family and friends who wish to see her return safely to them.” The details are included on the event Facebook page. Fallis’s arraignment is scheduled for 9am in courtroom B. 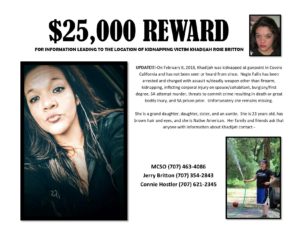 The reward has been raised to $25,000 to find Khadijah Britton.

Britton is a 23 year old Native American woman with brown hair and brown eyes, about 150 lbs., described as a “granddaughter and daughter, sister and auntie.” The Mendocino County Sheriff’s Office is the lead agency in the investigation and should be contacted with any information about her disappearance by calling (707) 234-2100 or emailing [email protected]. Her family can also be contacted by calling Connie Hostler at (707) 621-2345, or Jerry Britton at (707) 354-2843.

A previous candlelight vigil was held on Thursday evening, February 22, in both Ukiah and Covelo. (A video from that vigil courtesy Dos Mundos is included below.)

Fallis and Britton previously dated, and the two were last seen together on February 9. Witnesses reported to the MCSO that he arrived at a residence with a firearm and demanded she exit the residence, after which the two argued and left the scene in a black Mercedes together. The original press release can be read here; Fallis was previously wanted on charges of domestic violence involving Britton. Fallis was captured in Covelo by Round Valley Tribal Police on February 19. The MCSO has continued the search for Britton since his arrest.

Video of the Feb. 22 vigil in Ukiah from Dos Mundos: