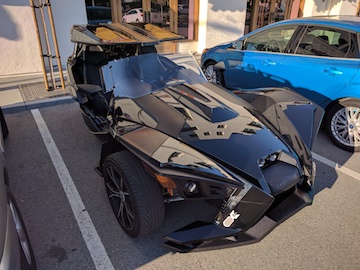 A three wheeled Polaris Slighshot, similar to one stolen from Roseville, by Grendelkhan/Wikimedia Commons.

MENDOCINO CO., 5/25/17 — A white man with a mohawk driving a stolen 3-wheeled motorcycle at high speeds through the Fort Bragg area on May 21 evaded Mendocino County Sheriff’s Office deputies after they attempted to initiate a traffic stop. When deputies attempted to pull the suspect over due for excessive speeding, he led pursuing deputies on a high speed chase for five blocks on Simpson Lane, causing oncoming traffic to swerve out of the way to avoid collisions, according to an MCSO press release issued today. At the end of the chase, the driver abandoned the motorcycle and fled on foot. 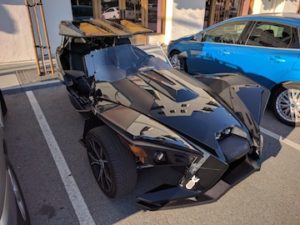 A three wheeled Polaris Slighshot, similar to one stolen from Roseville, by Grendelkhan/Wikimedia Commons.

The following day, MCSO determined that the motorcycle, a red three-wheeled red Polaris Slingshot, had been stolen from Roseville, CA. Deputies are requesting public assistance from anyone with information about the driver of the motorcycle, who had been seen transporting various individuals in the Fort Bragg and Mendocino areas on May 21.

The full press release from MCSO is including below. Anyone with information about the suspect should contact the Sheriff’s Office anonymously at 707-964-6308 or by email at[email protected]. The Mendocino Voice has not independently verified the information in this release.

Synopsis:
On 05-21-2017 at approximately 4:16 p.m., Mendocino County Sheriff’s Deputies were involved in a vehicle pursuit of a red Polaris Slingshot 3-wheeled motorcycle driven by a white male adult with a mohawk.  The vehicle pursuit was initiated after Deputies attempted to conduct a traffic enforcement stop on the driver for excessive speed.

On 05-22-2017, the motorcycle was confirmed to be stolen out of Roseville, California.  The suspect operating the motorcycle has not yet been identified.  The Mendocino County Sheriff’s is asking for community assistance in identifying the suspect who had been transporting individuals on the motorcycle that same day throughout the Fort Bragg and Mendocino areas.

Anyone with information regarding the above male subject may contact the Sheriff’s Office anonymously at 707-964-6308 or by email at[email protected].