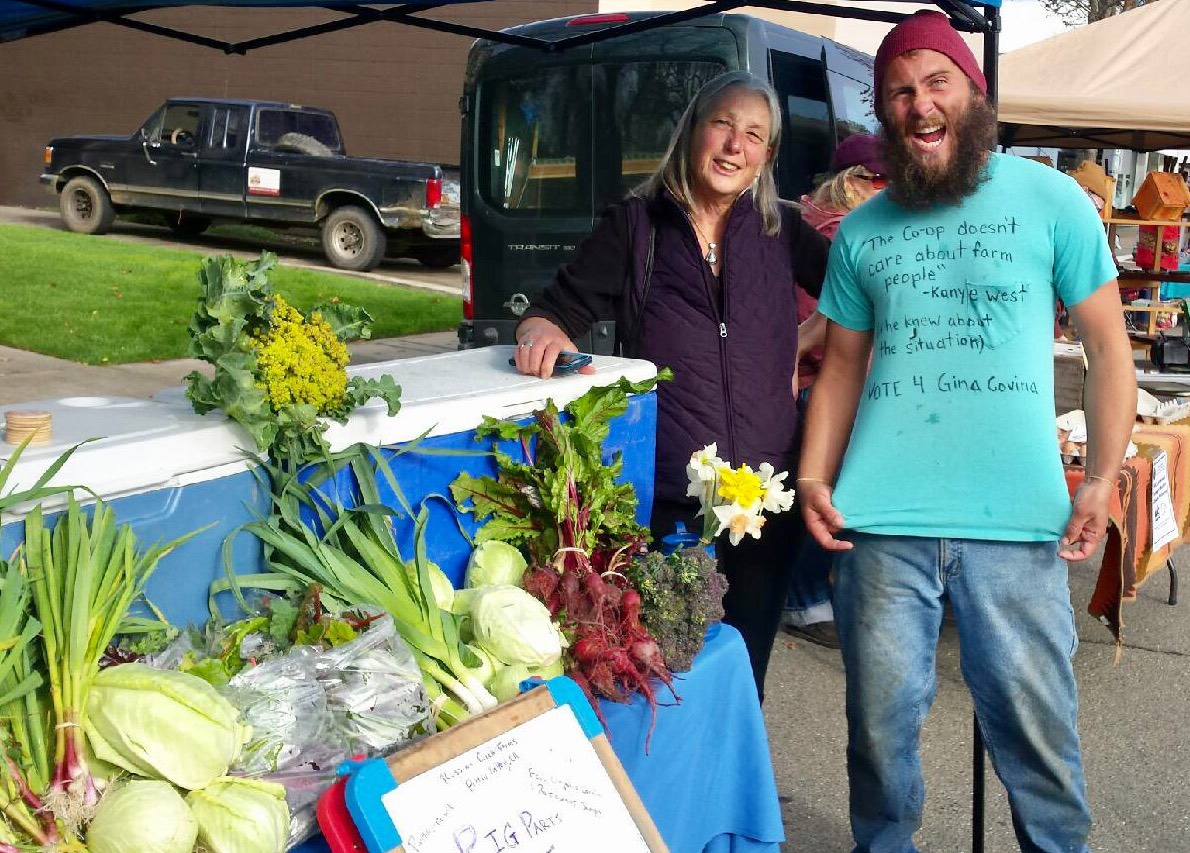 The author stands next to 10 varieties of locally produced veggies.

Editors note: At The Mendocino Voice we’re interested in hosting a lively discussion, and encourage readers who believe they might have the knack for a column to submit a pitch. We also encourage people to send in letters to the editor: [email protected]

POTTER VALLEY, 3/30/17 — After an outpouring of support for two farmers disqualified from running for the Ukiah co-op board, I thought the issue had been laid to rest. Then I read a letter to the editor from March 22nd in the Ukiah Daily Journal written by a co-op employee (link here). I realized there were still a lot of misconceptions about the topic. In addition to addressing these, I’ve included past examples of co-op behavior that give context to the sharp contrast between recent board/management behavior and the interests of co-op members. 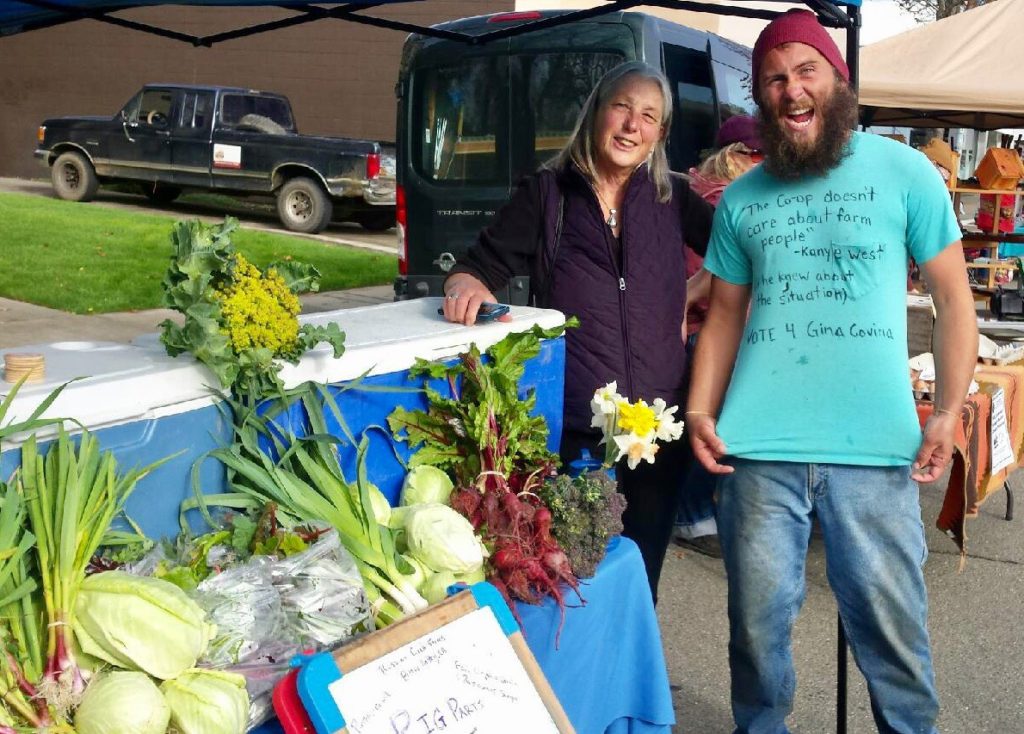 The author stands next to 10 varieties of locally produced veggies.

In the letter, the farmers and their supporters, myself included, are described as a “small group of flame-throwers attack[ing] the Co-op unfairly.” Read the candidates’ public appeal (here), my recent column (here), or either of these recent news articles on the topic (here, and here), and you will find genuine grassroots desire to improve our local food scene, not malevolent attacks on a co-op that anyone sees as a foe. If only the co-op would make substantive changes to increase the local products member/owners have asked for, instead of repeatedly dismissing legitimate community concerns. 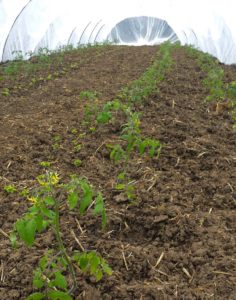 These basil and tomato plants mean that single source bacon lettuce and tomato (with pesto) sandwiches are about a month and half away.

theories, this debate is no exception. The letter claims that the farmer candidates and their supporters represent a “special-interest clique” attempting a “hostile takeover” to pack the board and manipulate a stash of funds that was previously earmarked for relocating the co-op. Look at the disqualified candidates Halle Brady or Julia Dakin selling at the Ukiah farmers market and it’s obvious their shoe-string budget ag operations are just fronts for the big money that pours into their special-interest small farmer lobby. Wait, what?!

This unfounded badmouthing would be easier to ignore if it weren’t in step with the co-op board and management’s recent behavior. Here’s some examples:

1)The co-op leadership disqualified two of three farmers running for the board on shaky grounds, then misrepresented the circumstances under which they were disqualified. 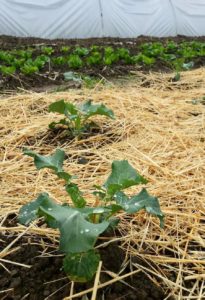 More veggies. The author believes that if he can grow all this in an inland valley, there’s no reason grocery stores couldn’t stock greens year-round.

The recent letter depicted the disqualified candidates as having failed to even check if they were eligible to run. In my column, I outlined the erroneous information one candidate got from a co-op staffer about how they would be able to run, which was only contradicted by management after she turned in her application (link above).

The co-op general manager also put out misleading information about the topic when she wrote a letter to the editor in The Mendocino Voice entitled “Co-op bylaws clearly state Dakin and Brady are not eligible to run this year.” (link) The title alone flatly contradicts multiple news articles detailing the situation, like the one written by reporter Erik O’Donnell for the Ukiah Daily Journal (link). The Mendo Voice news department also covered the topic, including the board meeting where multiple boardmembers acknowledged unclear information put out by the co-op on the matter (link). So why’d the general manager make it seem so cut and dry?

2) Last year the co-op board awarded a grant to a fellow boardmembers’ non-profit organization, while turning down a grant application from a local non-profit that distributes funds to local farmers based on their need and impact.

In 2016, the co-op board awarded a grant to the Oak Granary, a non-profit located at boardmember Cliff Paulin’s 300 acre estate in Potter Valley. Meanwhile, the board turned down an application from the Good Farm Fund’s (GFF) Grant Program. The GFF grant program has a third-party group of local farmers decide how to allocate grants to small farm applicants based on financial need and community impact.

Mr. Paulin’s non-profit is based in agriculture. Therefore, it could have applied for the grant money had it been awarded to the GFF. Instead, the Co-op Board decided to skip the option that would put the decision in a third party’s hands and gave the grant directly to the Oak Granary — which again, was co-founded by one of their own boardmembers! If this isn’t an avoidable conflict of interest, I don’t know what is.

3) The current Board has repeatedly resisted giving systemic support to the Farmers Market Food Stamp Match Program, or even allowing member/owners to vote on the idea.

In 2014, I started a petition (it got 400+ signatures in a couple weeks) asking the co-op to raise its produce aisle prices by 1% and dedicate the funds to the Ukiah Farmers Market Food Stamp Match Program (original article here). The program is the best thing going in terms of bolstering our struggling food scene. It provides much needed to support to farmers by incentivizing folks on tight budgets to become the backbone of the local food economy by subsidizing  fresh, healthy eating choices.

More support for local farms would be the fastest way to scale up production, meaning more farms could sell to places like the co-op. By supplying systemic support to this program the co-op could act as a model for jumpstarting local food systems around the county and, potentially, the nation. Instead the board and general manager responded repeatedly that they would not allow the proposal to be put to a vote by the membership no matter how many member/owners supported the idea.

Reading the latest co-op newsletter, you’d think their top priority is getting as many local goods as possible. They’ve touted having thousands of local items in the store at any given time, talked about how much money they spent on local produce, but fail to mention how small a fraction of their total sales are locally produced. In the newsletter, the assistant produce manager talks about how they work as hard as they can to support local producers, even offering to pay more than their asking price in some circumstances.

I believe this may happen occasionally, but local farmers who sell to the co-op have told me a very different story. Multiple have told me that they get more product sent back by the co-op than anywhere else, one told me they felt like the produce manager does everything she can to find something wrong with their product. I have also heard direct-from-farmer stories of having orders cut off because of a dip in sales or a slightly lower price offered by industrial-sized competitors that supply the majority of the co-op’s goods.

Here’s one case that shines light on the situation without jeopardizing any particular supplier’s relationship with the co-op. When I saw the recent letter, I went to check the selection of local goods at the co-op. In the produce aisle I saw three large posters with pictures and names of local farms. Meanwhile there was only ONE locally produced item in the entire aisle. There was a similar 3:1 ratio of marketing-ploy to genuine support for local goods last Spring as well.

5) The board regularly inspires well less than 10% of member engagement in their yearly election.

The level of voter engagement from the co-op’s members in the annual election makes Congress’ approval-rating look astronomic. This would change if the board gave the membership reason to believe their opinions matter to the future of the co-op. For example, 300+ community members supported the two disqualified candidates for this year’s election within ~10 days before the co-op board met in February. This was with strictly grassroots networking, compared to the full month of in-store voting which, in years past, has only garnered engagement from around 600 members a year.

I’m happy to give credit to boardmember John Bailey for proposing a motion at February’s meeting to seek a second legal opinion regarding the decision to disqualify the two candidates. Sadly, it was met by Mr. Paulin reiterating his argument against such a step and the rest of the board voting to confirm the agenda as it was, leaving Mr. Bailey’s motion behind.

Finally, since I have no intent to spread misinformation, I welcome the author of the letter or anyone from the co-op board or management to counter any of my statements.

I joined the co-op years ago because I thought the possibilities would be endless if you put Mendonesians in the driver’s seat of their own grocery store. I still believe this. I am writing because of mounting evidence the Co-op leadership has repeatedly stood in the way of fulfilling this potential to the detriment of our whole community.

Please co-op members, stop comparing the co-op to conventional grocery options in Ukiah. Instead imagine the life-altering changes that could be made in our local food scene if the co-op strived to truly represent the values of its members and our community at-large.

3 thoughts on “Opinion: Complaints about Ukiah Co-op More than Warranted”