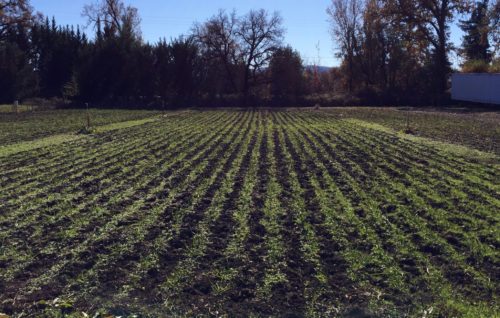 UKIAH 2/23/2017 — Members of the Ukiah Natural Foods co-op turned out in force at the most recent co-op board meeting on Monday, February 20, to ask why two local farmers couldn’t run for the board of directors. Recently, Halle Brady and Julia Dakin learned they would not be eligible to run in the March 2017 election, due to a provision in the bylaws that many members believe is not sufficiently clear. After some discussion and deliberation the board decided to uphold the decision to not allow them to run.

Both women believed they were full members, but discovered that they are “associate cardholders” to memberships held by their husbands, who are the “members of record.” Bylaws can only be changed by a member vote, but the board agreed that everyone could benefit by greater clarity in documents “across the board.” Members of the board of directors have the title director. Director John Bailey agreed he had “read a ton of documents” that were “not totally clear.”

According to board member Cliff Paulin, the co-op moved to a single member membership system on the advice of Therese Tuttle, an attorney who specializes in laws governing co-ops. Paulin conceded that “I have looked at non-legal documents that are confusing,” but told members that at the time, the co-op sent out letters to members, asking which person on each membership was the member of record. The co-op amended the membership section of its bylaws in April, 2013.

Gina Covina, an organic farmer who is running for one of the three contested seats on the nine-member board, said she regards the situation as “a clerical error,” but Director Paco Jordan said the co-op is governed by “serious rules handed down by the State of California.” Brady and Dakin will not be permitted to stand for election this year, because board candidates must have been members of record for 180 days before running.

Local farmer Ben Wolff reported that after the break in the meeting, when the Mendo Voice had left, Halle Brady said that she regularly casts a ballot in co-op elections. When she is asked to verify if she is Mike Brady, she affirms that she is and her vote is accepted. At this point, Wolff said that he and Brady’s son Quinton saw board president Elaine Boults place her hands over her ears. Wolff also reported that Bailey suggested amending the agenda to include the suggestion to seek another attorney, but that the rest of the board voted against the proposal.*

Three of the current directors will be up for re-election in 2018. Covina, Brady, and Dakin wished to run on a platform that seeks to bring more locally produced goods to the Ukiah co-op. When Halle Brady’s son Quinton asked if merchandising policies are changeable, Director Win Stiles, who is running from an incumbent position on the board, replied that directors “set policy — we don’t tell the produce manager where to buy her produce.” He encouraged local farmers to come to board meetings or be on a committee, saying, “We’d be delighted to see you.” Asked by Dakin if the board would be willing to review its merchandising policy to support more local producers, Stiles and fellow board member Larry Mayfield said they would be willing to do so, though Stiles reiterated that he was not willing to do produce manager Libee Uhuru’s job for her.

Local attorney Barry Vogel spoke during the public comment period, saying that “Laws can change.” He then provided the illustrative examples of Loving vs. Virginia, which invalidated laws against interracial marriage in 1967; the passage of Prop 64 this year; and the general relaxation of sexual mores. He suggested putting Dakin and Brady on the ballot to “See what happens.” He reminded those present that the bylaws call for an annual meeting on any Saturday in April, “For the purpose of transacting any proper business,” including director elections, according to section 5.2 of the bylaws. At that meeting, he reasoned, the membership could vote on the issue of changing the bylaws to allow the election of associate cardholders, who are sometimes referred to as “B members.” He asked the board to amend the agenda for Monday’s meeting to include his remarks, which directors declined to do.

In another attempt to make their candidacy possible this year, Brady circulated a petition at change.org, titled “Stop two local farmers from being disqualified for the 2017 Ukiah co-op board election.” The petition has collected 313 signatures, which Potter Valley farmer Ben Wolff (full disclosure: Wolff occasionally writes a column for this publication) suggested was a significant portion of the co-op membership, considering that turnout for elections is typically 5% to 10% of the 6400 members.

Non-incumbent candidates for this election are Gina Covina, and Steve Oliveria. Covina said she is running on a platform she, Dakin and Brady all agreed to. Oliveria is retired from Mendocino College, where he worked as an instructor in recording arts and the director of maintenance, security and operations. Incumbent Elaine Boults said she is “throwing my hat in the ring” after being appointed to fill a vacancy. While she admitted to being “a terrible gardener,” she told the members present that she worked for 18 hours last week on co-op business. And is “glad I didn’t try when I was not retired.” Win Stiles has been a board member for two years and is working on the board development committee. Board member Larry Mayfield spoke of his interest in the local food economy. Ballots must be cast or received at the co-op ballot box by March 31.

*This article has been updated to include Wolff’s report.

We’ve included the section about membership from the co-op bylaws below:

(a) Membership entitles a Member to one (1) vote in the affairs of the Cooperative, irrespective of the total number of shares a Member owns, and to all the rights of Membership as described by applicable law, the Articles of Incorporation, and these Bylaws.

(b) All meetings of the Board of Directors shall be open to all Members, except those meetings (or portions of meetings) provided for in Section 6.11.

Any natural person or corporation may become and remain a Member of this Cooperative by:

(a) Complying with such uniform conditions as may be prescribed by the Board of Directors, including any required purchases of Sustaining (“B”) shares;

(b) Making full payment of any non-refundable Membership fee as set forth in Section 2.04;

(c) Making full payment for one Membership (“A”) share of the Cooperative; and

(d) Being a resident of California.

A one-time non-refundable Membership fee, in an amount set from time to time by the Board of Directors, may be charged to and collected from each Member upon joining the Cooperative.

Applications for Membership shall be reviewed by the Board of Directors or by a Executive Committee (pursuant to Section 6.17 of these Bylaws) duly authorized by resolution to admit Members. The application shall be accepted unless rejected in writing within thirty (30) days for reasons satisfactory to the Board of Directors. If accepted, the applicant shall be admitted to Membership and shall be allowed to vote and hold office. If rejected, the applicant shall be entitled to a refund of any and all amounts paid for Membership fees and shares.

No Member may transfer his or her Membership or any right arising therefrom.

2.7. BYLAWS AND ARTICLES TO PROSPECTIVE MEMBERS

Each prospective Member, upon application for Membership, shall receive a copy of the Articles of Incorporation, Bylaws, and Disclosure Document of the Cooperative.