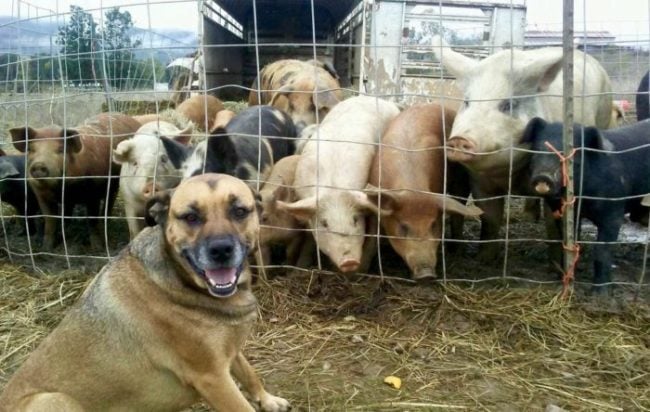 A dog and pigs

Editors note: Our own angry pig farmer, Ben Wolff, has returned to his column after a long hiatus, and we’re happy to have him back. At The Mendocino Voice we’re interested in hosting a lively discussion, and encourage readers who believe they might have the knack for a column to submit a pitch. We also encourage people to send in letters to the editor: [email protected] 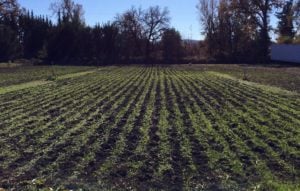 A farm in Potter Valley.

POTTER VALLEY, 2/18/17 — For all the problems we see in society at large, sometimes there are simple fixes that we can make on in our own communities, quickly and easily. Two local farmers, Halle Brady and Julia Dakin thought they could address some of the problems in our local food system by bringing some farm-fresh perspectives to the board of the Ukiah Natural Foods Co-op. They applied, produced quality, no-nonsense candidate statements nobody would disagree with, but were told they would not be allowed to run for the Co-op Board of Directors despite a combined 45+ years of shopping there, because their husbands’ names were listed as “primary members” on their account.

They started a petition at Change.org (sign and share here) to allow them to run that’s got over 280 signatures as of publishing time. They asked the board for clarification and were invited to come to the upcoming board meeting (6 pm at the Co-op Annex which is in same parking lot as the Co-op but on the opposite side of the social services building). I hope all members take advantage of this petition and the meeting as opportunities to voice their support for these two candidates, and the on-going struggle to get more support for our local farmers.

To add insult to injury, a Co-op board-member has publicly shot down their chances of being considered, implied that they and a third candidate were lying, and cited unsubstantiated claims that serve to stifle democratic member control (the second principle of Co-ops internationally). Here’s your chance to stand up for local farmers and their ideas of how to help the Co-op evolve to the collective benefit of our whole community.

The Co-op staff — board-member Cliff Paulin most enthusiastic among them — have cited a number of reasons for potentially disqualifying Halle and Julia, none of which are as cut and dry as they are made out to be. I’ll lay them out here:

Point 1: From a recent Ukiah Daily Journal article: “The state mandates that a single member be designated for each account, and to allow an associate on the account — a ‘cardholder’ — to run for board membership would simply put the organization in violation of explicit California statute, Paulin said.”

Response: State law does dictate one vote per membership, but how membership is defined is flexible. At the Davis Food Co-op, in Davis, for example, membership refers to the shareholder or anyone in their household. The Ukiah Co-op’s definition is particularly rigid, largely unknown to its members — and what’s more, it can be changed. Why can’t the Co-op Board simply put a more  inclusive definition of membership on the ballot? Then, Halle and Julia could be eligible for the Board depending on the member/owners vote regarding the membership issue.

Underlying this concern is a very lawyer-like understanding of the world where reality is based strictly on laws. Ever see anybody driving 66 mph on the freeway? Ever see anybody cross the street outside a crosswalk? How many resources do you think our state government has set aside for the mythical co-op police to swoop in and shut down a store that allows two devoted supporters, who are regularly treated as members, to run for their board? These rules, that were voted on by the Co-op community, could just as easily be changed. This is especially true considering how poorly they’ve been spelled out in the Co-op’s own literature and the outcry they’ve resulted in over the last week from those they are supposed to represent.

Point 2: Julia and Halle are not members of the Co-op and have unfairly claimed they are potentially disqualified based on gender.

Response: For decades, when Halle and Julia went to the Co-op checkout, they were asked if they were members, they said yes, and were never corrected.  Halle even paid full price on a joint membership, making her a “lifetime member,” well before the Co-op changed its membership definition. When the bylaws were changed, her husband’s name was used, and her name was removed as a “primary member” without her knowledge. Julia was told by Co-op staff that if her husband switched their account to her name she would be eligible to run. So of course they made that switch, only to be told later that the staff person was mistaken. The Co-op so far has not owned up to their role in that mistake.

The applicants themselves only say that they were deemed ineligible because their husbands names appeared first on their account, not because of their gender. But many petition signers have commented that this policy sounds sexist or outdated. This is understandable, considering the Co-op’s policy has a similarly diminishing effect on these women as the fact that until 2002 the U.S. Ag Census didn’t consider 2nd operators of farms (60% of whom were women) as worthy of being counted as farmers in their census data (source).

Point 3: In the comments section of the candidate’s petition Paulin says the Co-op’s reason for potentially disqualifying them “is clearly presented in the disclosure documents that all Members receive when they join.”

Response: The Co-op bylaws contain several places where the differentiation between “members,” “primary members”, and “associate cardholders” is far from clearly defined. Some elements are vague, and some contradict Paulin’s interpretation of the current bylaws because they were never updated when the definition of membership was made more restrictive over a decade ago. He acknowledges the lack of clarity in the Co-op’s own literature in the UDJ article. In his comments on their petition site however, he fails to make any mention of this fact and instead sticks with calling the candidates characterizations “inaccurate and unfair to the Co-op.”

Many people who have signed this petition (sign/share it here), would love to hear what other current board members have to say about this issue. So far their collective silence is damaging to democratic member control, especially in light of Paulin’s two dismissive public statements. How about the opinions of the three incumbent board members up for re-election, one of whom will be guaranteed a spot on the board if these two excellent candidates are denied their chance to be put on the ballot?  Given the lack of clarity to this issue, the obvious stake that the three incumbent board members have in the debate, and Paulin’s unjustified attack against the three candidates who authored the petition, it’s only right that the rest of the board come together to reach a solution that does justice to all involved, as well as the general spirit and principles of the Co-op.

One more time (sign/share petition here) and Co-op members please come to the meeting Mon Feb 20th at Co-op Annex (same parking lot as the Co-op but across from Social Services Building).

3 thoughts on “Op-ed: The Ukiah Co-op has stopped two farmers from running for their board, here’s why they should change their policy”