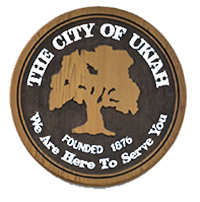 UKIAH 1/30/2017 — At its meeting on Wednesday, February 1, the Ukiah City Council is slated to receive a financial report about the holiday ice rink, schedule final action on the proposed cannabis dispensary ordinance, and hold a hearing on the rezoning of a parcel from residential to commercial usage.

According to a staff report accompanying the agenda, the temporary holiday ice rink generated $16,926 revenue during its first season in Ukiah. For five weeks at the end of 2016 and the beginning of 2017, it was located on School Street in front of Alex Thomas Plaza. Expenses, which included renting the ice rink, a tent, utilities, supplies, and paying staff, came out to $127,827. Ticket sales, field trips, concessions, and sponsor contribution totaled, $144,753. The profit is in a trust fund to be used for next year’s ice rink, or another downtown holiday event, if the council does not authorize the city to host the ice rink for another season.

The Ukiah City Council voted to introduce a proposed medical cannabis dispensary ordinance at its last meeting on January 18. At its upcoming meeting this Wednesday, the council will vote on the matter of altering language to clarify the role of the Ukiah City Planning Commission in waiving distance restrictions for dispensary locations. The city council ad hoc committee, which drafted the proposed ordinance, intended the document to state that the planning commission could waive distance requirements without appealing to another body. However, a phrase from an earlier version remains in the current proposed ordinance, which creates an inconsistency in the document. The council has the option to vote on adopting the proposed ordinance as introduced. This, according to the staff report, would make it unclear if the zoning administrator or the planning commission would be the proper body to conduct public hearings about applications for dispensary use permits. The intent of the city council ad hoc committee is to give that authority, as well as the authority to waive distance requirements, to the planning commission. The city council is the body that would hear appeals of the planning commission’s decisions about permits for medical cannabis dispensaries.

If the council approves the proposed alteration, the item could appear on the agenda for the February 15 meeting, where the council will again have the opportunity to vote on adopting the proposed ordinance.

The city clerk received a letter on the afternoon of January 30 from Dr. Robert Werra, asking the council to ban dispensaries within city limits. Werra wrote that “The claims of medical benefit from this plant are vastly exaggerated and fail the test of both common sense and medical science.”

A public hearing will be held on rezoning a .66 acre parcel at 350 North Orchard, from high density residential R3 to commercial C1 use. The Ukiah City Planning Commission approved the rezoning, which amends the zoning map and the general plan map, at its meeting on January 11.

The parcel, which belongs to Daniel Thomas of Pear Orchard Associates, is currently being used for overflow parking by Home Depot. According to an agenda summary report prepared by Interim Planning and Community Development Director Kevin Thompson, “residential uses on this parcel are incompatible with the surrounding uses.” The parcel is also among those that could be used to meet the city’s housing needs, as it could accommodate 17 to 18 housing units.

The rezoning does not mean that the property cannot be used for high-density purposes. The rezoning changes the status of uses that are allowed by right, and those that require a permit.

The council is also scheduled to receive a report on the strategic plan and city operations, and vote on authorizing the city manager to amend the agreement between the city and the Ukiah Valley Fire Protection District. The two entities have an interim agreement to provide joint services as they explore the possibility of merging.