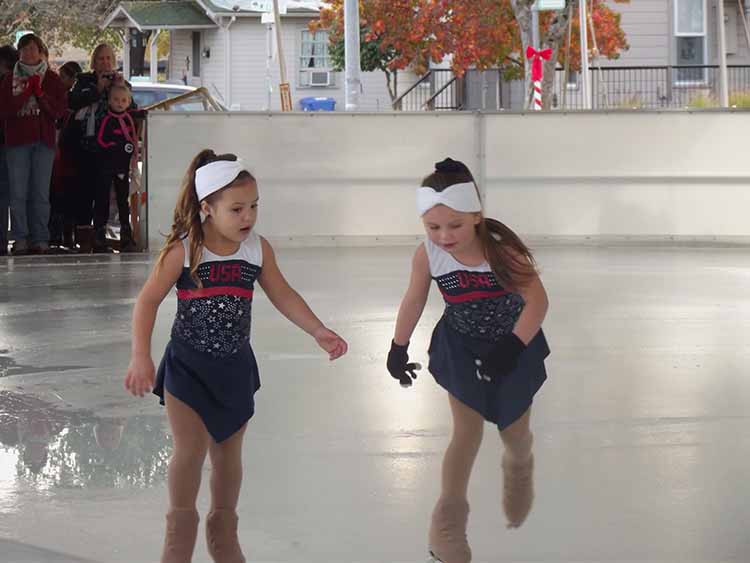 Performers from the Ukiah Skating Academy. 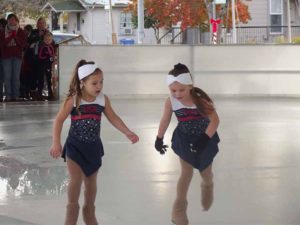 Performers from the Ukiah Skating Academy.

UKIAH 12/7/2016 — On Sunday afternoon, the people of Ukiah gathered in the street to eat free food, have their pictures taken with silly props, and throw snowballs at one another. The ice rink opened December 4 on School Street behind Alex Thomas Plaza, and the Ukiah Valley Medical Center was having its 60th birthday party there. 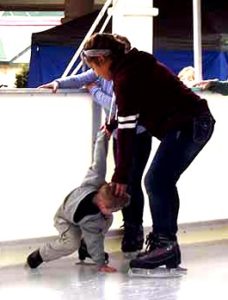 The first skaters on the ice.

was up for one day only. He was making balloon creations for kids and keeping up a steady stream of chatter. It may have been the warmth radiating from the heat lamps, but his pointy little ears appeared to be impervious to the cold.

The Funky Dozen were on hand at the back of the tent to blend a concert atmosphere with the children’s birthday party vibe. Indeed, many of the visitors, like Marcus Caldwell, said their ice skating experience was limited to “a few birthday parties” at Snoopy’s Home Ice, the ice skating rink in Santa Rosa. Caldwell’s one-year-old daughter Leila was wearing her ice skates and did not appear overly impressed.

Some of the older children were enthused about a new athletic challenge. Thirteen-year-old Cassie Tate, who attends the Ukiah Skating Academy and is part of the roller skating team, said her team had practiced for about 45 minutes on the ice that day, to prepare for a performance later in the afternoon. “I really like it,” she said, explaining that the jumps and spins on the ice are similar, but more like rollerblading than quad skating, which is what the team uses in its competitions. 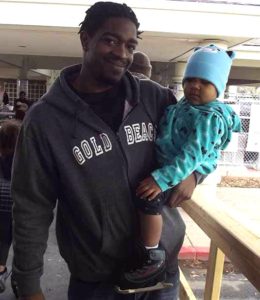 Marcus Caldwell with his one year old daughter Leila, and her tiny skates.

Roller skating is big in Ukiah, apparently. Carrie Skaggs, who took a first place in the roller skating national championships when she was 12 and again when she was 14, was helping seven-year-old Aidan into his skates and straightening his Pikachu hat before they headed onto the ice. “I used to be able to do jumps,” she said, before hitting the ice to see if she still had what it takes.

Other children were excited about the pile of ice that accumulated just outside the rink, after the ice resurfacer finished smoothing out the ice and dumped a modest scoop of frozen matter in the gutter. One member of the crowd was heard to refer to this 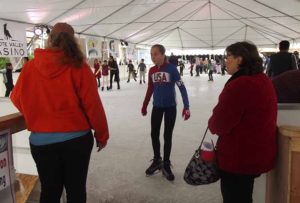 Something about the snow-like substance brought out juvenile tendencies in some grown people. As the children converged on the pile of ice, a gentleman with a graying beard darted into the flock and grabbed a handful of the frozen shavings. He quickly patted together a snowball and lobbed it gently at a well-accessorized woman who was keeping her good shoes at a safe distance from the melee. A small boy who bore a distinct resemblance to the woman immediately avenged her, and the man with the beard fled, laughing, bits of snow clinging to his jacket. 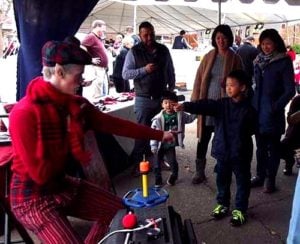 Philip the Elf jokes around with some young visitors.

“It’s our thank-you to the community as part of our 60th anniversary,” said Gwen Matthews, CEO of Ukiah Valley Medical Center, which hosted the first three days of the ice rink. The City of Ukiah will be responsible for the rink until it closes on January 8. The rink was approved at the Ukiah City Council meeting on September 7, amid hopes that it will draw visitors to the downtown area. This is the first time Ukiah has hosted a holiday ice rink. Matthews said the project was “the brainchild” of UVMC Marketing and Communications Manager Erica Tyner, who is the former Executive Director of the Greater Ukiah Chamber of Commerce. “It’s going to be a great day,” Tyner predicted, as the band began to play and children wobbled out onto the ice. 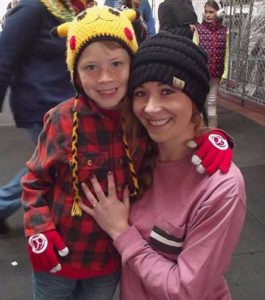 Carrie and Aidan Skaggs prepare to skate, with a pikachu hat.