There are boulders in the southbound slow lane of 101 on the Ridgewood grade, south of the turnoff to the Golden Rule.

The Navarro Ridge Road is open, according to a report by MendocinoSportsPlus. Check out details and photos.

There was a collision on the 101 southbound offramp at Gobbi Street in Ukiah. Vehicles involved were a red Ford Mustang and a brown or beige Sequoia. An ambulance was en route as of 1:06pm. By 1:31pm, the road was clear.

At noon, four goats were running down Main street past the junior and elementary schools in Potter Valley.

At Fish Rock Road in Gualala, mile marker 16.25, a tree is down, partially blocking the roadway.

As of 7:30am, an ambulance was en route to a vehicle rolled over on the 101, just south of Longvale.

Babcock Road in Ukiah, was re-opened a little after 9am. 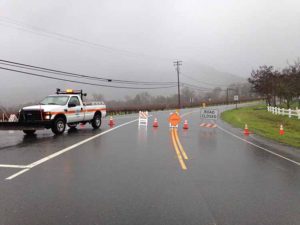 In Hopland, Hwy 175 to Old River Road is closed due to flooding.