MENDOCINO Co., 1/8/17 — We’re updating with with new information all day. You can follow information from us on Twitter at twitter.com/TheMendoVoice, where we’ll repost updates from the agencies involved in managing the storm under #CAstorm.
Send us reports and photos from your area and we’ll include them in our updates!

7pm: CA Route 128 is officially closed from mile marker 1 through mile marker 11, where the road meets the mouth of the Navarro River. There is also a closure listed at the Philo Greenwood road from CHP.

Rt. 174 near the intersection with 101 is closed due to flooding.

Near 7000 people have lost power in the county, mostly on the Coast, but there is an outage in Redwood Valley, and sporadic outages across the county.

As of 7pm, there are trees in the northbound lanes and part of the southbound lanes on Highway 101 south of Leggett, with Caltrans on the way. There was also a small, no injury accident, near Confusion Hill on the 101, might be a small road hazard, CHP is clearing it.

Scroll down for more updates, here’s a video of the Eel River at Hearst Rd.:

And if you don’t believe words, believe your eyes, Mendocino Sports Plus has a video of the 128 closure:

Flooding of low-lying areas and small streams is expected to continue throughout the day, as well as gusty winds, particularly at high elevations. The National Weather Service is predicting possible rainfall amounts from .2 – .4 inches an hour in our region for the next several hours. Current forecasts from NWS for your location are available here.

You can check the current floodstage of rivers around the state at this NWS webpage. You can also see if your home is in a hazard zone at this state webpage.

Flooding has taken place in Sonoma, along the 101 this morning. The 101 was one point closed and there is flooding in Petaluma. If you are going south, there is a flash flood warning in effect for the Santa Rosa and Rohnert Park area until 1:45pm.

The Navarro is already near 20′, and police have staged to close the road, it seems that closure is imminent.

If you don’t need to go anywhere, stay home. Roads all around the area are seeing downed power lines, fallen trees, and flooding. We’ve listed current info below and you can check the CalTrans. The CHP is urging people take caution, drive slowly, and not to attempt to drive through flooded areas. Motorists have already been stranded and required rescue this morning from the 101 in Sonoma County. The NWS reminds people not to drive around barricades, and to turn around if a road is closed.

CHP reminds you to “Please carry chains, warm clothing, extra food and water, check your tires and windshield wipers. Please do not attempt to cross roadways with standing water, just 2 feet of water can sweep your car off of the roadway. Know where you are going and what the road conditions are prior to traveling.”

Around Mendocino there are numerous flooded roads, downed power lines, and fallen tree hazards. As of 11:45am there are hazards in the roadway at Little River Airport Road, Mountain View Road is blocked by a downed tree at mile marker 9 with crews on the way, trees downed at Little Lake Road and Merril Lane in Mendocino. Incidents are being updated on the CHP incident page as they come in.

Highway 1: still open but flooding is expected of the Navarro between Sunday afternoon and Monday morning. Phil Fribsie, Jr., Caltrans District 1 Public Information Officer, said on Facebok at 11:30am that “The National Weather Service out of Eureka has issued a flood warning for the Navarro River Sunday afternoon through Monday morning. Sometimes flooding of the Navarro coincides with the flooding of the Garcia River, so residents should prepare accordingly.”

Hwy 101: There are reports that Hwy. 101 is blocked at Richardson Grove, by several small downed trees.

Hwy. 175: This one is a little tricky. The 175 is open from Lake County, to two way traffic. However the highway is closed at the junction with the 101. There is a downed tree between Hopland and Lake County, the incident occurred “about one mile north of Mount Hannah Lodge. AT&T is en route, but we don’t know when the road will reopen yet,” says Caltrans’ Facebook page. Bell Hill Road at Adobe Creek Drive is closed due to flooding, as is SR 29 at Hartman Road.

Highway 128: open but as of 12pm there are hazards in the road between Mile Marker 2 and Mile Marker 12, in both the eastbound and westbound lanes. Caltrans crews are on the way.

Highway 20: In Mendocino, there is a slide reported near mile marker 20 just north of Jackson State Demonstration Forest in the eastbound lane, Caltrans has assigned a unit on its way as of 12:30pm. East of Ukiah, in Lake Co., there are reports of a tree in the westbound lane near Glenhaven, Caltrans crews are on the scene as of 1:15pm.

Flooding at 540 Orchard Ave. in Ukiah.

Flooding at Fish Rock Road 6 miles from Highway 128 in Ukiah, a tree is down “larger than a telephone pole.”

CA Route 254 (Avenue of the Giants): Closed south of Barkdull Rd. due to flooding.

Highway 299 near the Humboldt/Trinity border is now re-opened, it had been closed due to a slide, according to Caltrans District 1’s Facebook page.

Here’s a motorist being rescued in Lake County at about 2pm:

POWER: You can check current PG&E outages and report an outage here. The page updates every 15 minutes and includes information about the cause of the outage and when crews are expected to arrive.

As of about 10am this morning, there are about 4,500 people in the county without power, according to the Sheriff:

Several thousand people have lost power on the coast, in the towns of Fort Bragg, Elk/Albion and Mendocino and near those areas. People are also without power in Manchester/Point Arena, Sea Ranch, and north of Gualala.

Boonville and Philo also have power outages of less than 50 people.

As of 10:45 am, 751 customers in Redwood Valley are without power with no estimated time of return. 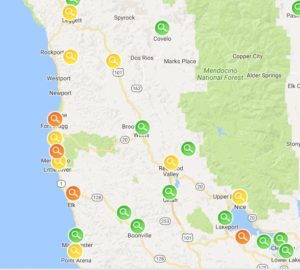 Several hundred households have also lost power in the Laytonville area, particularly west around Branscomb Road. Smaller outages are being reported in the north of the county, in the Willits area, in Covelo, and in Ukiah. Almost 400 people are without power in the Leggett area.

Further north the Garberville area is experiencing outages to hundreds of households as well.

The Bay Area and the Sierra foothills are also experiencing power outages.

If you need another warning to be careful, here’s a video from a stranded motorist in Sonoma this morning:

If you needed another reminder NOT to drive in flooded areas, there’s this from Petaluma today. #CAstorm (Video from @demianbulwa) pic.twitter.com/HZOjyY96F8