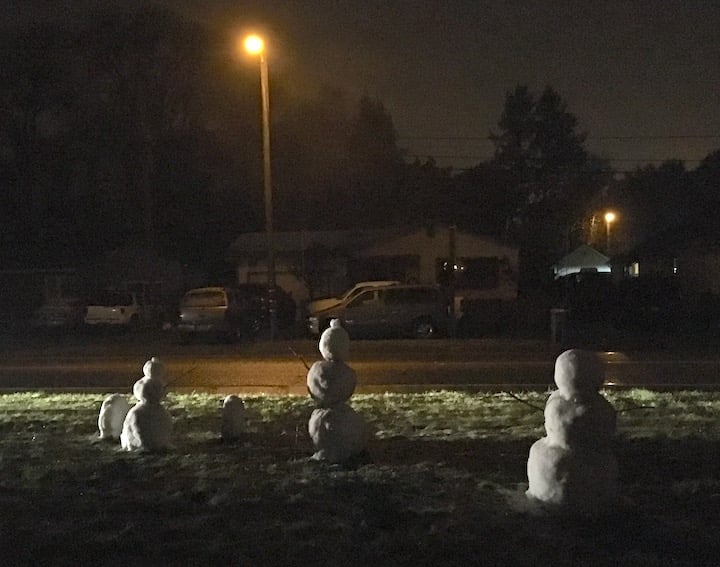 A family of snowmen under the stars on Highway 20 just west of Highway 101 in Willits.

Highway 1: as of 11:30pm the road has now re-opened with one lane, with traffic controls.

As of 11pm, there is a currently a road closure on Highway 1 between Highway 101 and the coast, a little more than a mile past Rockport, due to a debris and mudslides in the road. The road has been closed since about 8pm. However, as of 10:56 pm the California Highway Patrol incident page is reporting that one lane may open shortly with assistance from Caltransin clearing the road. Kym Kemp at Redheaded Blackbelt also has a report on the closure. We’ll update as more information becomes available.

Highway 20: Although some readers are reporting that Highway 20 west from Willits to Fort Bragg is closed, but there is currently no official information available from Caltrans or the CHP to confirm that. The Mendocino Voice drove about 5 miles west of Willits, with some icy conditions but largely clear roads, where we then encountered  a Caltrans truck spreading sand along the pavement. According to that Caltrans driver, Highway 20 remains open to Fort Bragg, who also said he had not given any information to the contrary and planned to continue sanding the road until the sand ran out. We have not been able to confirm reports of a closure, but want to remind everyone to be very careful as even open roads are still icy and slides continue to be possible.

Much of the county remains under a winter weather advisory until at least 9am on January 3 and in some places through January 4. We’ll update conditions as information becomes available.

See our previous update on road conditions here, with information about how to check for current updates in your area.