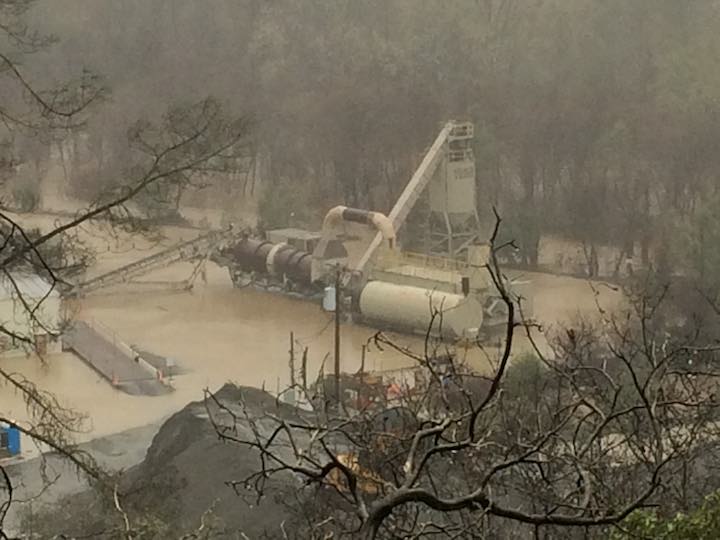 A photo of Grist Creek during the January rainstorms.

MENDOCINO Co., 1/18/17 — After more than a year of negotiations between the now-closed Grist Creek Asphalt plant and the Mendocino Air Quality Management District over public the plant’s public health and emissions violations, the Mendo Air District is asking for help from the state to ensure plant owners comply with air quality rules. On January 5, they officially requested aid from the California Air Resources Board, in the effort to force the owners of the plant to follow all county and state regulations and address the required equipment and operation improvements.

The plant has been substantially censured and fined over violations that occurred during the its initial months in operation in the fall of 2015. On January 5, Mendo Air District Senior Air Quality Specialist Barbara Moed requested assistance from the California Air Resources Board (CARB) in settling the violations, noting the agency had been engaged in negotiations with the plant since November 2015. Moed has since replaced Bob Scaglione as the newly appointed Air Pollution Control Officer, heading the agency.

The asphalt plant has been shuttered since April 2016. Prior to its closure, the plant was found to have ongoing violations, and a lawsuit from the Mendo Air District alleged a pattern of noncompliance and an apparent unwillingness to negotiate with the district. During its first three months in operation, the plant received at least three separate violation notices totaling over $173,000 in fines, including multiple violations of state law, permit conditions, and district regulations. The Mendo Air District also determined the plant to be a public nuisance — due to repeated public health complaints from the public — and fined the plant for operating unpermitted equipment, for ongoing emissions violations, and failing to follow best practices required by its permits.

The California Air Resources Board, a statewide agency which conducted an independent investigation into the plant in November, 2015, also concluded that the plant was in serious violation of both county and state regulations and causing impacts to public health and recommended the county pursue regulatory compliance.

While the plant was in operation, many its neighbors also testified before the Mendo Air Board in vivid detail regarding ongoing impacts from asphalt emissions and lack of environmental and public review of the plant’s permits, including possible contamination of the nearby Outlet Creek. An environmental group, Friends of Outlet Creek, has filed multiple lawsuits concerning the plant’s authorization to operate and requesting its environmental impacts be evaluated.

So far, the plant’s owners Mercer-Fraser and Covelo resident Brian Hurt of Grist Creek Aggregates have refused to pay the fines or agree to equipment upgrades and additional monitoring and oversight as requested by the Mendo Air District, at one point “walking out” of negotiations as noted in the district’s lawsuit.

Scaglione, the Air Pollution Control Officer who left the agency on December 31, made a final offer on December 29, which was rejected.

In an October letter sent to the plant’s attorney seeking a new permit, Scaglione noted that owners demonstrated a “recurring pattern of noncompliance” and a “significant risk” to public health, safety, and the environment. Scaglione told The Mendocino Voice in mid-December that Mercer-Fraser had retained a consulting firm, Sierra Research, to assist with negotiations over changes to plant operating equipment, and that the district was requiring additional employee education about permitting requirements beyond what would normally be requested.

Scaglione has since retired and been replaced by Moed, who requested assistance from CARB prior to her appointment to head Mendo’s Air District by the Board of Supervisors on January 11. Her email to the state agency asks for help in “the investigation and prosecution” of the violations, citing the previous inspection by CARB, the ongoing negotiations, and the rejection of the MCAQMD/Scaglione’s final offer on December 29. Moed refused to offer further comment on the letter to the Air Board when contacted on January 12 by The Mendocino Voice. 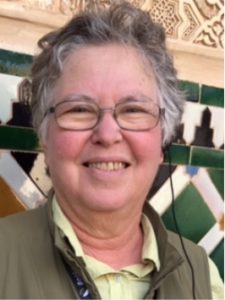 According to a press release issued by the county’s Executive Office, “Moed brings over 30 years of experience to her new role having worked at a national laboratory and as a consultant to commercial and industrial companies…She has a Master’s degree in Geology[sic] from Rice University, and a Bachelor’s degree in Marine Science/Geology from Southampton College.” In the announcement of her promoting, Moed states “I look forward to continuing my work with our community, and furthering the mission of the Air District by protecting and managing air quality, an essential public resource upon which the health of the residents of Mendocino County depends.”

Neighbors of the plant have been concerned about contamination of the adjacent Outlet Creek for some time now. During recent storms, several neighbors documented possible flooding at the site. Here’s our coverage about how the plant fared during recent storms.