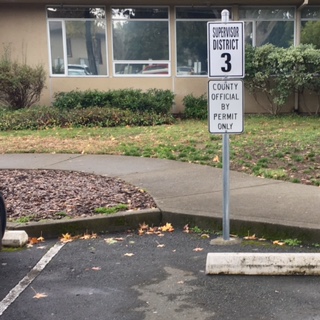 WILLITS, CA 1/26/17 — In the race to fill the now vacant Third District supervisor’s seat it would be useful to know who has thrown their hat in the ring, how long it will take to fill the seat, what the requirements are, what the governor’s preferences are, or really any details at all. But unlike elections, appointments are fundamentally opaque — Governor Jerry Brown is the only one empowered to make the appointment, and legally, he doesn’t have to talk about it.

Last week the governor’s office committed to this lack of transparency by denying a public records request from The Mendocino Voice to provide a complete list of applicants to the position of Mendocino County Third District Supervisor. Citing the Government Code of California, section 6254, subsection I, which protects correspondence between the governor and his employees from public disclosure, and backing it up with the case of California First Amendment Coalition v. Superior Court, the governor’s Deputy Legal Affairs Secretary Daniel Calabretta affirmed that they are under no legal obligation to divulge information about the applications. A follow-up email, asking if just a list of the names could be released, was similarly rebuffed, with their response stating, “The names of any individuals who have applied or are being considered are exempt from disclosure for the same reasons specified in our letter to you.”

We urge Governor Brown to reconsider — to release a list of applicants, to give Mendocino County a timeline, and to provide some indication of his preferences.

As of publication we know of six applicants:  Georgeanne Croskey, Ellen Drell, John Haschak, Holly Madrigal, Johnny Pinches, Clay Romero. But we cannot say that this is an exhaustive list, it is only the list of people who come forward. These are all people of good-faith, who are respected in the community, so we believe them when they say that they have applied, but because of the blackout from the governor’s office we do not actually know if their applications have been received, or accepted, or if they are being considered. And we do not know if there are other dark horse or secret applicants who the people of Mendocino County would have no opportunity to speak up in favor of, or against.

Beyond this most basic question of “who,” there are the equally important matters of when the appointment will be made, and on the basis of what criteria. We know that county staff and other interested parties have asked the governor’s office for a timeline, and that they have been denied. The appointment could take anywhere from two to six months, or longer.

In recent days the question of criteria has come to the fore. The Mendocino County Board of Supervisors endorsed former supervisor John Pinches for the seat at Tuesday’s meeting. In that meeting they specifically stated that they thought it unlikely that Pinches would run for the office in 2018, and that this was both a plus, and a reason for believing the governor might select him. Yet Pinches himself, in an interview with us, did not definitively state that he would not run, he left it very open ended.

So the question becomes, what does the governor want? Does he want a placeholder or an active politician, or does he not care? The people of Mendocino have a right to know what the criteria are, and who they should be backing with their calls and letters to elected officials.

We do not deny the governor’s legal claim to keep this information from the public, but we implore him to do otherwise. The Third District has gone without representation since September, almost five months. With Supervisor Dan Hamburg recusing himself from cannabis matters, the board of supervisors must make all cannabis related decisions with only three members, forcing unanimous votes, and effectively limiting the representation of all people in the county.

Especially given the extremely important and often divisive issues that are currently coming before the board, we find this situation unacceptable.

The secrecy over the absence and resignation of Mr. Woodhouse, and the secrecy surrounding his replacement, have created one long lacuna of democracy for the people of the Third District. The governor should not continue this pattern, but instead act with greater transparency and swiftness precisely because of the murkiness of the past four months.

So again, we urge Governor Brown to make the appointment quickly and with as much transparency and openness as is possible — to release a list of all applicants, to given us an idea of how long it will take, and to make some public statement about what his preferences are.

One more time: You can call Governor Jerry Brown’s office at (916) 445-2841, fax: (916) 558-3160; or email him here. People familiar this these things say that calling is the most effective way to make your voice heard with elected representatives. But if you’re still into snailmail: Governor Jerry Brown c/o State Capitol, Suite 1173 Sacramento, CA 95814

The following is the text of the letter we received from the governor’s legal unit.

This letter responds to your email received January 14, 2017, requesting copies of documents pertaining to applicants and appointment of the Third District Supervisor for the County of Mendocino.