The site of the soon to open emergency homeless shelter.

UKIAH — An emergency winter homeless shelter, to be located at 1045 South State Street in Ukiah, should be open by Thanksgiving, according to Ukiah City Interim Planning and Community Development Director Kevin Thompson and Judy Popowski, president of the board of Mendocino County AIDS and Viral Hepatitis Network (MCAVHN). Thompson added that he anticipates the shelter will be open until mid-March, based on recommendations from city staff. 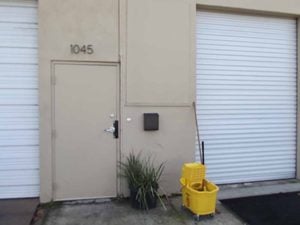 The site of the soon to open emergency homeless shelter.

This year’s shelter will differ in important ways from last year’s emergency shelter, which opened on November 25 at 943 Mazzoni Street, in the homeless shelter overlay zone. In an effort to comply with California SB 2, which was signed into law in 2007, the City of Ukiah established a zone where emergency shelter would be allowed by right, without a permit, at the northeast end of town — deemed the “overlay zone.” But this year there is no property available for a homeless shelter in the overlay zone. Faced with this roadblock the Homeless Services Action Group (HSAG), which incorporated as a non-profit on November 1, found themselves forced to obtain a specific use permit to establish the shelter at the building on State St.

The Ukiah Valley Medical Center will act as fiscal sponsor this year, a role previously assumed by MCAVHN. The hospital donated $10,000 to the Mazzoni St. operation in 2015, and has been conducting a weekly street medicine program at Plowshares, a non-profit organization that provides free meals twice a day, five days a week, at 1346 S. State St. Doctors from UVMC also provided medical care at Mazzoni Street, and in the tent encampment on Lake Mendocino where many people moved after the shelter closed.

In addition to being closer to Plowshares than Mazzoni, the building at 1045 S. State is right next to a bus stop. It is located behind Bio Dynamic Iron, a motorcycle repair shop, and has large vacant lots on either side of it.

Thompson said legal notice had been posted, and that property owners within 300 feet of the site had also been notified of the plan. He said city staff had recommended that the use permit be issued, based on certain conditions, including an agreement that the non profit formerly known as HSAG adhere to a shelter management plan. The permit application will come before the Ukiah City Planning Commission at its meeting on November 9.