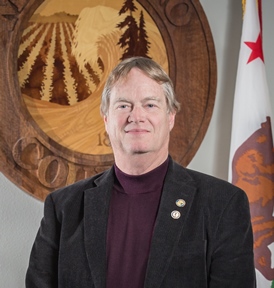 UKIAH — Third District Supervisor Tom Woodhouse continued his streak of absences, missing his fourth consecutive Board of Supervisors’ meeting today, Oct. 4. It was also announced at the meeting that he will be taking a leave of absence through at least November 3. No explanation for his leave was offered.

The last meeting of the Board of Supervisors he attended was August 30, 2016. Since then there have been two regularly scheduled meetings which he missed, and a special joint session in Fort Bragg with the Fort Bragg city council, which he also missed. There are two meetings scheduled before Nov. 3, one on October 18, and one on Nov. 1. There are also various committee meetings between now and then. If his leave extends until then he will have missed six meetings.

This absence comes at contentious time for the board, during which the cannabis regulation ordinance and measures have been hotly debated. His absence has effectively left District 3 without representation during this time. Also, with Supervisor Dan Hamburg recusing himself from any cannabis vote, this leaves only three members of the Board of Supervisors to deliberate on this very important issue. With only three members voting, on a five member board, all recent votes on this issue have had to be unanimous, hindering efficient deliberation.

Asked for any information about the reasons for his absence both Mendocino County Counsel Katharine Elliott and CEO Carmel Angelo said they had no additional information. It is unknown if there is any penalty for this length of absence. According to Mendocino County Human Resources, Woodhouse’s total compensation for 2015 was $111,774, with $61,200 as base pay and the rest in benefits.

Attempts were made to contact Woodhouse by both phone and email today, Oct. 4, with no response. Though he’s not been seen at the meetings, he has been seen in front of his office in Willits in the past two week, since after his absences began.

We went and knocked on the door of Supervisor Woodhouse’s realty office on North St. in Willits. The lights were on but no one came to the door.