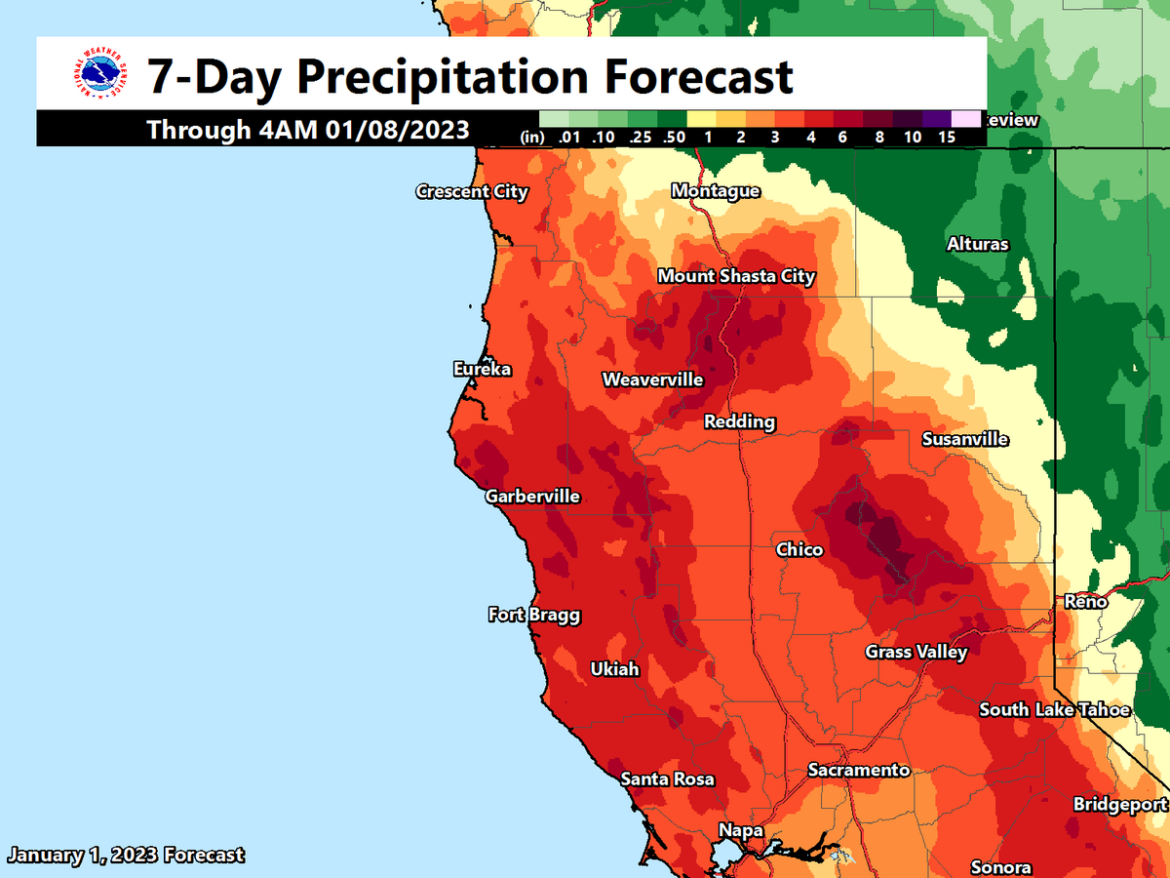 Update, 4 p.m. — The National Weather Service (NWS) has now issued a Flood Watch for multiple Mendocino County rivers, as well as a High Wind Watch for portions of the county.

The Flood Watch is in effect from Wednesday at 6 p.m. through Friday at 4:30a.m., and particularly applies to the Russian River at Hopland, the Navarro River at Navarro, and the southern portion of the August Complex Fire burn scar. NWS Eureka advised that residents should anticipate flooding along roadways, debris, and downed trees.

Downed trees are made even more likely by forecasted high winds. NWS Eureka’s High Wind Watch for portions of Mendocino County will run from Wednesday morning to Thursday morning

“Damaging winds could blow down trees and power lines,” the county advised in a news release. “Widespread power outages are possible.”

The county advised residents not to touch downed power lines, but to report them immediately by calling 911 and PG&E at 1-800-743-5002. PG&E continues to restore all power outages as they occur, and the latest outages and preparedness information can be found online.

Residents should also keep an eye out for signs of debris flow, Mendocino County’s news release cautioned. Listen and watch for rushing water, mud, or unusual sounds like trees cracking, boulders knocking together, or a faint rumbling. Debris flows should be reported by calling 911.

More info on the weather we can expect this week below.

Update 1/3/23, 10:30 a.m. — The National Weather Service (NWS) has issued a Flood Watch in Mendocino County from late Wednesday night to around 4 p.m. Thursday afternoon. The Navarro River is forecasted to flood its banks, with the potential to reach its flood stage of 23 feet early Thursday morning.

When the Navarro River reaches 30 feet, water flows over the south bank of the river about one mile east of Highway 1 and begins to flood several homes in the area, according to NWS data.

“Expect closure of Highway 128,” the weather service wrote. “Motorists should use alternate routes.”

Further, NWS Eureka has bolstered some of its wind predictions.

“Peak wind gusts on exposed ridges will likely exceed 70 mph and could exceed 80 mph,” the weather service advised Tuesday. “This is the type of storm where if you can alter your plans to not travel on Wednesday or Thursday it would be advised to do so.”

We’ll keep you updated as the storm develops — more details and resources are included below.

Update 4:30 p.m. — A steady rain has been falling across the county for much of the day, and we’ve received a number of reader reports of snow falling in Laytonville, Brooktrails, and and other northern inland locations, as well as downed trees in the roads — take caution out there if you are on the roads this week!

In addition, more than one thousand customers are currently without power in the Fort Bragg area — there is no current time of restoration according to PG&E’s outage map, but crews are on the scene.

We’ve included a list of useful links and agency websites at the bottom of this article to give you the most current conditions for your area.

MENDOCINO Co, CA, 1/2/23 — A trifecta of snow, rains, and high winds is expected to usher in 2023 across Mendocino County this week, with another atmospheric river expected to bring more flooding on the heels of a week marked by high rainfall.

Snow is possible Monday and early this week in high-elevation zones of northeastern Mendocino County, according to the forecast from the National Weather Service (NWS) in Eureka. In Laytonville, snow showers are forecasted through Tuesday for elevations of 3,000 feet, with the highest accumulation (between 1 and 3 inches) expected Monday. Snow showers with little accumulation are also possible in Covelo over the coming days.

Rain totals of between 3 and 6 inches are also forecasted across Mendocino County this week, according to a 7-day precipitation forecast shared by NWS Eureka on Monday morning. Light storms should move through the area Monday and Tuesday, but the heaviest rainfall is expected on Wednesday.

“Most of Mendocino County is probably going to see similar rain amounts to what they saw last week, if not a little bit more,” James White, a meteorologist at NWS Eureka, told The Mendocino Voice.

He said many small creeks are expected to flood on Wednesday into Thursday, with the Russian River forecasted to pass flood stage and crest at around 16.5 feet.

“The continued rain will bring more flooding potential, especially south of Cape Mendocino,” NWS Eureka wrote. “The Russian River at Hopland, the Navarro River, and the Garcia River all have the potential to flood again Wednesday night into Thursday.”

White said the Navarro River is not currently projected to flood but that early predictions there tend to be on the lower end; Overall, he said we should expect “probably pretty similar road flooding to what we saw last week.” Flood stage predictions for local rivers can be viewed on NWS’ Advanced Hydrologic Prediction Service.

These latest storms come on the heels of intense weekend flooding, which led to closures on major highways in our area including Highway 1 and State Routes 128, 162, 175, and 271. That recent surge won’t necessarily make flooding more likely, White said, as the current soil moisture is similar to the levels we saw last week. But he also explained that hydrologic impacts can often have cumulative effects, such as reducing the strength of trees.

“This event does look much windier,” he added, explaining that — especially in exposed coastal areas — wind gusts of between 50 and 60 miles per hour are possible.

Meteorologists also predict storm force conditions and large seas off the coast on Wednesday and Thursday.

“The ocean will be particularly hazardous and not safe for any mariners Wednesday into Thursday,” NWS Eureka reported. White said models are forecasting potential swells of up to 30 feet, with Thursday into Friday bringing the most dangerous high surf.