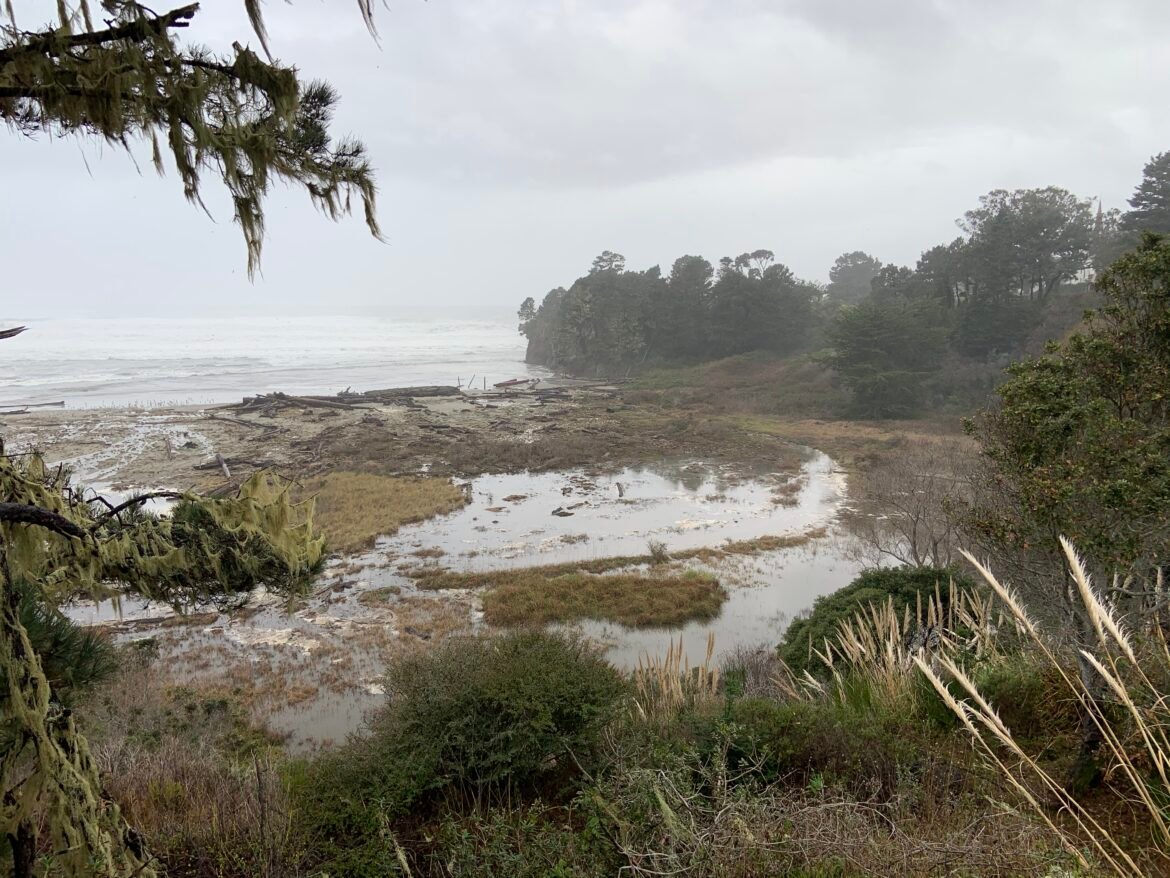 MENDOCINO Co, CA, 1/5/23 — If ever there was a day to avoid the beach in Mendocino County, this Thursday is the one. On the heels of another atmospheric river storm sweeping through California Wednesday, Mendocino and the North Coast now face unusually high surf and large swells.

The National Weather Service (NWS) in Eureka has issued a warning of very high surf, with swells of 30 feet or more possible, through this evening for the Mendocino, Humboldt and Del Norte county coasts. There is a hazardous seas warning and gale warning in effect through Friday morning, and a high surf warning in effect until 6 a.m. on Friday — more details here.

A buoy north of Point Arena recorded wave heights of 33.1 feet just after 6 a.m. Thursday morning, a few hours ahead of high tide. These waves packed a big punch: around 8 a.m. up the coast, at Van Damme State Beach in Little River, waves repeatedly washed all the way across the parking lot to Highway 1.

Van Damme State Park is closed (as is Noyo Beach in Fort Bragg), but this portion of Highway 1 has remained open.

Mendocino’s Big River Beach was already littered with large trees and debris from the King Tides at the end of December; on Thursday morning, a whole lot of water had joined the party.

Unsurprisingly, boats were not leaving Fort Bragg’s Noyo Harbor today as the harbor hunkered down to ride out these large swells that also rippled through the Noyo River. All was going alright so far, Harbormaster Anna Neumann said around 9:30 a.m. — though she explained that receding high waters also bring potential challenges to infrastructure.

“As the river starts pulling out the other direction, we’re going to lose seven feet of water,” she said. “So it’s going to be a lot of water moving in the opposite direction, and bringing whatever logs that are upstream, downstream.”

Noyo Beach, beneath the Noyo River Bridge, has been closed since Wednesday. The harbor’s head of maintenance ushered several wave-onlookers out of the closed parking lot during high tide, advising that some large waves had been reaching the restricted area.

Want to share storm photos of your own? Email [email protected] with photo credit.