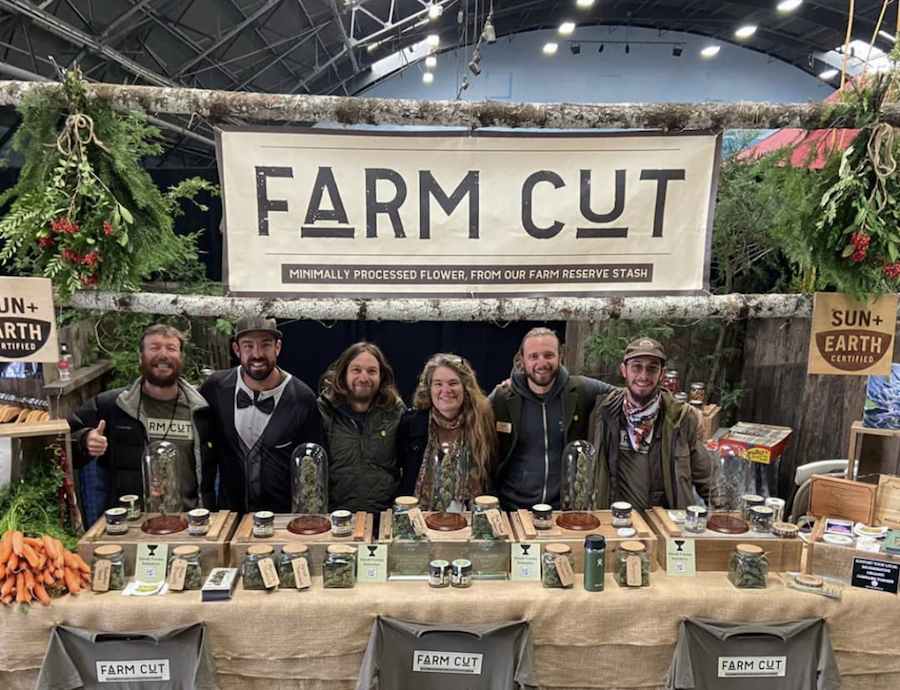 Mendocino cultivators ready for the big event with their cannabis , displayed in jars, before the start of the Harvest Ball in 2021:photo provided by Happy Day Farms

Feeling gratitude for sunshine and good health! After a long and hectic season we’re getting the farm put to bed, cleaning up the damage from the wild pigs and sowing cover crops. Today we’ll finish the fencing projects that we hope will prevent future porcine incursions; things are looking up.

I’ve been cutting t-posts into chunks with an angle grinder I borrowed from my uncle, and we’ve been using the mechanical pounder to drive the short posts into the gaps between the existing fence posts. After wiring the fence to the posts, we drive them down a few more inches to stake the fence tight to the ground. Big gratitude to retired County Supervisor John McCowen for the gift of a hundred or so t-posts that has made the difference for us in the project; without them we’d be having a hard time coming up with money to buy new ones.

Cleaning up the pig-damaged terraces at Pops’ has been hanging over me for weeks. I’ve been overwhelmed by the remnants of my beautiful fall crops, the jumbled irrigation and insect netting, the soil moved downhill and the eroded terrace banks. Though I had dreaded the work, it ended up not being as bad as I feared.

We untangled the irrigation and dug out the t-posts that held the insect netting down. I was glad to find that most of the netting was salvageable (it looked like total decimation at first), and after a couple hours of shoveling and raking the terraces are in decent shape. There is still going to be some spring work to rebuild, but for now it felt good to sow cover crops and put the garden to bed for the winter.

Coming off the finale of the cannabis year with the Emerald Cup Harvest Ball last weekend, I had high hopes for sunshine and a strong finish before the holidays. Last year I got so sick after the Cup that I was laid low through the rest of December, and I was afraid of a similar occurrence this year. I had a great time at the Harvest Ball getting to see everyone and share the fruits of our collective labors.

The event was much smaller this year, which was comforting because it wasn’t so intense and we had time to catch up with old friends.  I was careful about my health, going to bed early and making sure to take my vitamins and eat well and hydrate during the event, and I came out of it feeling good and ready to knock out some projects.

We have two dominant methods of garden breakdown on the farm.  The basic one is to remove crop detritus and sow cover crops to build soil, sop up leftover nutrients and prevent erosion. This method is for beds that will be planted later in the spring, and especially for newer beds that still need the soil-building support of a good cover crop.

For beds that have gotten choked with weeds, and/or that we want to put into production in late winter, we use a different methodology. I use the BCS with the flail mower to cut the plant residues down to ground level, we add a healthy layer of compost and then put down cardboard over the top. In some areas we also use a layer of old dep tarp to really make sure that no light makes it through so we can suppress some of the more durable weeds.

The soil life will break down the crop residues and the worms and other biota will love the compost layer. The worms also like to eat the cardboard, and the activity underneath is incredible to see when we get to the point of planting. For perennial beds we’ll pull the cardboard off into the pathway to serve as further weed suppression, letting the asparagus and flower crops get a running start without the competition of winter-grown weeds.

For some of the annual crop plantings, we’ll leave the cardboard on top, add more compost and punch through to plant spring brassica. These plants will grow large and will shade out weeds once they’ve reached full growth, but the weed suppression jumpstart makes a big difference. I have to watch out for gophers, but we trap with decent success and feel that it’s worth the trade-off for the benefits of the cardboard which include helping the beds to stay more moist when we get the extended warm, dry periods that have been so frequent in late winter and early spring these last few years..

It feels good to get some cleanup done and start to let go of some of the feelings of impotent rage that the pigs left me with. Even so, they are still damaging the ecosystem as a whole, and I have high hopes for more hunting and cooperation with folks who are interested in hunting. As we head into the holidays, I am glad for the reflections on the year gone by, and am looking forward to working some jigsaw puzzles, eating well and enjoying the company of family and friends.  As always, much love and great success to you on your journey!