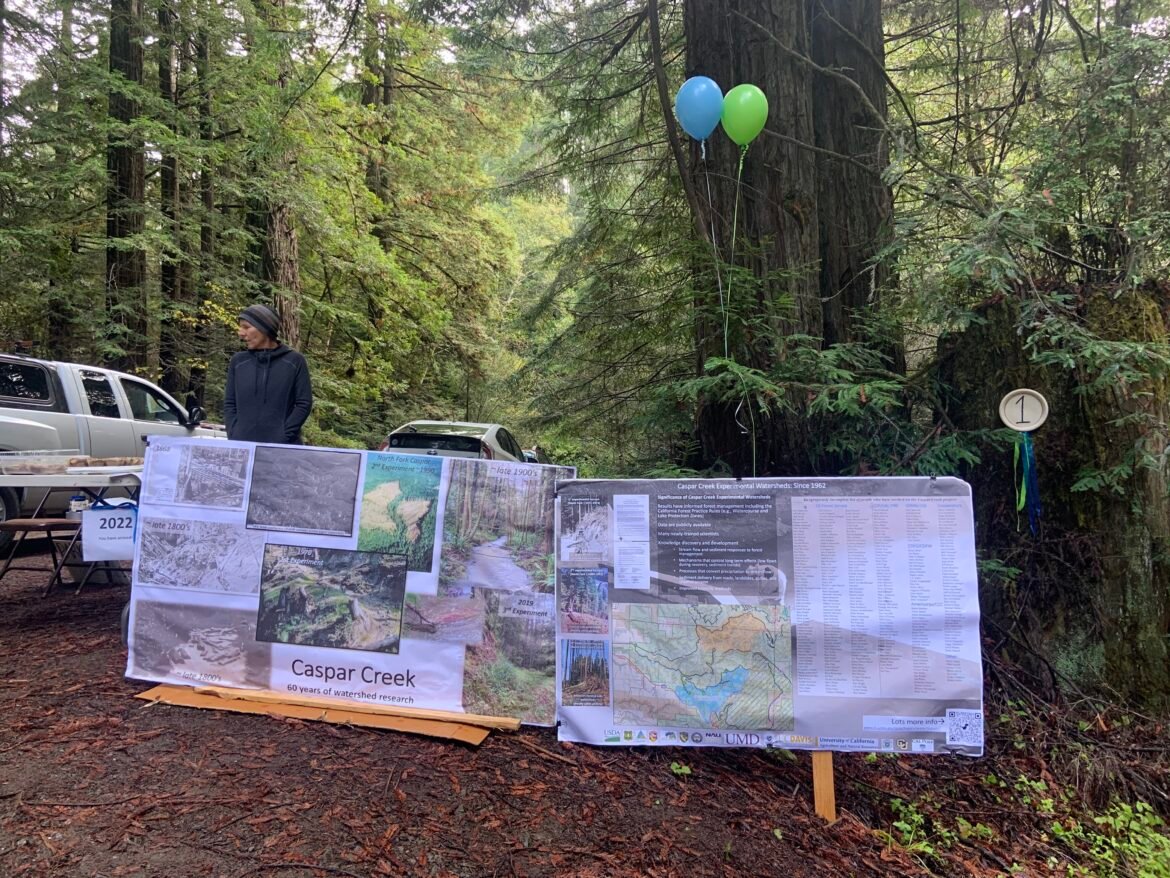 CASPAR, CA, 11/15/22 — The United States Forest Service and Jackson Demonstration State Forest commemorated 60 years of forest management research at the Caspar Creek Experimental Watersheds’ outdoor laboratory by opening the area around the creek’s North Fork and South Fork to the public for tours and exploration on Saturday. Visitors traveled from Caspar Scales along a timeline of eventful years and projects in the area before arriving at stations manned by scientists and researchers, with whom they could speak about the findings and policy developed from work at Caspar Creek.

Plus, 60 cupcakes were on offer for those passing through, each marked with a different year of experimentation in Caspar.

“I feel the event was important because most people in our community know little about this long-term intensive watershed research happening in their own back yard,” Forest Service Hydrologist Elizabeth Keppeler wrote, reflecting on her experience. “It was wonderful to have a casual exchange with our neighbors and to answer their questions about what is happening in the watersheds and forests of the Mendocino coast.”

Work at Caspar Creek began Nov. 11, 1962 with the construction of the North Fork Weir (a weir is a small-scale dam used in this case to measure flow rates in the creek), in preparation for a timber harvest at the South Fork in the early ‘70s. Scientists would compare these two watersheds in the coming decades to understand the impact of logging on stream hydrology and sediment transport.

Sediment disturbances and increased erosion and deposition can affect fish habitat — such as that of salmon and steelhead — and water quality, among other considerations. Questions in this outdoor laboratory have included: How do different logging practices affect streamflow and erosion in a coast redwood forest? How much in-stream sediment is too much, and where does it come from? How do logging roads impact watershed processes?

That first experimental harvest ran from 1971 to 1973 and was a selection harvest at the South Fork, meaning single trees, small groups of trees, or certain types of trees are harvested. This project used primarily ground-based yarding, in which logs are manually felled and transported by tractors or other machinery — and research showed that this interference quadrupled suspended sediment in the South Fork.

By contrast, a harvest at the North Fork from 1989 to 1992 used mostly cable yarding — in which logs are lifted vertically on cables and contact with topsoil is minimal — to study the effects of clear-cutting on a specific tract of land that water flows through, known as the sub-watershed. Sediment yields fluctuated in the years following this timber harvest, ultimately also increasing from the clear-cutting with a particularly high volume seen in a landslide in 2006 from a 1990 clearcut zone.

Cable yarding was used again at a third experimental harvest from 2017 to 2019, in which researchers cut trees using a selection harvest method in the South Fork. Scientists are currently studying the impact of that most recent logging on streambeds, water quality, and water flow in the creeks; results from that research are yet to come. But some recent findings have been published on understory evapotranspiration and how selection harvests reducing tree density influence watershed processes, using data collected at Caspar Creek.

Research at Caspar informed forest management practices such as the establishment of Watercourse and Lake Protection Zones in California’s Forest Practice Rules to safeguard vegetation and prevent soil erosion. Turbidity — or murkiness — monitoring strategies developed at Caspar for tracking sediment loads in streams have been used as far away as Okinawa, Japan.

Well over 300 foresters, researchers, and collaborators have worked on the project, from a variety of state agencies and initiatives. Hundreds of papers have been published on studies and findings at Caspar Creek.

While she doesn’t speak for the Forest Service as a whole, Keppeler said that she is personally excited to see what new discoveries come from Caspar Creek.

“What excites me most about the future of these experimental watersheds is that the collaborative and cross-disciplinary work of so many scientists will yield new information useful to sustainably managing and preserving our coast redwood forest ecosystems in the face of changing climatic conditions and competing societal demands,” she said.

More information about Caspar Creek, including data discovered from decades of research at the site, is available online.