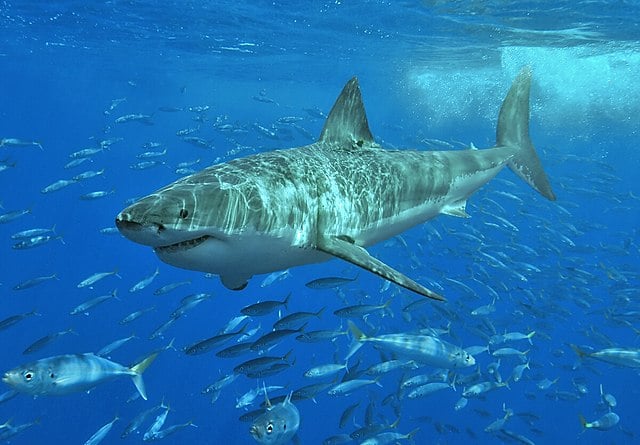 MENDOCINO Co, 10/13/22 — Mendocino County has clocked three shark encounters in just two weeks this October, California State Parks shared following a shark attack in Humboldt County last week. Nobody was harmed off our shores, though, and these curious sharks are typical for October, when “it is normal to have increased shark sightings and interactions,” the state agency advised.

At Virgin Creek in MacKerricher State Park, surfers reported a shark sighting. But some ocean kayakers have had closer encounters; a group at nearby Laguna Point reported a shark bumping, circling, and following their boats.

According to California State Parks’ Instagram post, the most recent incident was reported north of Van Damme State Beach, where a great white shark swam under and circled kayakers. The animal was an estimated 12 to 16 feet.

“Sharks are one of California’s most iconic marine species, and it’s our responsibility to ensure that their populations are sustained,” Assemblymember Steve Bennett said recently, after the passage of his bill, meant to safeguard both great white shark populations and public safety.

In mid-September, the bill passed prohibiting the use of shark bait, shark lures or shark chum to attract a white shark; it also prohibits anglers from using these items within one nautical mile of a shoreline, pier, or jetty when a white shark is known to be present. This will enhance protections for both sharks and swimmers, since an agitated shark close to shore can be more likely to become disoriented and attack people swimming, surfing, and diving.

Tips for safety around sharks from Save Our Seas, shared by California State Parks: