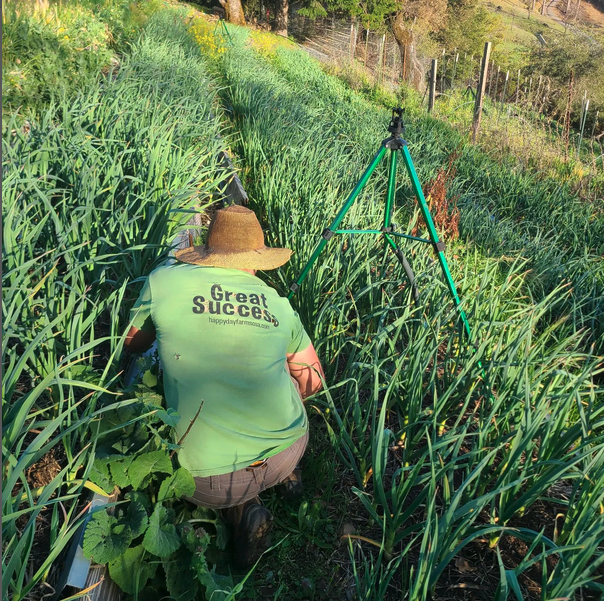 You win some, you lose some. This was a week of deep frustrations and uplifting triumphs, losses tempered by wins that help me stay energized and keep going. After weeks of dealing with a troubling water issue that left a tank empty each morning, I finally solved the conundrum, but not before feeling demoralized and unsure of myself in a most uncomfortable way.

Water systems are like big puzzles, and when something isn’t working you have to piece your way through the possibilities to find the problem. Knowing that I was losing water somewhere in the system, I started with the usual culprits, checking timers and walking the gardens looking for excessive wetness. Sometimes a timer will get stuck on, or one of the easy-loc fittings will pop off but in this case I could find nothing.

The water meter is a useful tool both for tracking water use but also for identifying leaks. I keep a list in my phone of each of the timer locations and duration of run time, so I know when each is running. If I look at the water meter during a time when no timers are running, the meter should be still; if it’s spinning then I know there is a leak in the system.

We farm on two parcels with multiple garden sites on each, and because of the slope almost all of the beds and terraces are at different elevations. This means that we can’t run large blocks of irrigation and instead have to rely on many solar-powered and battery operated timers to run our water systems. On my side, between my place and Pops’, there are 28 timers, with an additional 17 at brother Lito’s.

Managing water and irrigation is a significant part of running the farm, one of the many hats we wear during the course of any given day. Understanding basic hydrology and the mechanics of distribution systems has been a multi-decade learning experience, but even after all this time there are still things that confound me. I like a good puzzle, but you can only bang your head against a problem for so long before it gets old.

The water meter promised that there was no leak in the main gardens, so I headed out to the pasture to check the systems there. The wild pigs have been hammering so I figured there was a decent chance they’d managed to break a line or turn on a faucet (this has happened before). Despite several attempts, I was unable to find any leaks, so we turned our attention to Lito’s to see if we could find a problem there.

Finding nothing in the distribution systems, we began looking at the input systems; sometimes a line from the pump would burst or a pump would burn out, but neither of these options made much sense because the tanks were filling fine, we were losing the water overnight. It’s doubly difficult to deal with water stuff like this because the farm is running full tilt with harvest and carving out time to navigate the issues means something else goes undone.

The wild pigs came back on Tuesday night, smashing through the electric and doing some further rototilling in the pepper and cucumber hoophouses, so when I came out Wednesday morning I had no water and further damage to the remaining summer crops. I felt like crying, which is part and parcel for farming at some point during any season.

Though I had a thousand lettuce and brassica starts that needed planting, I spent the day replacing the electric fencing around the hoophouses with t-posts and hog panels. Brother Lito came through with a crucial evening push to finish pounding the t-posts, and we made some adjustments to set the pig trap.

As daylight waned I decided to take a walk and look at the ag tanks again, hoping to find a solution to the water loss problem. Feeling good after a fence-finished cider, I walked up the hill towards the tanks. Everything seemed as usual, and I had already checked the site once, but I decided to take a more careful look. As I got close I noticed moisture down in a gopher hole and thought to myself “that shouldn’t be there”. The telltale clue gave away the game; I found a fitting that had popped apart just enough that the water was flowing out the bottom, but not in a way that was visible without close inspection, so I had missed it on my earlier go-rounds.

The fitting was on an empty tank on the outlet at the bottom, but below the shutoff valve. Water was back-flowing from the main system up to the bottom of the outlet and then seeping into the ground, a most unexpected development. Pig signs were all over the area, and I deduced that they had shoved the pipe hard enough to pop the fitting, perhaps searching for water or perhaps in search of the acorns from the overhanging oaks.  I fixed the leak and finished the day feeling the glow of triumph; new fence, water system fixed, pig trap set.

A few days later the pigs haven’t come back yet, and the tanks are refilling. I’ve planted the salad mix, though the kales, collards and bok choys still await their turn. I’m learning to accept that I can get done what I can get done, and that’s all there is to it.  As always, much love and great success to you on your journey!