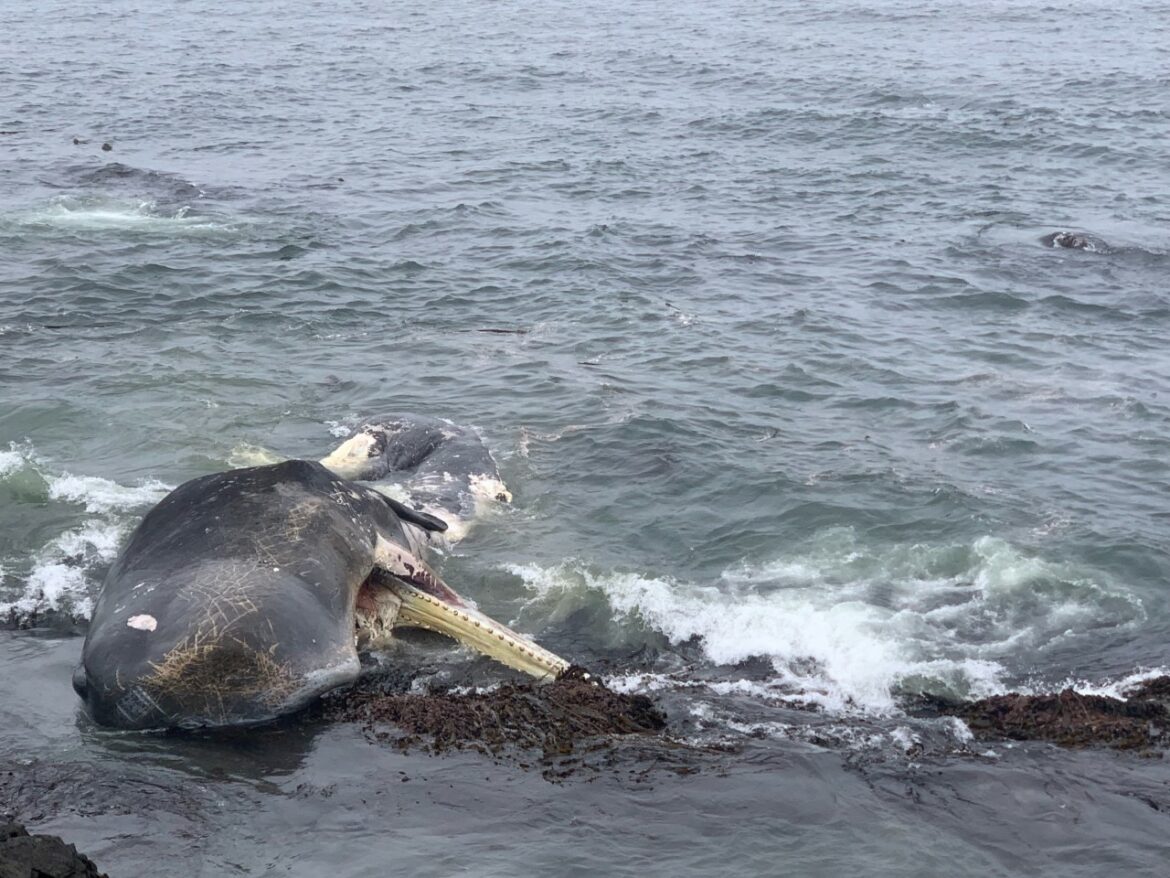 The Noyo Center for Marine Science plans to conduct a necropsy on an endangered sperm whale that washed ashore in Mendocino Friday morning.

By Monday afternoon, the estimated 40- to 45-foot whale was floating near the southern end of Mendocino Bay, and the Noyo Center for Marine Science — with a Telstar Charters boat and a science advisor from Humboldt County — were working to bring it onto a beach or into the harbor.

“They’re in the process of moving it right now, and basically just towing it,” Interpretive Facilities Manager Trey Petrey of the Noyo Center told The Mendocino Voice. “We’re still working on the logistics of what we can do when we get it up to Fort Bragg.”

Researchers from the California Academy of Sciences and Cal Poly Humboldt are on the way, Executive Director Sheila Semans said.

The largest toothed predators in existence and the third-deepest diving mammal, sperm whales are also listed as an Endangered Species — so the chance to study one up close is especially exciting.

“That makes us a lot more eager to get as many eyes on the animal as we can,” Semans told The Voice. “It is super rare and endangered, and they’re just incredible animals.”

Though much of the body is gone, she said the Academy of Sciences plans to use its Scientific Collecting Permit to collect the animal’s skull, which would then be given to the Noyo Center on loan. In information shared with the public Friday, the Center explained that these whales have the largest brain on earth — the animal’s head is around one-third the length of its body.

“There’s a lot that we could do with that specimen,” she said.

Researchers still don’t know this particular whale’s cause of death, Semans confirmed. They expect a necropsy will give more insight into “what’s postmortem damage, and what really killed it.”

“It has some really interesting rake marks on the rostrum — its nose, basically — which has [led to] debate about what could have caused that,” Semans explained. “It could have been an orca, other sperm whales, Humboldt squid, sharks … it’s interesting. And then, it’s basically an empty sock for the bottom half of its body. So, what happened underneath? We haven’t been able to look underneath very easily.”

High tide is the optimal time for bringing the whale onto the beach should they go that route, Semans explained — and given that moving the whale has been slow going, they expect to anchor it tonight and start research tomorrow. Safety concerns in this unique situation have also been top of mind.

“Being around something with as great a mass as a deceased sperm whale just adds to the intrigue of trying to keep everybody safe,” Petrey said. “That’s our priority in all of our straining work, especially since it deals with being in precarious situations in places on rocky cliffs, in or near the water.”

The team expects to have more information on the whale — and its future as part of the Noyo Center’s education and research efforts — in the coming days.

“There are still a lot of mysteries and a lot of things we don’t know yet, and we look forward to sharing them with the public,” Petrey said. “It’s exciting.”

All marine mammal stranding activities were conducted under authorization by the National Marine Fisheries Service through a Stranding Agreement issued to the California Academy of Sciences/Noyo Center for Marine Sciences and MMPA/ESA Permit No.18786-06.

Anyone who finds a dead animal washed up in Mendocino County should reach out to the Noyo Center’s Marine Mammal Stranding Coordinator Sarah Grimes at (707)-813-7925. Those who find a live marine mammal in distress should contact The Marine Mammal Center at (415)-289-SEAL.